I was going to make a point today about performativity and performance... but then I thought maybe I'd already made it. Some scribbled notes on my copy of Brickell's (2005) "Masculinities, Performativity, and Subversion" that I wanted to share, and a quick Google search and I found the blog entry--Day 557 - i think i hear a footstep--in which I typed up my scribbles word-for-word... I suppose you can go read that entry (which, ostensibly, was about Singin' in the Rain, by the way) but the basic gist was that all performance is performativity. That is, everything we do, even our subversions, our revolutions, are defined and confined by what the world tells us we can get away with. I just recently started reading José Esteban Muñoz' (1999) book, Disidentifications: Queers of Color and the Performance of Politics. The gist I'm getting so far to his idea of disidentification is effectively finding your identity in the differences, the opposite of Butler's performativity. Society tells you how to be, and you act out against it. Punk rockers, queers, whatever you are that, you know, society frowns upon--that's where you are. That's who you are. All the times I've looked at commentary on performativity, though, I never really bought into it as rules for how to be, rather guidelines... strongly suggested guidelines, but hey, if you're a freak, you're a freak, why not step outside the lines and be yourself... It's simplistic and utterly complicated at the same time.

Now, a lot of that is straight out of Communication Studies, and I must apologize to you new readers. And, there are a whole lot of new readers checking in this week. Schulman's (2015) The Accidental Swami got a couple new shares online and some new people are here... And, I hope you newbies made it past that first paragraph. This is the 650th day that I've been doing this, watching movies and critiquing them or using them as jumping off points to critique other things. And, I do fall back on Comm Studies stuff often. If I could find more excuses for it, I'd fall back on historical stuff as well--I was a history major before I was a communication major... speaking of which, I'm mixing the two lately in a paper for my American Public Address class, and I'm writing a paper about the group known as the Weather Underground and the rhetoric of bombs, but there's a passage in Weatherman's first communiqué, "A Declaration of a State of War," that's apropos to the discussion at hand, to Hedwig and the Angry Inch, to identity, to the war between performativity and disidentification, or however you want to term being your fucking self, damn the consequences.

Freaks are revolutionaries and revolutionaries are freaks. If you want to find us, this is where we are. In every tribe, commune, dormitory, farmhouse, barracks and townhouse where kids are making love, smoking dope and loading guns... (Dohrn, Ayers & Jones, 2006, p. 150)

I can relate to freaks and revolutionaries. Muñoz starts his introduction with a nice line:

There is a certain lure to the spectacle of one queer standing onstage alone, with or without props, bent on the project of opening up a world of queer language, lyricism, perceptions, dreams, visions, aesthetics, and politics" (p. 1)

And, I don't imagine that Hedwig is using props when she performs. The wigs, the costumes--those have become markers of self, of identity. It's rather evocative that during "Wig in a Box" Hedwig puts the wig the band brings her (and the beehive wig left for her by Luther) over her other wig. She does not strip down to no wig before donning a new one. The first wig is a part of her.

Who Hedwig is changes over the course of the film, even over the course of the "present" in the film. The key to understanding Hedwig and Hedwig is that she thinks she's looking for her other half, as if "The Origin of Love" is literal. And, she thinks she has found it in Tommy. That's why, when she first puts the cross on his forehead and they walk through the trailer to the sound of "I Will Always Love You" their kiss is like a force of nature. Tommy tells her, "Breathe through my mouth" and it's like two halves united, and not only do they breathe together, but in doing so, they cause the wind to blow around them, they cause the trailer's walls to open up out onto the world, and for a moment, "The Origin of Love" might as well be true, Tommy and Hedwig might as well be two halves of the same person. 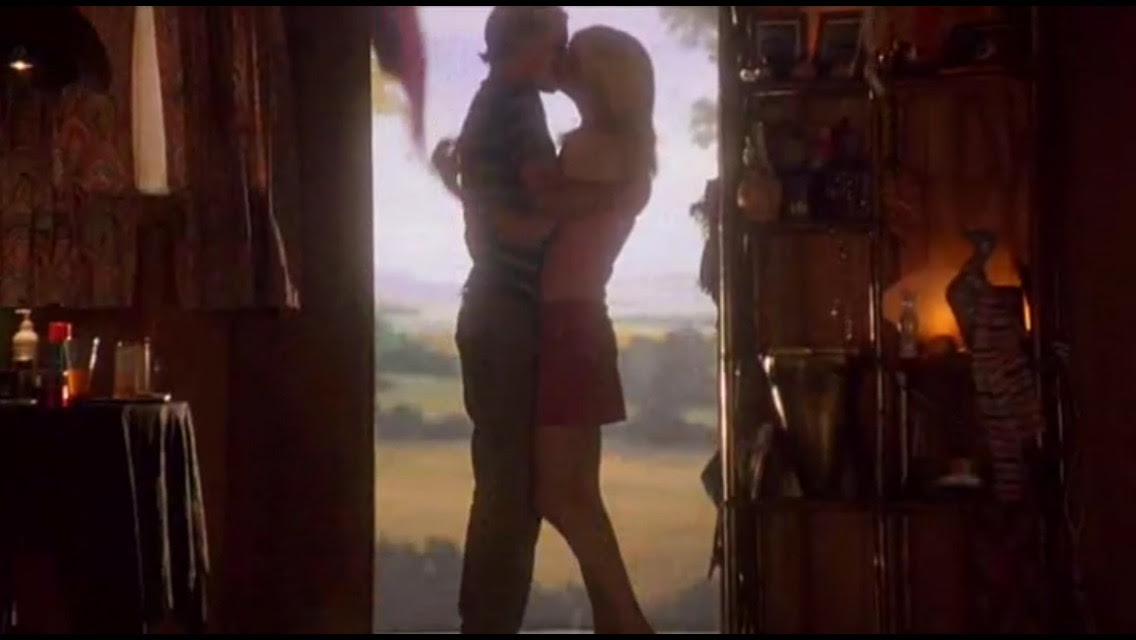 Then Tommy discovers Hedwig's "angry inch" and leaves her alone in the trailer just as Luther did. The illusion of "The Origin of Love" falls apart. Hedwig is not really trying to win back Tommy. Her stalking of him is ultimately pointless as long as she cannot face the fact that Tommy is essentially a portrait of who she was supposed to be. In the end, Hedwig removes the costume, removes the wig, and becomes something new. A new self. Finally, she walks, staggering a little, down an alley into an unknown future. But, she is naked. No Hedwig, No Hansel. No costume at all. No performativity. Just something more like Muñoz' disidentification. The darkness ahead may be unknown, but it is definitely not negative. She can be happy now, happy and complete.