i thought we were going to a costume party

I spent 365 days (plus today is the 10th follow-up viewing) explaining and exploring why I chose (or, in retrospect, needed to choose) Groundhog Day for this blog.

(And, I didn’t set up a recap for the past month—and those entries take more time than a single viewing—so I will recap two months next month... maybe.)

If you want a good idea of what that was all about, start with Day 365 - so this will be the last time we do the groundhog together and work backward. There are some good highlights in that entry alone, with some links to past entries. Or, if you want to be able to see all of the topics ever covered, start with Day 363 - and you’d be an expert and work backward from there instead.

Yesterday I argued that my discussion of films in this blog serves as a deliberate counterpart to discussion of life. I also do it because it’s fun.

Officially, I’m going into my upcoming (starting in the next week or two) reread of all of my entries without a specific goal in mind. I’m using what’s called Grounded Theory to start looking at the posts in order to figure out what is worth looking for. Unofficially, I already know some of what I want to find. I’m looking for notes on my presentation of self, where I inject the personal into the blog... which on some level is almost always, so I will have to code it down to specific types of personal. I also have a feeling that I will need to code for a few other things that demonstrate what I do through this blog on a regular basis. There’s the philosophical stuff, of course—like the eternal recurrence trio of Day 39 - if you could be anywhere..., Day 40 - ...where would you like to be? and Day 41 - probably right here, or that jelly bean bit with Day 52 - if you only had one day to live, or so many other entries along the way... This blog offered me a chance to voice just about any opinion I wanted to express, as long as I could justifiably link it back to, initially, Groundhog Day, then all the other movies since.

That brings me to another thing that will, in some way or another, get on my code list—bragging about how much I know about movies (even when I’m not entirely right or fully informed). For example, with all the various movies in Phase Two, I have often included a day (among the usual seven) in which I elaborate on what was going on at the box office when the movie came out, and I just love to let you know how many of the top 10 or 20 movies that weekend I had seen in the theater, or would see later. I’ve occasionally quoted movies without citing the source—if you’ve seen the movie in question and know it as well as I do, you’d notice, but many probably just read on by, maybe confused momentarily, maybe just not getting the in-joke. It’s exclusionary, and... well, I don’t apologize for it. If you want an all inclusive blog, then get your own. Or just ignore the exclusionary behavior and read all the rest of this thing. Especially the aforementioned philosophical moments—I am what some might call a bleeding heart liberal. When, I get into topics on, say, identity, like I did this past month, I am generally of a mind that, if you’re not hurting anyone, present whatever self you want to present to the world. Be who you want to be. Find your voice and let it sing. 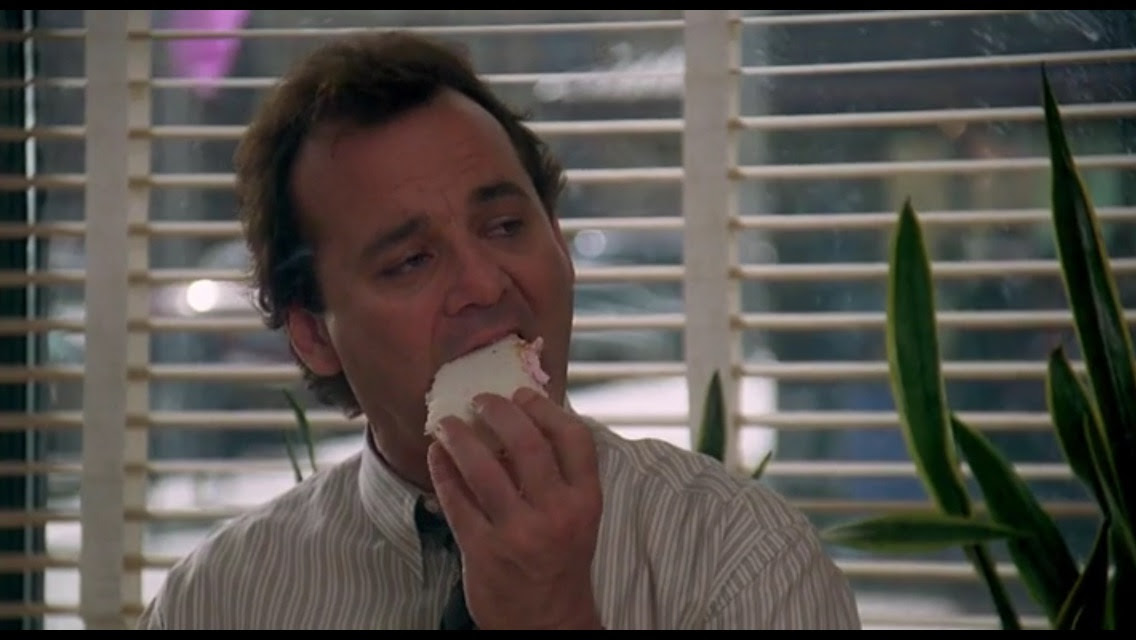 So, in the past ten months, I have watched a lot of movies for this blog. Leaving behind the various films I watched and specifically wrote about during Phase One, I watched The Ring, The Sixth Sense, The Blair Witch Project and Scream for month one... along with Ringu, Rings, The Ring 2, Book of Shadows: Blair Witch Project 2, Scream 2, Scream 3 and Scream 4. Then, I watched When Harry Met Sally..., Moonstruck, The Mirror Has Two Faces and Pretty Woman. I think the only extra film I threw into that month was the PBS presentation of La Boheme. There were no extra movies in month three because rather than spend 7 days with each film, I watched 33 slasher films (because that first month of horror films wasn’t enough) in 33 days—Peeping Tom, Psycho, Prom Night, plus four Texas Chain Saw Massacre films, eight Halloween films, seven Nightmare on Elm Street films, ten Friday the 13th films, and finally the Freddy vs. Jason crossover. Month four happened to be November so I went with Thanksgiving films—sorry to those outside the United States. I watched Planes, Trains & Automobiles, Dutch, Pieces of April and Home for the Holidays. If—and that’s still a decision to come—I’m still doing this blog this November, I will have a more interesting theme. December was all about Christmas, with a bit of a slasher film flashback. I watched Home Alone, Black Christmas (with the addition of the remake of Black Christmas), National Lampoon’s Christmas Vacation (with the addition of the original Vacation and European Vacation) and A Christmas Story (with the addition of Ollie Hopnoodle’s Haven of Bliss, A Christmas Story 2 and My Summer Story. The new year brought us action films from the 1980s—Lethal Weapon, Die Hard, Commando, Rambo: First Blood Part II and the bonus film (for the sake of timing with Groundhog Day), Top Gun. I didn’t add extra sequels or anything because it was Oscar season and I was catching up on all of those movies.

I’d like to say that I remembered all of this order without having to look things up, but that would be a lie.

The next month was musicals—Singin’ in the Rain, West Side Story, Moulin Rouge! and Across the Universe. Then came high school movies from the 80s—Porky’s, Fast Times at Ridgemont High, Ferris Bueller’s Day Off and The Breakfast Club. Then, things got weird again, with a month of movies recommended by other people, readers, friends, family. The month included The Room, Flash Gordon, Westworld, The Wicker Man, Rent, After the Dark, The Grand Seduction, Speed Racer, The Notebook and (500) Days of Summer. And, this past month offered up some movies that dealt with identity—Eternal Sunshine of the Spotless Mind, Hedwig and the Angry Inch, Toy Story and Stories We Tell. I also watched Toy Story 2 and Toy Story 3 and five Toy Story shorts. And, just this morning I watched Take This Waltz, which I mentioned yesterday.

And, I may have missed some of the extra movies in that list. (And, I didn’t even mention the extra movies during Phase One, like Scrooged or Edge of Tomorrow or About Time, or Mr. Nobody (also mentioned yesterday) or Doc Hollywood or Caddyshack or numerous others.)

And, I’m avoiding the issue by listing all of this stuff. We’re coming down to the last day of the time loop—Phil’s actually working on the piano right now—and I haven’t gotten back around to my point.

What is my point?

This blog has been (and will be for at least another two months) a place for me to express my interest in movies and use that interest to explore just about anything else I have liked to explore. That being said, I often brought everything back down to a few themes—gender roles, identity and the presentation of self, and something like self improvement. Whether it is because of this blog alone—and this right here can come up in the limitations section of my master’s thesis—or because of grad school or because my living situation improved, or some combination of all three of these things, my life improved as this blog went on. And, I suppose I wish that, with all of my philosophical rants and whatever else it is that I have had to say for 668 days now, I would have helped or inspired someone else to fix his or her life as well. I would rather the world be better than it was when I got to it. I would rather say positive things—with the occasional bout of negativity to keep things honest—and make the world a better place than just type and type and type into the ether with nothing to show for it.

That is who I am today. It is not a costume I put on, though maybe it’s a part I play. It is not some new aspect of my identity, but is an aspect that has had a lot more energy in recent years. And, I am happier for it.

I don’t have the chance to save and improve lives left and right like Phil Connors on those last days of the time loop, but I have found myself in a position—as father, as teacher, as coach—that affords me the opportunity to help others shape their lives into something good. I hope I can live up to that responsibility. I know I will try.

And that sounds so conclusive… I’m wondering what I’ve got to talk about for another two months (at least).

Those who have been reading along will know, I will come up with something.

(This next month has a whole lot of extra movies planned ahead, for example, because summer break is coming.)