love the front of me, honey

I've already pointed out how the musical offers "the greatest illusion of spontaneity and effortlessness" (Feuer, 1995, p. 447). Additionally, it offers timelessness, even in the midst of its story. The stage version of Hedwig, I've heard, is set during a single show, with the asides and flashbacks (and I hope animations) drawing on that. This film version offers several different shows and a linear plotline that covers probably less than half the film, with the flashbacks and asides and animations adding to that plotline even as they pull away from it. Flashbacks as memory--they don't exist in the past, they exist in the present.

(I remember in my Media Theory class last quarter, we were talking about Groundhog Day, which happened a few times, and whether or not it was "Classical Hollywood Cinema." The professor had a problem with the nonlinear structure, but I argued that the film is actually quite linear. Phil's story is linear. It's just time around him that isn't.)

Hedwig's story is linear. It doesn't matter that we get flashbacks. Those flashbacks are not events happening in the past. Not really. They are happening in Hedwig's head in the present. It's like the whole show is just a long therapy session for Hedwig. Tell me about your childhood. Tell me about your mother. That sort of thing. I'll probably explore "The Origin of Love" from a mythological perspective in the next few days, but I think it's important to look at it (and the flashbacks) from a psychological perspective. Mulvey (1989) would love this movie.

I won't assume that you're familiar with Mulvey. Though I'd heard her referenced before by so many film critics, I never actually read her piece until this year. Mulvey applies psychoanalysis, particularly Freudian. Mulvey spends a bit of energy and time and words on the idea of the "image of the castrated woman." She writes:

An idea of woman stands as lynch pin to the system: it is her lack that produces the phallus signities... the function of woman in forming the patriarchal unconscious is twofold, she first symbolises the castration threat by her real absence of a penis and second thereby raised her child into the symbolic.

I don't know about that last bit, but the rest raises some interesting issues in regards to Hedwig. Hedwig, of course, is by all the usual definitions, not really a woman, nor any longer a man. As the character's creator tells the Toronto Star, "Hedwig didn't choose her fate, but her wound created something absolutely unique." In Mulvey's terms, Hedwig absolutely embodies that castrated woman. Maybe a bit too literally, in fact. Her begging Tommy to "love the front of me" is the lowpoint for this story. Arguably, she can't even love herself. She needs Tommy to love her, to be her other half (per "The Origin of Love"). But, go back to the beginning of the "Origin of Love" sequence and you'll see in Hedwig's "first diary, age 2 to 6" that each of the people that have touched her in her life are depicted the same way. On the one hand, spooning is nice, but there's also the potential implication that these people have "touched" Hedwig inappropriately. I don't think that's what Mitchell had in mind... 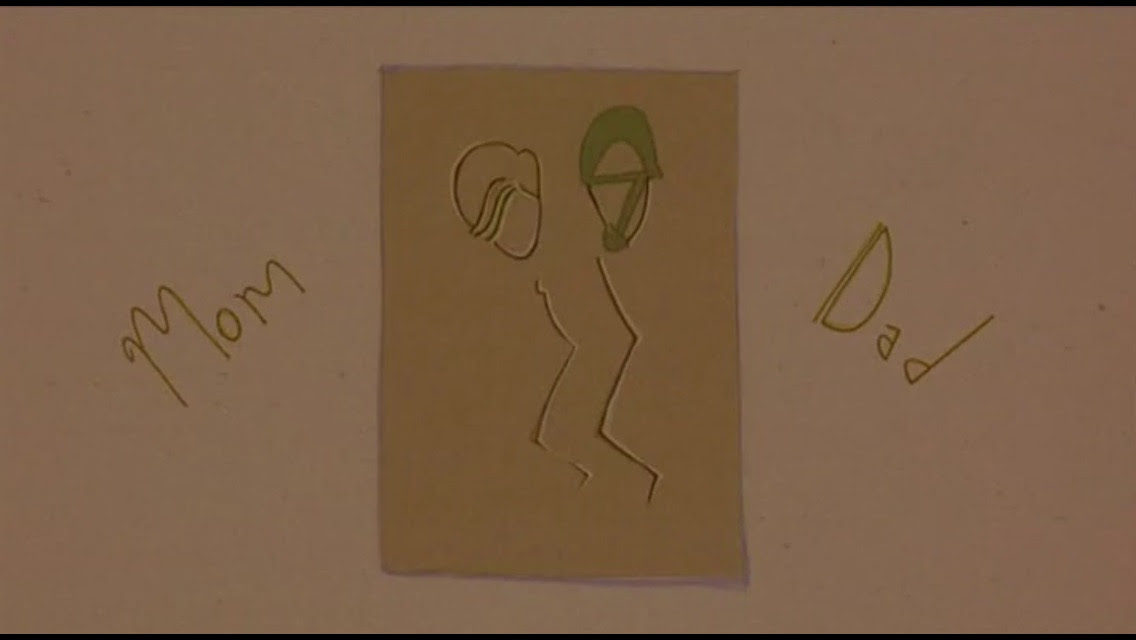 But there is a negative implication to all of these people not facing one another, to Hedwig's mother and father not facing one another, to Hedwig and Yitzhak not facing one another, and Tommy "maintain[ing] a near perfect ignorance of" Hedwig's front. It's perhaps, also the reason the people in "The Origin of Love" knew nothing of love; they couldn't face each other. Couldn't look one another in the eye. The climax of the film, after all, is Hedwig, stripped of her feminine costume, facing Tommy in the dark. In that moment, they are virtually identical. Hedwig has found (and lost) her other half... Or, given the setup for the very next scene, she has become her other half. Before, ever since the botched operation, since Luther left her behind, she has been stuck as half a person, struggling with her identity. In the end, she finds herself.

(In doing so, she can also allow Yitzhak some space, offering him her wig.)

Mitchell explains that Hedwig is "about the possibility of art healing, of love mixing with art to find some kind of wholeness and peace... She's more than a woman or a man. She's a gender of one and that is accidentally so beautiful."