you can't be ugly

"What a loss to spend that much time with someone, only to find out that she's a stranger." This comes from Joel's Lacuna tape just before he goes into the hallway to get Clem to stay at the end of the movie.
I don't think it's a loss. The intervening time is worth it. 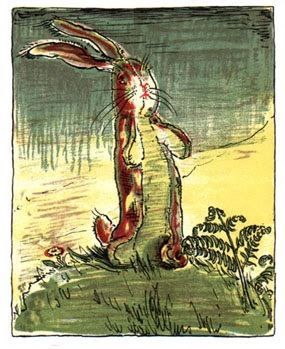 I just read The Velveteen Rabbit this evening. For the first time, by the way. The original version, anyway. In case you don't know what that has to do with Eternal Sunshine of the Spotless Mind, there was a monologue about the book. Part of the scene remains but none of the reference to The Velveteen Rabbit. Originally, Clem, in bed with Joel, asks if he knows the book.

CLEMENTINE
It's my favorite book. Since I was a kid. It's about these toys. There's this part where the Skin Horse tells the Rabbit what it means to be real.
(crying, then laughing at herself)
I can't believe I'm crying already. [That line sticks around.]
(reading from a worn copy of the book)
He says, "It takes a long time. That's why it doesn't often happen to people who break easily or have sharp edges, or who have to be carefully kept. Generally by the time you are Real, most of your hair has been loved off, and your eyes drop out and you get loose in the joints and very shabby. But these things don't matter at all, because once you are Real you can't be ugly, except to people who don't understand."
She's weeping. Joel is stroking her hair. They kiss and begin to make love under the blanket. It's sweet and gentle and then it starts to fade.
JOEL
(screaming)
Mierzwiak! Mierzwiak!


He's yelling for Howard. This intimate moment, this emotional beat, is the turning point. From here on out, Joel wants the procedure to stop. The relationship has been erased back far enough that the memories are positive. The moments are moments that he wants to keep. Earlier (later), Clem asks Joel if it makes him sad that his journal is blank because she wants to live every moment. She lives in the moment. Meanwhile, much of this film is about she and Joel trying to escape the moments, to exist outside the moments they had together in order to keep their relationship alive.
That moment that turns things wasn't playing right, so Gondry told Kaufman to write something new, but using the footage they had from the scene (and eventually including a lot of cutaways and closeups with a doll). In the commentary, Kaufman says he had 15 minutes to do this rewrite. What he came up with is the scene we see in the movie... Instead of asking about The Velveteen Rabbit, Clem asks if she's ugly.

CLEMENTINE
When I was a kid, I thought I was. I can't believe I'm crying already. [There's that line.] Sometimes I think people don't understand how lonely it is to be a kid, like you don't matter. So, I'm eight, and I have these toys, these dolls. My favorite is this ugly girl doll who I call Clementine, and I keep yelling at her, "You can't be ugly!" [Another kept line.] "Be pretty!" It's weird, like if I can transform her, I would magically change, too.
They kiss.
JOEL
Mierzwiak, let me keep this one memory.

Michel knew I that I would be excited by it. Such a challenge. So I wrote this thing, and it turned out to be a scene that people talk about as being a really moving moment for them. And its completely constructed, completely manufactured. Every once in a while [twice] you cut to Clementine saying a couple of words, but mostly you're on Jim's face and the dolls. Michel cut more than he had to. I actually did a pretty good job of rearranging the words in the original speech.

Maybe he kept more than just those two lines and Gondry cut some out. I can't be sure because the "Shooting Script" still includes the Velveteen Rabbit bit. Both scenes work really well as far as telling us about Clem and the whole situation, about relationships and getting (something) out of them. On the one hand, the doll bit that exists in the film--Clem projects onto her ugly doll her own insecurities and she tells this story to reach out to Joel for reassurance. Similarly, in relationships, we do the same thing, put our insecurities on each other, reach out to one another for reassurance. This moment is perfect as the turning point because it involves that reaching out. It's not the healthiest of relationship setups (apparently) but Joel has reason in this particular moment to want to save Clem, to let her know that she is, in fact, pretty. But, not just the obvious physical prettiness; it's also a stand-in for all that's (potentially) good about Clem, or about anyone. Why else do we get together with anyone? It makes us feel more complete, it makes us feel, if nothing else, that we're good enough to be worthy of the attention...

(That seems like it might have come out wrong. But, what else is this blog here for but for me to explore all of these films' ideas about stuff like this and my own ideas about stuff like this. It doesn't matter if it always makes perfect sense, or if even comes across as right. It just needs to... Let me just say, I'm more Clementine than Joel as I write, I think. I'm in this moment, this entry, this time and place...
But, I suppose I'm Joel as well, using an entry like this one to exorcise old demons, explore my current thoughts on stuff like love and romance and relationships to figure out what I used to think, how that became this. I might not be the best judge of how relationships work. I admit that.)

On the other hand, there's the Velveteen Rabbit bit from the script. Again, Clementine projects her own insecurities onto an inanimate object... except this time an animated inanimate object, the titular Rabbit. And, I'm reminds of the Skin Horse telling Rabbit that becoming Real "doesn't happen all at once... You become. [And, he gets into some of what Clem said in the script.] It takes a long time. That's why it doesn't happen often to people who break easily, or have sharp edges, or who have to be carefully kept." Clem certainly has sharp edges. Joel seems like he might break easily. I know that back when I got together with my then-future and now-ex wife, I was the type to break easily. I was the type to want to be completed by my partner. But, damaged people don't get to be Real like so many of the non-damaged ones. "Generally," the Skin Horse continues, "by the time you are Real, most of your hair has been loved off, and your eyes drop out and you get loose in the joints and very shabby..." Your appearance doesn't matter so much anymore after the relationship keeps going. The longer you stay together, the more you don't have to try. You can simply be. Later, Rabbit thinks, "when you are Real shabbiness doesn't matter." When you're in love, when you're into a relationship, shabbiness doesn't matter. As Skin Horse says, "once you are Real you can't be ugly, except to people who don't understand." Your partner, when things are going well, knows you, understand you, accepts you. You can't be ugly. Not anymore.

Clementine and Joel--they only become Real when they're together. Maybe Real isn't always a good thing; Real allows for good and bad. But, the alternative is, well, something else. Picture the Rabbit in the garbage heap, waiting to be burned. That's life alone.
Well...
That's life alone when you don't want to be alone.
Sometimes, alone can be pretty good. But, that's a topic for another day.