every christmas and birthday we go through this

Let us just get this out of the way on Day One. Buzz Lightyear is a cinematic Christ-Figure. Or Woody is... maybe.

Buzz is 1 tangible and 2 central and definitely an 3 outsider. He is not, strictly speaking, 4 divinely sourced, but as the toys' primary life (and there's a whole discussion to be had there) is with Andy and Buzz was given to him by his mother... well, that is an outside enough source to qualify. 4/4

No 4.5 miraculous birth... that I know of. But, since Buzz never knew his father, maybe there's something there (but that is outside this particular text--the original Toy Story).

Buzz definitely has 7 twelve associates. (Remember, it doesn't have to actually be twelve because most movies cannot handle that amount of main characters.) Even in this first Toy Story film, there's already a good supporting cast of characters. 7/7

No point for 8 holy age, but Buzz definitely has a 9 judas-figure in Woody. 8/9

Buzz gets no 10 mary magdalene-figure in this film--the cast of toys is almost entirely male; the notable female, Bo Peep, seems to have a thing going with Woody. Although she is quite taken with Buzz when he flies. "I found my movin' buddy," she proclaims. No 10.5 virgin mary-figure either. As impressed as Mr. Potato Head and Ham are with Buzz's wings and lights, I'd say they collectively qualify as a 11 john the baptist-figure. 10/11

Buzz is believed to be dead when Woody knocks him out the window, so there's definitely a hint of 12 death and resurrection, and the 13 triumphalism point goes hand in hand with #12. 12/13

Buzz performs 14 service to lessers as a Space Ranger, but also in helping out the various toys, including eventually Sid's mutated toys. Buzz does not commit a 15 willing sacrifice, but he does suffer some 15.25 torture, mostly psychological, but he also loses an arm. No 15.5 stigmata or 15.75 atonement. And, it's Woody, not buzz who is accused of a crime he did not commit, so Buzz cannot have the point for 16 innocence either. 14/16 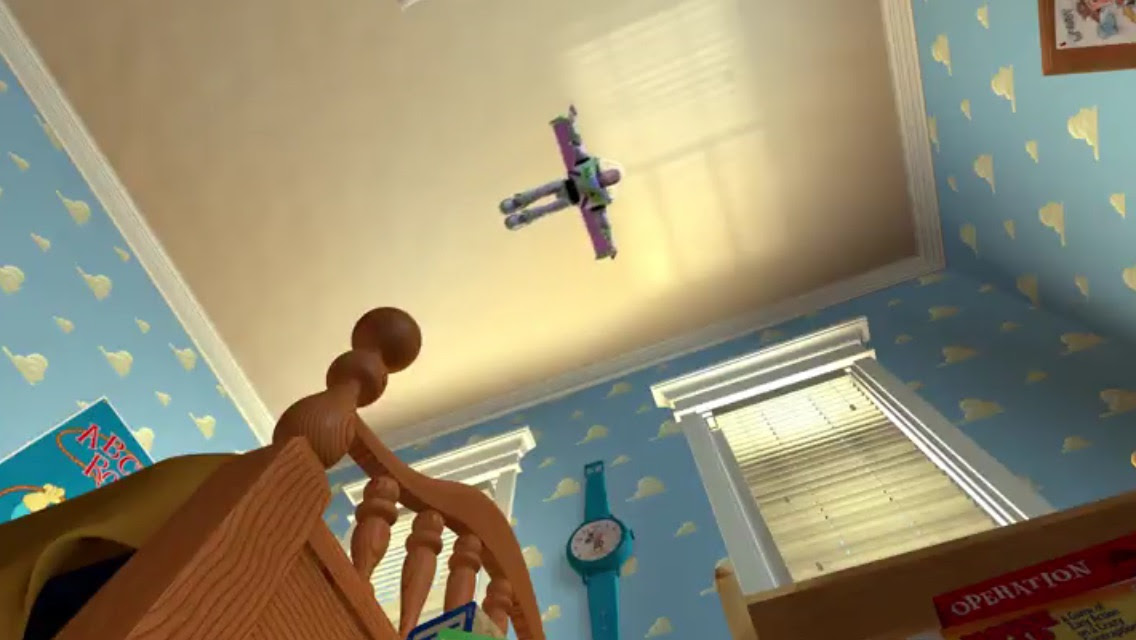 --and he's got a cross on his back for 18 cross associations. And, that cross means he can also fly, which is pretty good for 19 miracles and signs. 17/18 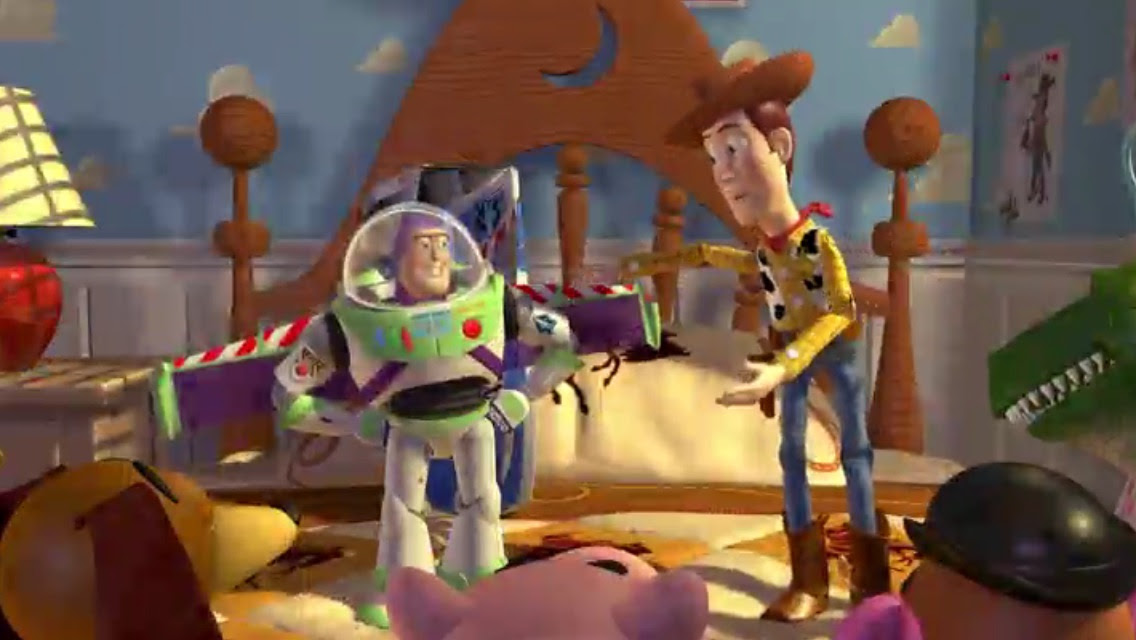 Buzz's amnesia--which probably isn't the right word for whatever dissociative thing he's got going on--qualifies him for 20 simplicity. But, 21 poverty doesn't really come up, nor is 22 jesus garb a thing for Buzz. He does have 23 blue eyes. 19/23 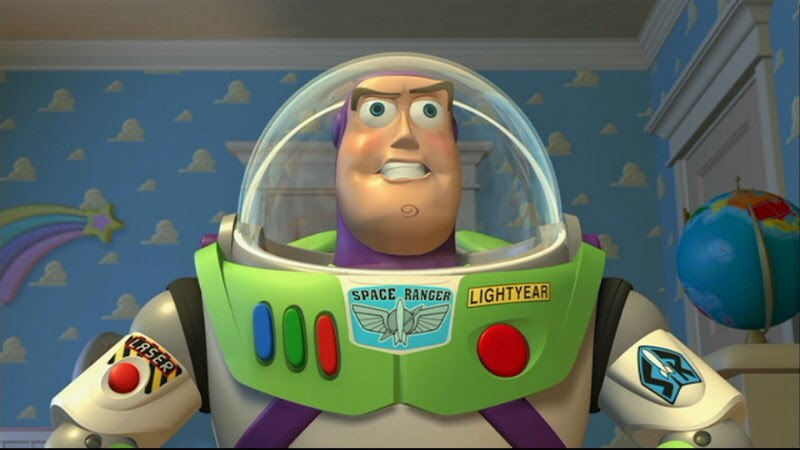 This is a nice wholesome animated film for which there was plenty of time to go over the script, so there are no 24 holy exclamations. And, Buzz Lightyear clearly doesn't have 25 j.c. initials. Final score: 19/25. Pretty good, except inasmuch as I am proving time and time again--except for the past two days with Hedwig, of course--that Larsen (2013) has a point and the Kozlovic-Black scale doesn't necessarily mean anything. Perhaps "it adds religiosity and resonance" as Larsen puts it, but maybe the point is that the story's have resonance and that's why the Christ story copies them.

Not literally, of course, here, because Toy Story was released a long time after the Holy Bible. My point is that most of these elements just make logical sense if you want your central character to be special. And, we do want out main characters to be special. It makes sense that they be outsiders as well, because we probably want to imagine that removed from our own humdrum lives we might be awesome in new circumstances, that we might be that special outsider. And, skills that seem ordinary in the life we have now might seem like miracles in new circumstances.

I don't think that Buzz is deliberately a Christ-Figure, nothing like Superman in Man of Steel anyway. But, characters like this have resonance for the same reason that stories are told and retold and we enjoy them. This is arguably a film for children--not entirely, but that's beside the point--but even children need their characters to be special. They need there to be some implication of importance to the story. There are only a few elements on the Kozlovic scale that specifically point to the story of Jesus Christ, and even those few are debatable. A Judas-Figure, for example--that's a worthy element in most any story; it offers a good twist to the plot, something to mess with the audience's expectations. The miraculous birth--that's just basic mythmaking, a signal for the audience that something special is about to happen. Death and resurrection--that's the best way to demonstrate just how special the character is, and it upends what may seem like a devastating turn of events in the death of a hero. Twelve associates--most any good adventure needs a good supporting cast. The Encyclopedia of Fantasy has an entry on "Companions" the hero takes or finds on his journey, divided into two sub categories (both of which we will see next month, for sure)--a "Dirty Dozen" or a "Seven Samurai" grouping. The various companions' specific talents can be employed to further the plot or get the hero out of a bad situation. For example, RC just came in handy to help Woody and Buzz catch up to the moving truck. In Toy Story 2, the toys use Slinky Dog's stretchy body to get to the ground. It's as if classic stories (and new versions of the same) want us to think it's important to have friends around with skillsets beyond our own. Certainly a useful thing in any reality.