face down on a piece of broken church

There's danger ahead. See, I want to run Hedwig through the Kozlovic-Black scale, but I know my arguments regarding 15.75 atonement might offend some. Or should.

Anyway, let's just do this. 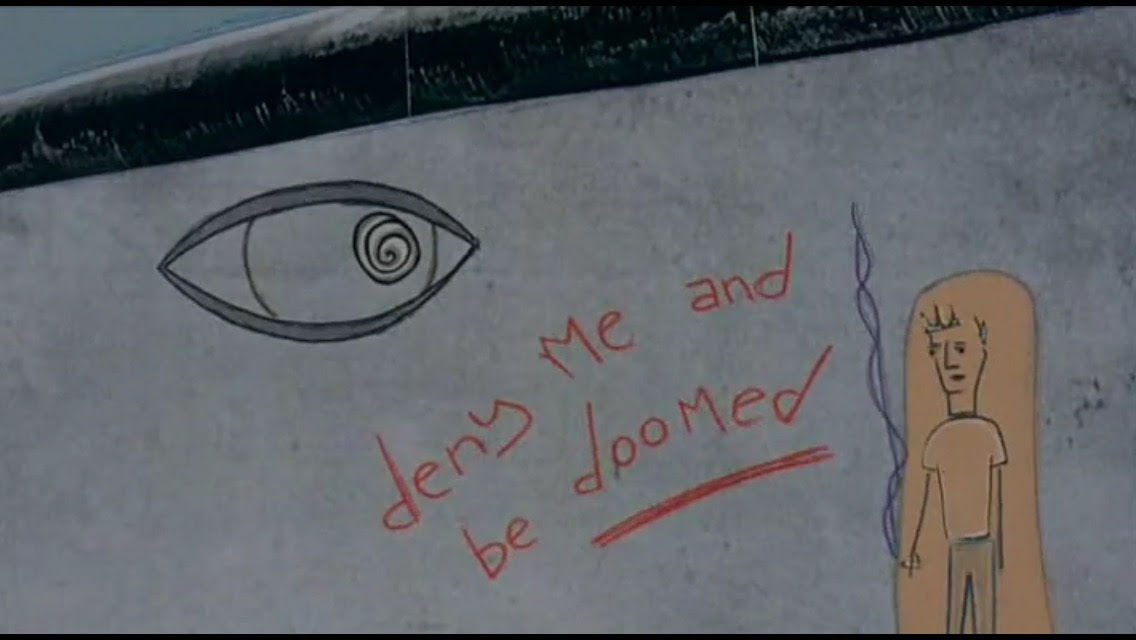 Regarding 4 divinely sourced, Kozlovic (2009) explains, "Christ-Figures usually arrive onto the scene through some form of deliberate outside intervention, sometimes by a distant God-figure" (p. 6). The stress there is mine because obviously Hedwig is not in America because of a distant God-figure. He's there because of Luther... who coincidentally shares a name with the founder of a branch of Christianity. There is outside intervention. 4/4

Hedwig's birth is not exactly a 4.5 miraculous birth but Hedwig is born from Hansel because of an accident. I'm driven to Merriam-Webster for what should be a basic concept--miracle. The first definition is "an extraordinary event manifesting divine intervention in human affairs." The second definition is "an extremely outstanding or unusual event, thing, or accomplishment." The botched sex change operation certainly fits the second definition, but does it fit the first? "The Origin of Love"--taking its cue from Aristophanes in Plato's Symposium--suggests that we are all incomplete because of divine intervention... Indirectly, Hansel's surgery is the result of divine intervention because there was no other way for Hedwig (nee Hansel) to be with Luther, to attempt completion. I'm going to give her this one. 5/4

Hedwig/Hansel definitely qualifies as an 5 alter ego and a 6 special/normal division. 7/6

For anyone who hasn't seen one of these Christ-Figurings before, you should know that 7 twelve associates does not mean that the (potential) Christ-Figure needs twelve close associates, just a close circle of obvious associates that stick with him/her through the story. The members of the Angry Inch would qualify this one, even if Hedwig did not also have recurring fans as the various shows happen through the film. 8/7

The next one is a little convoluted. Hedwig's "'divine' mission" does indeed sttart at the 8 holy age of 30. "Wig in a Box" happens in 1989 when the Berlin Wall is being torn down. That wall went up in 1961 after Hedwig would have already been age 2 because his father was in his diary for "age 2 through 6." So, Hedwig was born approximately 1959, making him 30 when he starts singing. 9/8

Tommy Gnosis serves as an easy 9 judas-figure. And, his name makes for an interesting religious mix, Tommy for "doubting Thomas" and Gnosis for the Gnostics. Thomas, of course, doubted Christ's resurrection, and the Gnostics seek oneness with God through the spiritual world (or something like that; I'm not an expert on the Gnostics). Yitzhak, though apparently male (but portrayed by a female) serves readily as a 10 mary magdalene-figure for Hedwig's Christ, "a sexually tagged" woman who cannot express her sexuality with Hedwig. 11/10

I don't know if Hansel's mother can be a 10.5 virgin mary-figure; she is not virginal or innocent, though she is without a husband. But, this is one of my additions to Kozlovic's scale, so it's absence will not hurt Hedwig's score. Phyllis is clearly the 11 john the baptist-figure, pointing the way to Hedwig. 12/11

Hedwig cannot have points for either 12 death and resurrection or 13 triumphalism except perhaps in metaphor. If Hedwig was born on the doctor's slab, then Hedwig does die during, appropriately, "Exquisite Corpse." Then, Hedwig faces judgment before Tommy. Not by Tommy, but Hedwig must survive facing Tommy as himself before the triumphalism of "Midnight Radio" sung in a heavenly white space. 14/13

Regarding 14 service to lessers, my impulse was to not give this point to Hedwig because she is such a bitch to her band members, holding their passports hostage so they cannot leave. But, then I looked at Kozlovic's (2009) description again; he writes: "The sacrifices made by Christ-figures specifically benefit others and are based upon higher principles." What sacrifice does Hedwig make? Or rather, what sacrifice does Hansel make? He sacrifices his manhood for love. Definitely a "higher principle." (And, there's another sacrifice, detailed in the next paragraph.) Also, this was a 15 willing sacrifice 16/15

Hedwig suffers no literal 15.25 torture, bears no 15.5 stigmata, but most definitely serves 15.75 atonement. Larsen (2013) argued that "identifying Christ figures almost always brings more to the movies at hand than it does our understanding of Christ. It adds religiosity and resonance (even if neither are intended [as if intent matters if interpretation overtakes it]), yet rarely informs our faith. As a theological exercise, Christ-figuring is a one-way street." Maybe as a "theological" exercise, but as a cinematic exercise or a spiritual exercise, giving a character power outside the literal text of the film certainly informs whatever the film-going equivalent of faith is. Yes, it adds religiosity and resonance. And, like Gummi Bears, it tastes like power. As for atonement, Larsen tells us, "At the movies, Christ figures will sacrifice themselves to save another--or maybe even all humankind--but they rarely do so to atone for the fallen state of others. If we take that away, what's left?" Within the text of Hedwig and the Angry Inch, Hedwig's final sacrifice, giving up the pretense of being a woman comes from anger, but that standoff between Hedwig and Tommy serves as judgement for them both. Not only does Hedwig pass the test of it, so does Tommy because Hedwig is no longer hiding anything. His sacrifice does atone for Tommy's "fallen state." Tommy has stolen Hedwig's music, has lied to the public. Hedwig's acceptance and forgiveness atones for this. Outside of the text of this film, Hedwig's struggle atones for something much larger. Hedwig serves as a symbol for every freak who cannot be who he or she wants to be because society disallows it. Specifically in regards to sex and gender, Hedwig's inability to be himself, and Hedwig's choice to be herself serves to inspire freaks like her, anyone who is restricted by society's standards. The sins Hedwig "dies" for are the sins of the restrictive powers that be, and all of us who keep fueling that system by doing nothing to change it. I'm reminded of "La Vie Boheme" from Rent, the entire song really, but particularly these lyrics from Mark:

Anyone out of the mainstream
Is anyone in the mainstream?
Anyone alive with a sex drive
Tear down the wall
Aren't we all?
The opposite of war isn't peace
It's creation

And, we'll finish the Christ-Figuring tomorrow.

Maybe. I think the point may have been made already. Hedwig may be the perfect cinematic Christ-Figure.