The commentary track includes director Michel Gondry and writer Charlie Kaufman. It starts amusingly. Gondry describes the action on screen as Joel gets out of bed and Kaufman wonders if he's just going to narrate the whole thing.

As I listen to them discuss when they thought they might film in Canada, I find myself also looking at the book, Eternal Sunshine of the Spotless Mind: The shooting Script. Gondry writes the introduction, and he's got some outlandish ideas that... well I'll let him tell you.

It all started at a Brussels restaurant when my friend and artist Pierre Bismuth challenged me with this concept: "What if in your mail you find a kind of official card stipulating: 'We are acknowledging, Monsieur Gondry Michel, that Lisa Brook had you erased from her memory. Please don't try to reach her.' ...

They point out how Clementine invades Joel's personal space on the train. Gondry suspects it was Jim Carrey and not Joel Barish who didn't want her that close and her punch and his response were genuine, in the moment. The invasion of space reminds me of When Harry Met Sally..., but with the sexes reversed. Here, the female is the one who gets too close, too immediately intimate. There, it was Harry.

And, the layers tonight are confusing... -ish. The dialogue in the film at a low volume, the commentary track over it. Subtitles. These things to my right. Directly in front of me, my iPad, this blog entry. To the left, the book.

Gondry makes an interesting point about the snow. It is just starting to snow, for example, after Joel leaves Clementine's apartment at the beginning of the film. Gondry says that it brings a great energy to the crew, rushing to stay ahead of the snow, to capture that snowfall but not have the continuity problem of too much snow in some shots/takes.

Gondry put the actors next to the crack on the ice for realism but it "became" a symbol for this relationship. 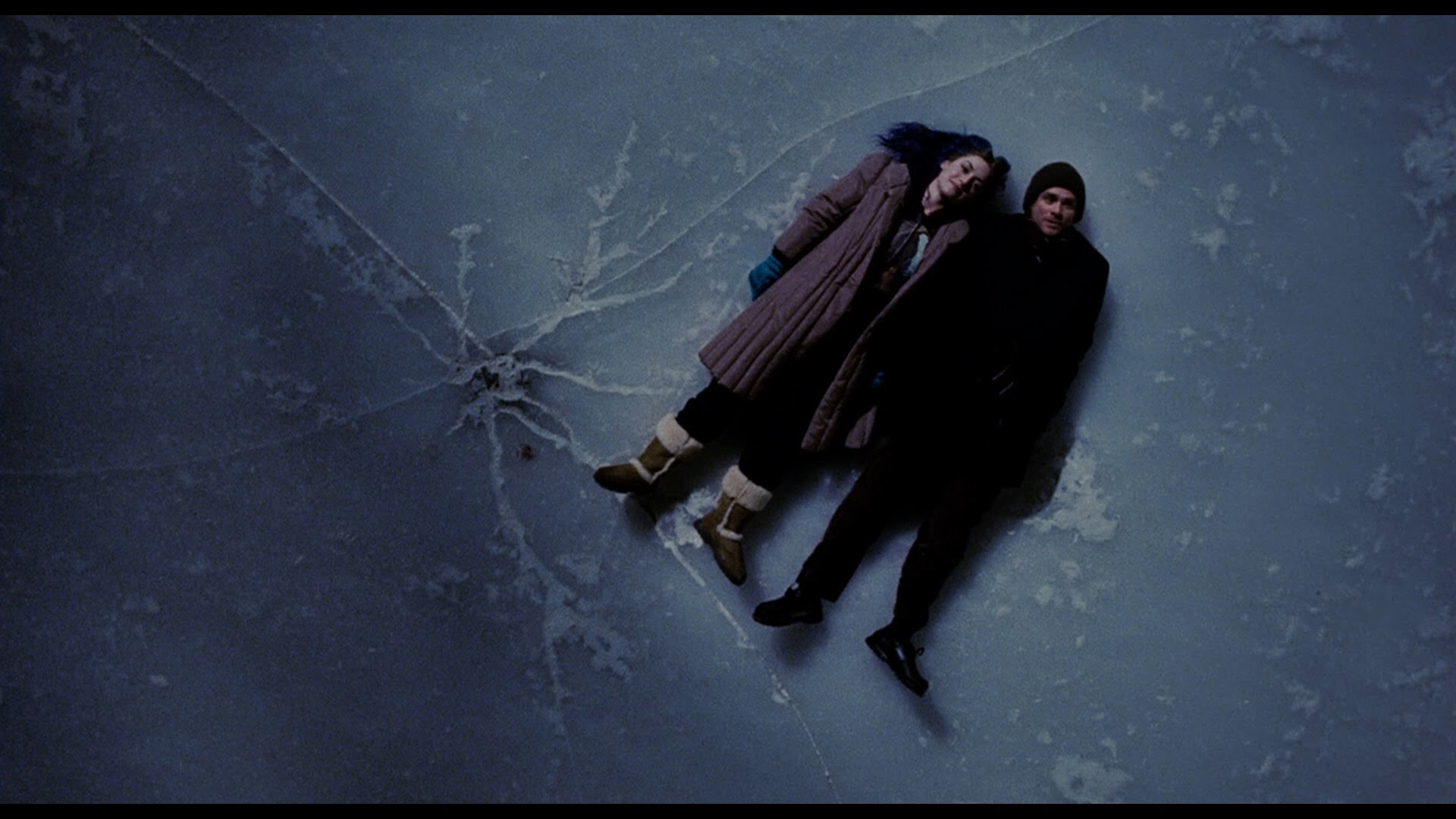 Kate Winslet apparently claimed she was good at faking waking up. Yeah, I think she captures it pretty well. No mention of something I think might be a mistake--I'm pretty sure Winslet has a battery pack/recorder--whatever you wear when you've got a body mic on--inside the back of her sweatshirt when she gets out of the car. I wonder if she has a body mic, like maybe they didn't have room for a boom mic in such close quarters.

Anyway, back to Gondry's introduction...

This simple idea instantly opened up a can of wormy ideas in my skull. We could see the process of the erasing in someone's mind. The world in his memory is being nuked by scientists, or they send virtual hitmen into his head to kill everything. He could try to find a historical book in a part of his memory, take the Roman army and fight back the erasers, only his memory of history is mediocre so the soldiers are wearing Greek costumes instead. There should be laser beams, explosions, and the physical space should represent different times of the same location, with the vertical dimension: If the hero has 158 memories of the same location, there should be 158 vertically compiled identical rooms, like a time skyscraper. Etc. (p. vii)

Meanwhile, they used smoke in the air during filming... just a little, to capture the light just right, and to get a sense of just waking up. Gondry also brings up something I was going to write about next: filming Tom Wilkinson outside the window. 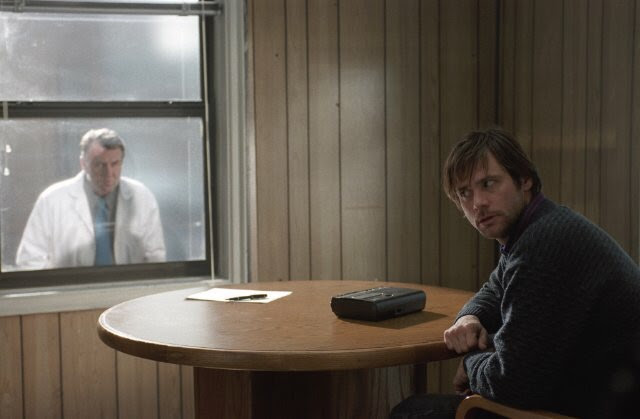 In the book, Charlie Kaufman explains:

It was Michel's idea to have them outside the window. I didn't like it because, first of all, it was one of those conceptual things things... But also because [it] look[ed] like there's some kind of plastic wrap over the window. and second of all, when Tom Wilkinson talks, you can see his breath. None of which made sense to me as a king of thing in the memory. It seemed just like someone's sitting outside a window. So, I'm glad that wasn't in the movie. (p. 158)

Gondry did the fake death thing with a girlfriend of his.

In between takes of the scenes with Carrey on the bed, Ruffalo, Dunst and Wood getting all the lines and action, Carrey would jump up on the bed and sing. Apparently, he sang the same Pecan Pie song that he sang on Saturday Night Live just last year.

Gondry commented on Mary's costume when she comes to Joel's apartment, much softer and looser than her outfit at work. It's interesting that over the course of the next few scenes with Mary she loses layers of her outfit. Down to layered tank tops when they're smoking on the bed, in one tank top and briefs when they're dancing. And later she'll be naked (but wrapped in a blanket). On the obvious level, it's just signaling the lead up to her and Stan having sex. But, under that, I think there's some extratextual signaling of relationships in general, of what they're doing to Joel, of what Joel and Clem have been doing to one another, peeling back all those Shrek onion and Altman and Taylor layers.

Like Joel's The Who's Tommy shirt in the hiking scene. Especially, combined with Clem's shirt in that same scene. She's wearing a Love is... shirt and he's got a shirt referencing not only a deaf, dumb and blind character, but specifically the short-lived stage version of said character. Love is... deaf, dumb and blind, perhaps. Also, it's staged, it's structured, it's something we manufacture. And, I don't mean it in the sense that love doesn't exist (though I also, sort of, do), but in the sense that our relationships are not self-contained, concrete things beyond us...

They shot a sex scene, or at least a making out scene (it isn't clear), between Mary and Stan, but Gondry is glad they didn't keep it in the film because he feels "weird" about sex on film. I think it also would have distracted a bit from Joel and Clem.

Neither Gondry nor Kaufman comments on Joel's mother singing "Oh My Darling, Clementine" in the bathing scene. There's room for something there. An argument about linking up the mother and the lover, something Freudian, something Oedipal. Or maybe it's just a sign that while this is a memory where Clem should not be, having her there is altering that memory itself, which is why Howard is able to locate Joel there in that memory and erase it. The song is the signal, memory outside that scene bleeding into it.

They had to fight to keep the scene with the dead bird in the movie.

Back to the bleeding thing, it is when little kid Joel and little kid Clem get into the play killing (which we will only learn afterward is something Joel and Clem did together, and which is a game Kaufman has played) that the child scene gets found by Howard. Again, bleeding too much of the "present" into the past turns it into something erasable.

This doesn't come from the commentary, but I noticed it this time. Howard's wife has just driven off. We've just learned that Mary had her memory erased. And, Howard is shot framed beside a street sign, blurred because it's in the background. It's a warning sign, warning that a stop sign is ahead. This is the moment that sets up the end of the movie and he's framed by that sign. It doesn't seem like a coincidence. Especially since Gondry uses blurred backgrounds to great effect throughout the film.