it's that time of the month

You know what else Hedwig atones for?

All of America's sordid history. Seriously, Hedwig and the Angry Inch is all about things divided, how we repair the damage, or cover it up. From the Civil War to Civil Rights, we've got a rather fucked up history full of divides and differences. And, however much we think we've got (metaphorically, of course) a good wig and makeup on, we're still split down the middle in so many ways. Hedwig tries to make up for that.

Hedwig's at 17/15 by the way, on the Christ-Figuring scale. And, the completist in me wants to finish off the list. I also want to talk about America, about history, about life, about who and what we are.

I would also love to write all about Hedwig's one liners and puns. Or the fact that Hedwig's mother's job in East Berlin was teaching sculpture to limbless children, which is immensely sad (unless they are all Buddhists or something and it's imaginary sculpture, like internal mandalas, and those kids are the most enlightened behind the Iron Curtain.

Or Hedwig's mother's line about Hitler dying for our (their) sins... There is so much in this film still worth writing about. That's how I know it's a good movie. Spend seven days with it and I want more.

I'd like to make some profound argument about identity to finish off this week with Hedwig. Someone told me today that Hedwig was her savior. It occurs to me that Phil Connors may have been mine. I've joked before about such things--with the Christ-Figuring if nothing else... also those WWPCD? bracelets.

(Note to self: I've got to get more of those made. And, in more than just that one size.)

Future, thesis-writing me--you know better than I do. This blog, having a thing to do every day, usually at the end of the day--that keeps you going. Watching movies over and over, nitpicking sometimes, celebrating others, and occasionally both at the same time--that is something worth doing. Your students accused you of overthinking things the other day in class, and so what? There is nothing wrong with overthinking things. As long as the thought process gets you somewhere. The real tragedy is when you don't think at all. Not that feeling isn't good to act on sometimes, but thinking... thinking is everything, really. Picking apart even the best film makes all movies better. Picking apart life makes life better. Groundhog Day makes life better. Hedwig and the Angry Inch makes life better. All of these moves I have watched--even *cringe* Pretty Woman--make life better. If nothing else, they teach us about ourselves, about the time and place in which it was made, the people who watched it, the world in which those people lived and live.

I was reading Edge of Awareness today. That's the book I noticed the other day in Hedwig's trailer. A line I highlighted in there occurs to me now:

To be the prisoner of one's time and place is one of our human limitations. A human being has roots, like a tree, and these roots tether him--though, unlike a tree's roots, they are emotional and intellectual roots. However, it is characteristic of our human nature that we rebel against our human limitations and try to transcend them. I myself, besides being human, happen to be a historian, and a historian's special form of human rebellion is to try to shake himself free of his own parochial blood and soil (to use Hitler's hateful but expressive words). A historian's métier is to move freely through time and space. (Toynbee, 1966, p. 81)

Since I've got a degree in history, I will concede the point, but I will add that filmmakers do the same thing. And really, we all do when we watch films as well. Instead of our time and place, we exist for a little while in the time and place of the film (for the most part; also partly in the time and place in which it was made, if's not a current film). To borrow (and potentially diminish) Muñoz' term, we disidentify with the present, with whatever is going on in the world, and we exist somewhere else for a time. And, I don't mean to promote the idea that film is pure escapism. A deliberate journey is not escape. (But, if you need escape, so be it. Escape all you need to. Whatever it takes to get by.)

Taking Muñoz more appropriately, we must understand what Hedwig represents--deliberate disidentification. For Hedwig, it's protective, but it's also so much more. As Muñoz writes, "disidentification is about cultural, material, and psychic survival. It is a response to state and global power apparatuses that employ systems of racial, sexual, and national subjugation" (p. 161). We could all use a little disidentification, a little disconnect from what the world is telling us to be. Give up our prejudices for a time, give up our hopes and our fears, sit in the dark with strangers and be somewhere else. I don't mean to coopt Muñoz' terminology. He's writing about how minorities survive in a world where other people make the rules, where history and tradition mean you might as well be nobody at all sometimes. But, if more of us could pull away from this world now and then, maybe we'd all be better off.

(Or maybe researching sixties radicals lately is getting to me. Or, maybe I just want something better for, well, all of us in this world. Something that doesn't involve subjugation.)

By the way, Hedwig gets the point for 16 innocence, for 17 cruciform pose, for 18 cross associations-- 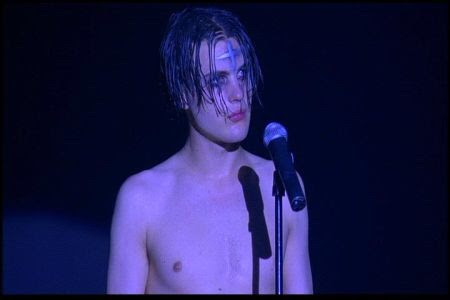 --19 miracles and signs (seriously, she flies), but not 20 simplicity. This brings her score to 20/20. Hedwig and the Angry Inch can't even afford a pizza when it comes to their tiny room, so give her the point for 21 poverty. If E.T. can get the point for 22 jesus garb (seriously, Kozlovic (2009) offers E.T. as an example), then Hedwig gets that point for his Cher costume or that rather plain dress she wears at the beginning of "Wig in a Box"... or those shorts at the end of the film--surely, that's what Jesus wore under his robes. Obviously, Hedwig gets the point for 23 blue eyes, and for 24 holy exclamations (e.g. "My God, I deserve a break today.")

Hedwig would have a perfect score but for 25 j.c. initials. I offer up two solutions:

I leave you with two final thoughts in regards to Hedwig and the Angry Inch: