one of my favorite things when i was a kid

Joel tells Clementine when they first meet--because she takes singing "Oh My Darling, Clementine" as a joke about her name--that one of his favorite things when he was a kid was his Huckleberry Hound doll. "I think your name is magical," he says.

It's a sweet moment at the end of their story and the beginning of it. A sort of cheery song about loss, and it draws a strange connection between their two meetings and his own childhood long before her--in the bathing scene, Joel as a baby, his mother sings that song. And, that moment is deleted, even though it has nothing to do with Clem. In fact, the damage already was done, I suppose. That Huckleberry Hound doll, one of his favorite things as a kid, would have indirectly been erased by the Lacuna procedure. He tells Clem when they meet (for the second time) that he doesn't know what Huckleberry Hound is. Not just his past two years with Clem but a favorite part of his childhood has been removed. 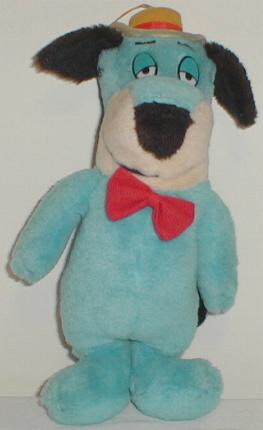 And, I wonder how he might be different in the present because of that doll's erasure.

And, I wonder how I might be different in the present if some favorite toy of mine was erased from my memory. And, I wonder what my favorite toy was. I mean, I've still got a teddy bear that was a gift when I was born, but it's not really a toy that I played with. I a cool semi-homemade Incredible Hulk doll that I did play with--it was a gift on my third birthday. I had a lot of Star Wars action figures, and if Star Wars was removed from my memory, my childhood would seem like a very different beast. How would I explain my nerdiness as a teen if not for the influence of Star Wars? Would it all seem incoherent? Would it make any sense?

Erase the right moment and maybe I don't meet my first girlfriend, or don't take an interest in her as I did. And, that means I'm not depressed after we break up. And, I don't end up saving up money to quit my job in the financial department of Jones Day because of the monotony of it. Maybe I take the extra responsibilities and stick out that job for a few more years. I definitely don't meet my second girlfriend. I don't meet my wife. I never meet my daughter Hayley and my son Kieran and my daughter Saer is never born...

For example, going back to toys. There were these military toys called G.U.T.S.-- 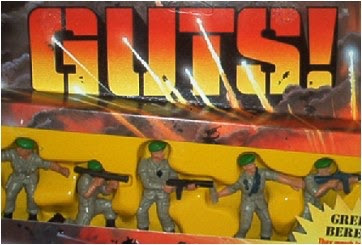 --Ok, maybe it wasn't an acronym. I remember it being an acronym, like M.U.S.C.L.E.s. (I've still got some of those in the M.U.S.C.L.E. mega-match game on the shelves with my other boardgames.) 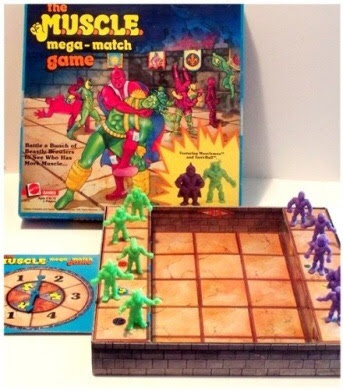 Or M.A.S.K. (And I wish I ever had as many of these as the guy who has this collection): 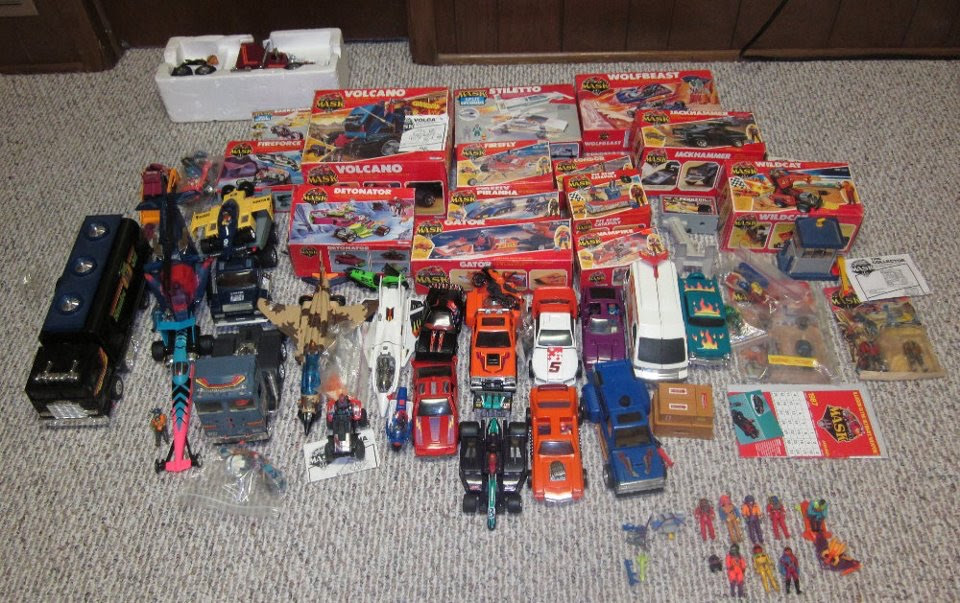 But anyway, I had two sets of these GUTS guys, an underwater set, a lot of SCUBA divers with guns in various poses, and a Green Beret set that included a dog. A German Shepherd. That dog survived longer than the other GUTS toys and eventually joined up with some G.I.Joe action figures (and a few M.A.S.K. toys, a few Star Wars figures, a couple Transformers (I never really had too many of those, but I know Grimlock and Rampage (and the GoBot Dozer) survived long enough to fight alongside all my other toys) and some Smurfs toys and numerous other toys that got all mashed up together into one shared universe because so many other toys in each genre had been lost or mangled.

My family had dogs off and on as I grew up, including several Saint Bernards. As a teen, I got my own dog. Not a Saint Bernard. Not a German Shepherd, but something similar--a Siberian Husky mix (her father was "whatever jumped the fence"). I may not have gotten that dog if not for those GUTS toys. And, one of the first things my first girlfriend and I bonded over was our pets. Her cat had recently been killed by a car and my dog had recently been put to sleep after treatment hadn't done much for a lung problem. One of the first lengthy conversations we had happened because of our pets. So, if not for those GUTS toys, maybe I never get together with Katie, never meet Miranda, never marry Sarah. Hell, I probably only got those GUTS toys because the toy section at Mervyns or Sears or JCPenney, wherever we were the day I got those, didn't have any M.U.S.C.L.E. or M.A.S.K. toys I could afford and didn't already have. So, if I didn't already have those toys, I wouldn't have seen the GUTS toys, wouldn't have that German Shepherd toy that outlived its companions, and so on.

It's no wonder that Clem feels so lost after her procedure. 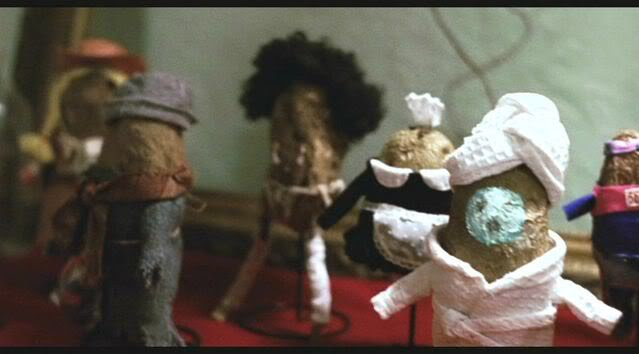 Just for a for instance, she made two of her potato people to represent her and Joel (they are two of the items he brings to Lacuna to set up his procedure). Does the rest of her potato people collection seem incomplete whenever she looks at it? Does she feel an inexplicable sense of loss when she sees them? Does she have an urge to get a mug with her picture on it to replace the one left behind at Joel's?

Her trips to the frozen Charles River survive beyond going there with Joel. But, clearly, something feels wrong about it when she's there with Patrick, even before he quotes Joel. 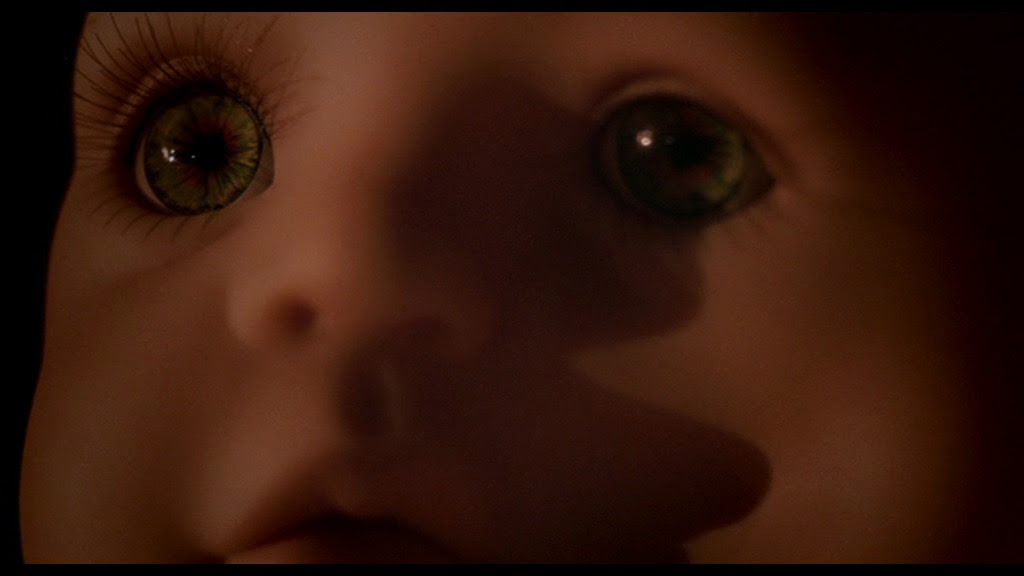 Consider: both Joel and Clem make specific reference to dolls from their respective childhoods. Joel had his Huckleberry Hound doll. Clem had that ugly doll that she named after herself. His doll sings of Clementine (well, maybe not literally; we have no reason to assume the doll sang, but the character did), of losing Clementine, in fact. Her doll is Clementine. Well, a twisted imaginary version of her 8-year-old self. In a film where the normal flow of time is not as important as the way memories fit together, it's almost as if child Joel was prescient about meeting and losing Clementine one day off in his future. Or really, the names don't matter. The characters don't matter. The toys don't matter. What matters is that we all have objects that mean something to us at any given time, objects that help formulate our selves. And, we have people who come into our lives that help do the same. You as a child is not you as an adult. Cells have been replaced, experiences have been added, memories have been lost. Your perspective on life has changed. And maybe removing a memory that is strong enough to have stuck around is as jarring as removing a limb. It's a piece of you. A piece of who you are. 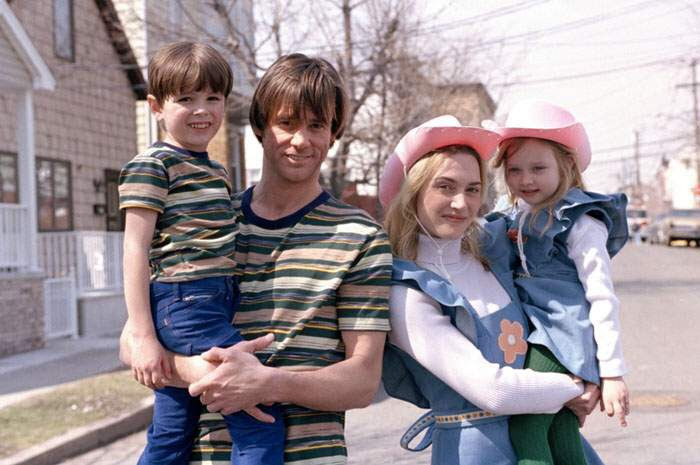 I am not the person I was yesterday anymore than I am the boy I was at 3 or 10 or 14 or 19 or 25 or 32. That old David Bowie lyric is close; it's not that time may change me. Time will change me. Time does change me. It changes you. It changes everything. We become someone new. Not entirely new, of course, but different from before.

And, it occurs to me that I have not established the theme for this month of movies--anyone new to this blog, you should know that phase 2 generally involves four movies tied together by a theme (romantic comedies, for example; '80s action movies for another). The theme usually comes out strongly from the start, but I think it's important that this theme emerges slowly, just in real life. And, I'm not even sure I want to say what it is. Not explicitly. But, maybe the me who I am tomorrow will want to be more clear.

(It's Day 7 with Eternal Sunshine of the Spotless Mind and I wish I had more days. I haven't even gotten to reference most of the sources I've bookmarked online, including philosophy professor Christopher Grau's book about the movie. This is the kind of movie I could spend an entire year on, like I did with Groundhog Day.)

I still have toys. Mostly LEGO, a lot of LEGO blocks. A closetful. (As a kid, my LEGO collection filled a single box.) This year, with teaching added to grad school and coaching and parenting and blogging, and whatever else my life involves, I've had little time to build. When summer break comes, I look forward to building again.

We all need toys. We all need sacred objects, things that matter to who we are. Maybe need is too strong, but having something physical to latch onto, like a totem, to mark who and what we are at any given time--I think that's useful. Meaningful.

Lacuna uses objects and your response to them to map your memories. That makes perfect sense to me. The things we carry, the things we latch onto, the things we keep--those all mean something. They tell a story of who we were, who we are, who we will be.