watch one of these again

When Toy Story was released in theaters, November 24, 1995, I worked at a movie theater--the United Artists Marketplace in Old Town Pasadena... which doesn't exist anymore. I remember one of the ushers complaining about the tagline "The Toys Are Back in Town" being inappropriate for what was not sequel. I don't know how many times I've seen this movie, but I saw parts of it several times a week when it was in the theater. That happened with a lot of movies in the seven months I worked there. Also, since our theater had a deal with another theater a block away we could arrange to see movies for free at either theater. Except for the midnight premiere of Batman Forever, which I arranged somehow, we weren't supposed to use our free movie privileges to see "busy" screenings.

(And, don't even get me started on the mess that is Batman Forever, except to say that watching the beginning of that movie and the end of that movie time and time again when it was on the bigscreen demonstrated to me that the middle... 60% or so of that film was superfluous.)

Needless to say, I saw a lot of movies that year. My biggest year for movies was 1996 or 1997 (I forget which, but it was around 400 viewings on the bigscreen or the smallscreen for both of those years... If I count every viewing for this blog, the past two years would rival those, for sure), but '95 included a lot of bits and pieces of movies. If I wasn't the guy taking tickets at the door, I had a lot of downtime and so I'd wander into the back of a theater (the Marketplace had six screens) and watch a few minutes. I got very familiar with the ending of a lot of movies, if nothing else.

(A quick aside, because I only just noticed this detail and it would never be worth writing an entire entry about: the knob on Sid's dad's TV has fallen off. There's a wrench on there, its handles taped so it won't loosen and fall off. It's a detail that is entirely irrelevant to the rest of the film but makes for a nice little real detail for those who notice it... 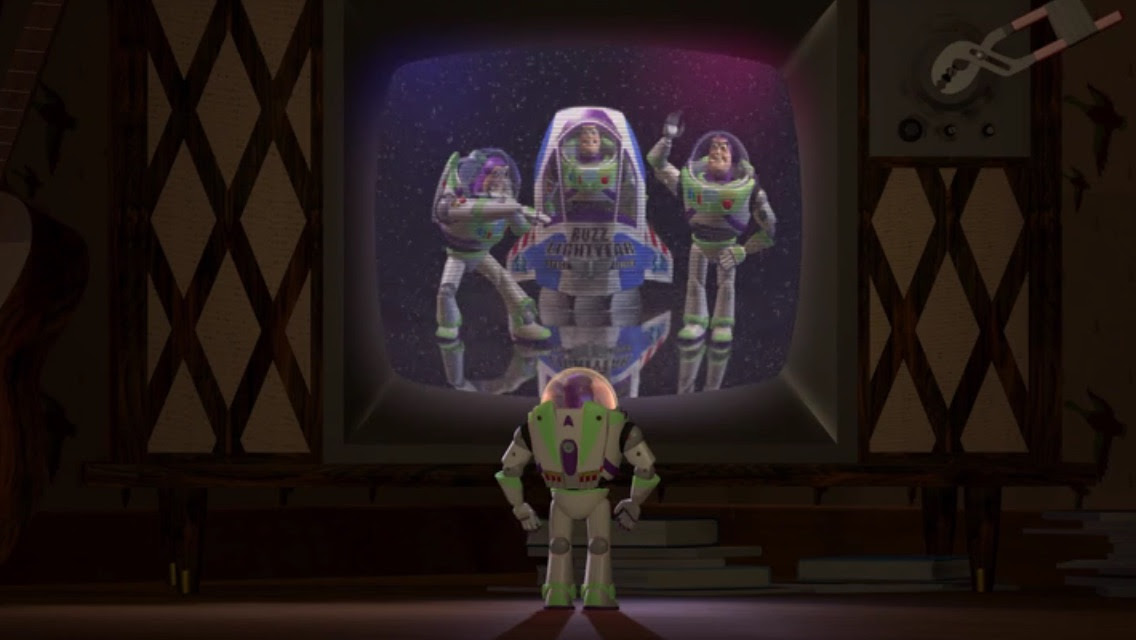 See. Another detail I just noticed is that Sid's work table is actually a door (sans doorknob) lying on top of a sawhorse and some plastic crates. Pixar always has such awesome detail.)

Of course, you can assume, since I write this blog and am willing to watch movies every day that seeing a lot of movies is, like, my thing. It occurs to me--because I was just thinking about other Pixar movies and the first movie that my then future wife and I would see together in the theater was Monster's, Inc.--that I never saw a movie with my first girlfriend. That's probably why we could never work out as a couple. Seriously though, next girlfriend wasn't much better. We saw only three movies together in the theater--Unbreakable and Valentine and The Mummy Returns. I only just remembered that we saw that last one together... I should have remembered it because she had a crush on The Rock and he's in that movie. Prior to us being together, my wife didn't see a lot of movies but I changed that. So, we lasted longer. It makes perfect sense. I just gotta find someone who wants to see as many movies as I do and we'll last forever.

But, anyway... back to 1995. I saw the end of Toy Story many times, this whole RC sequence that's playing right now. It bugged me then--and still does--that the moving truck has almost nothing in it. Hell, moving day and there were still posters on Andy's wall. It actually runs counter to the parenthetical above about Pixar putting so much detail into its films; at least one person at Pixar had to have actually moved before and should have know the truck should have been packed full of furniture and boxes. I had only moved once by then, and we didn't even use a moving truck, and I knew that.

Pixar's animation would get even more detailed over the next two decades, but at the time Toy Story was amazing to watch. Animated films would never be the same.