give it another go-round 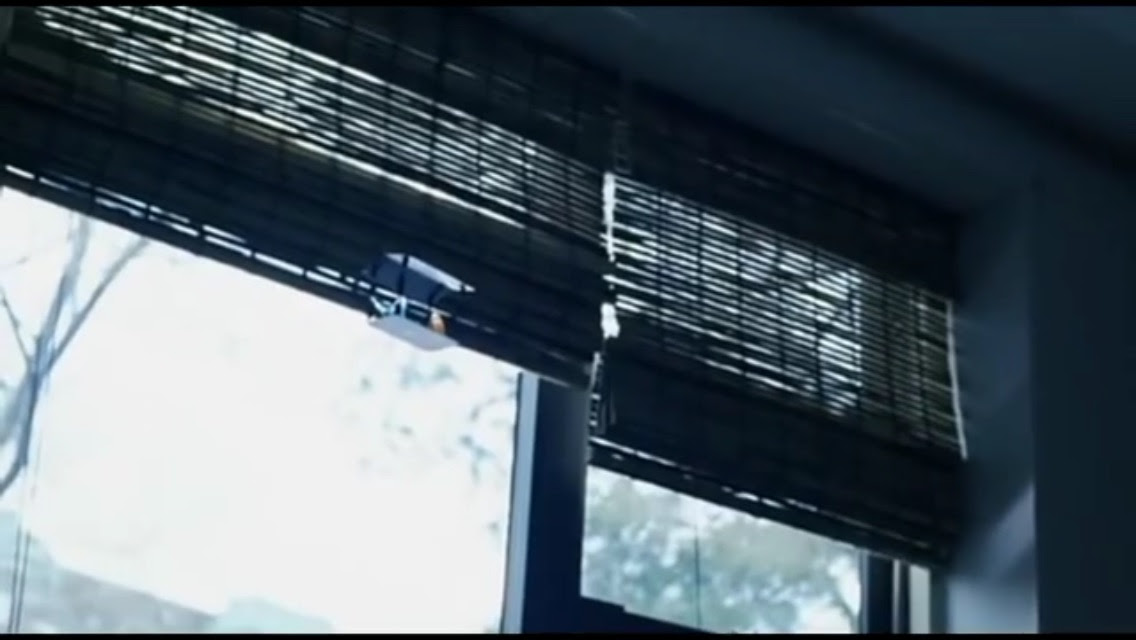 (A blue bird and an orange bird. Joel wears blue pajamas. Clem has her orange jacket (and orange hair, though when they first meet (for the second time) she had blue hair... a symbolic remnant of Joel on her head, perhaps. To be fair, Joel also wears a lot of green in the movie, not just blue (and certainly not just those pajamas). Between her coat and her hair, Clem wears a whole lot of orange.)

Structurally, I'm starting to wonder about the three-act structure we usually attribute to movies. Kristin Thompson, in her book Storytelling in the New Hollywood: Understanding Classical Narrative Technique (which I have not actually looked at directly, except for a few bits in Google Books), suggests a four-act structure--setup, complicating action, development, climax and epilogue (those last two are together). These four acts are roughly equal in length. Go back to Syd Field, or most any film out of Hollywood, and the three-act structure is fairly basic--setup, confrontation, resolution.

(Did Clem dye her hair blue before or after she had Joel erased?)

Phil Dyer, who I've used before in this blog more than once, breaks down the three-act structure a little more, and he might actually provide us evidence that supports Thompson's four-act structure. (The Script Lab's eight sequences also seems readymade for the four-act structure.) The first act, Dyer breaks down as follows: The setup lasts the first 10% of the film. Here that would be about 10-11 minutes. This is all Joel heading to Montauk, Joel meeting Clem (again)... definitely setup. The small catalyst comes at 10% in. Here, that's Joel in Clem's apartment; keep in mind that these things are approximate, so it could be Clem inviting him in, which would fit with Dyer's contention that the small catalyst "should happen to the protagonist, and not be an action that the protagonist takes." The large catalyst comes at 17% of the way (or the 17-minute mark). Nathan Marshall calls this the inciting incident. Technically, 17% would be about 18 1/2 minutes in here, but I think the large catalyst here is more likely when Joel sees the Lacuna card. The timing's a little off. Plot point one should be about 25% of the way in (or here 27 minutes). It is about 27 minutes in that Joel barges into Lacuna demanding the procedure. As The Script Lab puts it, Joel is locked in. At about 37.5% of the way (here 40.5 minutes) comes pinch one, an event that "complicates the protagonist's pursuit of his external goal. This event often reveals new information to the protagonist that will cause him to go in a new direction. This is about where Joel can first hear Stan and Patrick in his apartment. Though he has already told Clem previously that he's erasing her (right after the car falls from the sky), this may be the moment he really realizes what's going on.

(Enough about color. The reason I'm writing about structure when I haven't in a while is that Eternal Sunshine of the Spotless Mind is all about structure. From the forward plot driven by scenes set further and further into the past, to the juxtaposition of the reverse relationship of Joel and Clem next to the night with Stan and Mary countered with the past affair between Howard and Mary, to the framing sequences on either side of the single night that covers two years worth of memories (plus those childhood bits), this movie plays with the flow of time.)

Dyer's next thing is the mid-point, the "point of no return." Suggesting there are only three acts, except act two is twice as long as the other two and divided into two equal parts, it seems like Dyer is already giving us a four-act structure. For Eternal Sunshine of the Spotless Mind, the midpoint would be around 54 minutes.

(Meanwhile, nice cut in the movie from Mary asking if they can wake Joel up to Clem waking Joel up in a memory.)

"I could die right now, Clem. I'm just happy. I've never felt that before. I'm just exactly where I wanna be." Joel says that and then Clem is pulled away from him. And, the midpoint follows--he's decided that he wants to call off the procedure. Dyer says the culmination leading into the midpoint should parallel the resolution. If the hero dies in the end, this should be a lowpoint, if the hero wins, this should be a triumphant moment. This is a still moment, Joel realizing (in the present) that he was once happy with Clementine. He wants to call off the procedure. The resolution later of course is Joel decided to call off them being apart altogether.

Dyer tells us that second act sag can set in after the midpoint if the film doesn't have a strong subplot. We've got Patrick and Clementine plus Mary and Howard (and Stan), two subplots driving us in different directions; Clem is moving away from Patrick, though she doesn't quite know why, while Mary is moving toward Howard, though she doesn't quite know why (or at least doesn't realize that her feelings aren't new). Meanwhile, the main plot has Joel moving away from the procedure and toward Clementine.

(An awesome drawing on Joel's childhood refrigerator... not to suggest that he owns that refrigerator, but anyway... 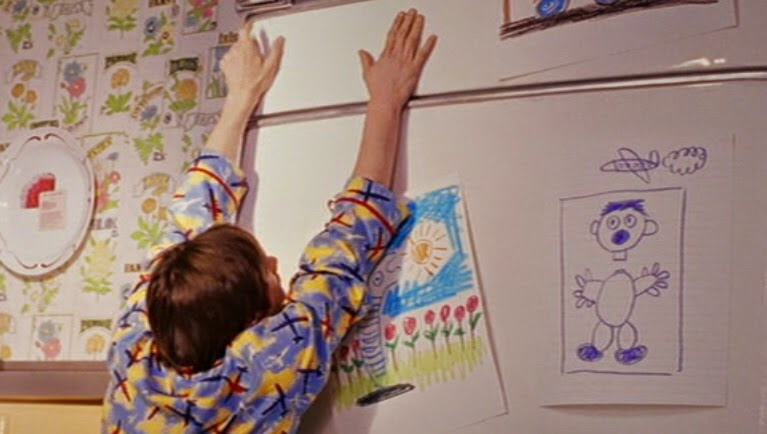 His head is floating away. Like Joel getting a little caught up in his four-year-old self.)

Pinch two should come around 62.5% of the way (here, 67.5 minutes in). This event, like the previous pinch, should offer new information and push the protagonist in a new direction. This is about when Howard arrives at Joel's apartment. Plot point two should come about 75% of the way (81 minutes). This is almost exactly where Clem tells Joel to hide him in his humiliation and Howard has to stay to help out with the procedure when he was about to head back home. These two events drive the rest of the film, so this timing is great. Also, The Script Lab says that in the culmination to this plot point, we should "get our first inklings of the new tension that will carry us through the third act." Mary, of course, has just told Howard how watching him find Joel in his memories and erase him was beautiful to watch, like surgery or art. Mary's past affair with and current attraction to Howard does drive the present story and Howard erasing that memory drives Joel's increased effort to resist the procedure. The Script Lab's sequence seven involves new tension. This would come from Howard and Mary (and Howard's wife) and, in the memories, Joel and Clem at Ruth and David Laskin's house.

Sequence eight brings us back to the present.

The interesting thing is that neither the three-act nor the three-act structure give us a clean break that coincides with the end of the procedure. Structurally, this twists Mary's story in with Joel's. So, the resolution is not just Joel's, not even strictly Joel's and Clem's. It is also Mary's. If they had kept in shots (from one draft of the script) of other people receiving their letters and tapes, then the resolution would belong to all of these people as well. Joel's and Clem's story gets writ large, becomes universal.