the dolls must really go for you

Clearly, Toy Story is built around the whole "buddy picture" sort of structure, but that's close enough to the romance genre, specifically romantic comedy, that I figured it's time to share this: 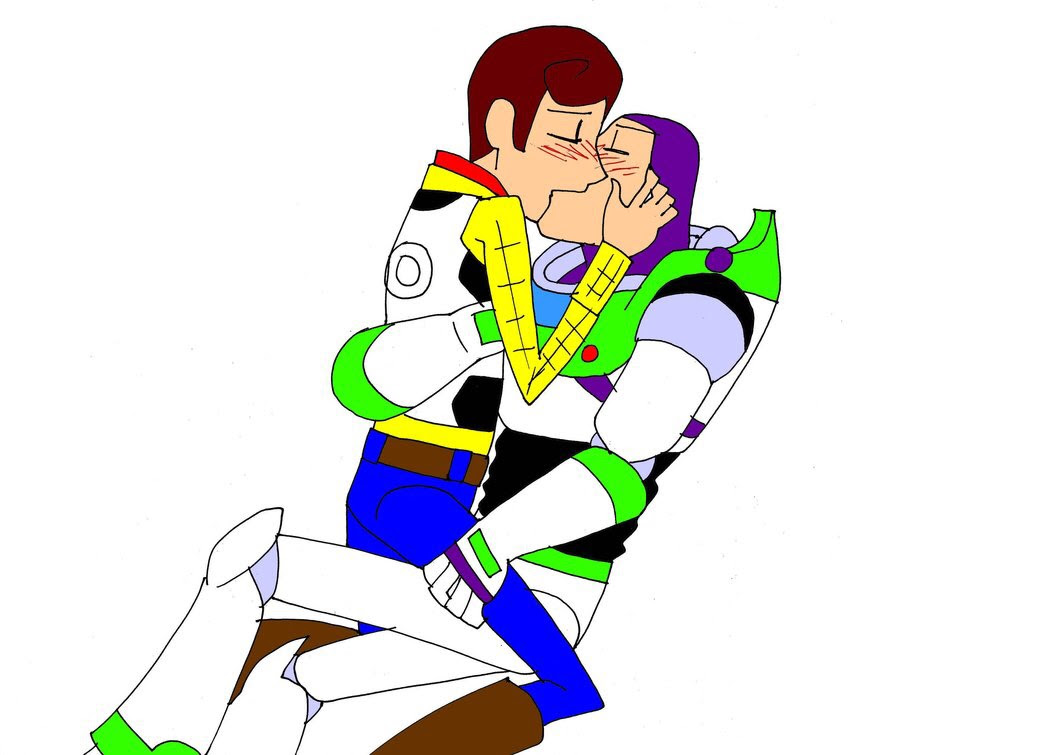 For the record, I did not draw that. It was drawn by a deviantart user who seems to be named May Pong, lives in Brunei. And, if seeing Buzz and Woody kissing like that bothers you, you really shouldn't read the rather brilliantly titled "And Beyond" by Kass, a fanfic in which Woody realizes he has fallen in love with Buzz and Buzz overhears him breaking up with Bo Peep and one thing leads to another until eventually, Buzz plays with Woody's pull string and Woody pushes Buzz's buttons.

Seriously though, I think there's more to it than some playful imagining or adolescent fantasy. (And, I'm not suggesting that Toy Story is feeding into homosexual references like, say, Planes, Trains & Automobiles, even though Woody is clearly jealous because he used to sleep with Andy and now Buzz gets to. And, let us not think about the strap on Buzz has when he and Woody finally learn to work together.) Just like the buddy genre is like the romantic comedy, there's a universality to a story about two characters meeting in conflict and learning to work together. I'm reminded of Dowd & Pallotta (2000), who write:

With the coming of the industrial age, the potential for the romantic drama increased. Social horizons expanded as transportation facilities reached into sectors where ordinary workers and their families lived. The middle class emerged as a dominant social category; its structural position between the wealthy and the workers enables its members to interact on a regular basis with diverse others. (p. 559)

We can take a few points from this. First of all, in terms of romantic drama (and comedy), it makes sense that such stories are often driven by social differences, even differences in social class. A) that fits with our notions that opposites attract and B) it turns all romantic stories into, on some level, stories about social class. Second of all, we can apply this to Toy Story, specifically. Woody is not upper class, but he does enjoy a certain comparable status as Sheriff. Buzz is also not upper class, but more a working class schmo. There will be conflict, even if they don't effectively fill the same role for Andy or the other toys, because they are inherently different. Yet, there are similarities that should draw them together as well; they are both men of the law... I assume. I'm not exactly sure what Star Command does from the little bit of information we're given in this film.

That doesn't mean romance, but the affect is the same. Their differences, and their competition drives the plot... except inasmuch as Buzz's delusion drives him away from where he's supposed to be. But, structurally, this extends the animosity that might separate a couple in many a romantic comedy (and generally separates the buddies in a buddy picture through at least the first act)--Hinnant (2006) describes a storyline that should be "familiar to readers [or viewers] of contemporary popular fiction," a storyline which "presupposes an atmosphere of bitter animosity. It involves the initial antagonism of an improbable pair of lovers who will only slowly come to appreciate..." well, one another (p. 297). Hinnant refers to the characters appreciating moral characteristics in one another, because he's specifically writing about courtship novels. In modern romance, especially romantic comedies, it's far simpler.

Let us ignore Henderson's (1978) idea that "romantic comedy is about fucking and its absence" (p. 22). When I start looking at the film as veiled homosexual love story, it feels a bit juvenile, reading double entendres into things, like Woody's lament that because he doesn't have all the fancy accoutrements that Buzz has, all he can do is... [well, he plays with his pull string].