a couple of words for closure's sake

Ralph has no story arc in the Them version of The Disappearance of Eleanor Rigby. We only see him once, when Conor brings him to Spencer's house and Spencer says hello.

Ralph is, of course, the fish. In Them, he's just luggage with a name, a random bit of trivia. Spencer knows his name and maybe we find that odd, maybe it's just a passing confusions that doesn't seem important. But, Ralph has a life. Ralph has a purpose. And, damn it, Ralph serves a specific sort of role in this film... the Him version of the story. 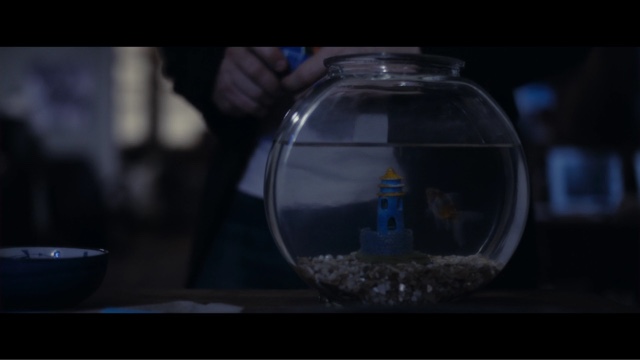 We first see Ralph when Conor goes for "a stroll" ostensibly to go home and check on Eleanor who is still in bed at 6:30pm. Conor feeds the fish before he crawls into bed with Eleanor. Ralph, then, is the first thought. A stand in for the dead child. Eleanor comes second. Ralph is Conor's preoccupation with his dead son. Ralph is responsibility aborted, responsibility perverted. Ralph is something that should be easy to take care of. Eleanor is not. She sleeps all day, she doesn't go outside, she doesn't eat, and pretty soon, she's going to jump off a bridge.

We see Ralph for the second time in Him, the only time in Them (and I'm wondering if we'll even see Ralph at all in Her), when Conor abandons the apartment that Eleanor has already refused, when Conor goes to Spencer's apartment to stay instead. Spencer, inexplicably for the moment

(Seriously, in that moment in Them, I thought it was odd that Spencer even knew the fish's name. It has been implied that Spencer and Conor don't talk much, and it's later suggested that they haven't really spoken since Cody died. But, Him offers us a more specific timeline. It's been a year (-ish) since Cody died. Conor and Spencer do talk, but they don't get along. Spencer might actually be losing his mind, though in Them there is no real evidence for this. But, he knows the name of that fish. It seems either oddly random or entirely important, but in Them it's sort of neither. It's just a passing familiarity that doesn't matter a moment later when that fish is never seen again.)

We see Ralph again when Conor comes "home" to find Spencer in his room. Ralph is dead. Spencer, it turns out, bought Ralph for Cody, a mere baby at the time. But, Ralph, like Cody, is now dead. Why? Is it because Conor is a bad father? A bad caretaker? I mean, transporting that fishbowl from one apartment to another like that can't be good for a fish. Nor, given the complexity of larger fish tanks, can that antiquated fishbowl be a good idea for any fish. But, the literalness isn't the point. Conor was not able to protect Conor from (presumably) dying in his crib anymore than he can protect Ralph from dying in his fishbowl. You can feed a fish all you like but eventually, it will die. You can hope for a bit better odds with a human child, but still, how many die? A Washington Post article back in 2013, found that 2300 babies die from SIDS every year in the United States. That isn't much out of the nearly 4 million babies born in 2014, according to an Los Angeles Times article. But, for those 4600 (or so) parents, it's everything.

Lose your child, lose your world.

Yet, Conor carries that fishbowl like it's just another piece of luggage.

This reduces--dare I say it--that claim of ownership, belonging, love, that one places on a child, that Conor places on Cody. Cody might as well be that fish, except that Cody's absence leaves a larger hole in Conor's life. And a far larger hole in Eleanor's.

Does she think of that fish? In those moments when she cannot preoccupy herself enough to forget that Cody ever lived, does she remember his fish and wonder about its fate?

Ralph is "buried" at sea (or I guess it's the Hudson River, off the end of Pier 46) after Spencer waxes a bit about mortality. Ralph isn't seen here. He's in a box. But, similarly, Cody is never seen in Him. And barely seen in Them (and Her). His death is something in the past, an event with which we cannot be familiar, but an event that dictates everything we see.