it's not perfect but it's real

I find I can't--or don't want to--write about the third act of Before Midnight. But, who needs to get that far into everything anyway? Instead, I could talk about punctum, or a series of puncta. If you're new, or you've forgotten, a punctum, by way of Barthes, is the piercing, wounding moment that pulls you in, that forces you to identify with a character perhaps, that puts you fully into the story, the small detail that makes it all real for you in the moment. I can avoid the greater wound by dealing with the lesser.

(As Jesse is left behind, Hank gone, music starts up and it feels intrusive. I'm sure there was background music in Before Sunrise and Before Sunset but I really don't remember it. If it was there, it wasn't intrusive. Here, and a few instances later in this film, the music is a bit too noticeable, making this film feel more like a movie than whatever the previous two films were.)

The first punctum, I suppose, is in the car. The girls are asleep in the backseat so Jesse decides not to stop at some ruins the girls wanted to see. Celine acts like that is a bad choice, but then when the girls wake up and one asks about the ruins, Celine immediately backs up Jesse. "Oh, they were closed," she says. Co-parenting conspiracy. In that moment, there is the first real sense of Celine and Jesse as a couple as parents. The opening scene offers Jesse as father, but with the girls asleep, the conversation in the car is mostly talk or still focused on Jesse as father (though Celine talking on the phone with Hank, or talking about private conversations with Hank, especially talking about him kissing some local girl which was something she was sworn to secrecy on, is pretty good, too.

(Jesse claims that his third book--the pretentiously titled Temporary Cast Members of a Long Running But Little Seen Production of a Play Called Fleeting--took longer to write than the first two put together. While this could just be hyperbole, it is worth pointing out that it cannot be literally true, unless the second book was written superfast. It took Jesse 4-5 years to write This Time. He cannot have written That Time until after the events of Before Sunset, and it has been nine years since then. Barring a time loop, he had nine years to write two more books... (assuming the lower end of Jesse's estimate as to how long This Time took to write--four years) the only way this is possible is if That Time took two years or less to write. Leaving seven to eight years to write the third if it has only just been published, but since the old guy has read it, that seems unlikely.

This is actually a weird nitpick from me since I wrote my first (badly written) novel in only a month, my second (slightly better written) in three months, and unless I finally finish the novel I left unfinished in 1999, three months is probably the longest any of my novels took to write. To be fair, I am not prone to writing drafts. Which should be obvious if you read this blog at all regularly; I don't really rewrite. (That's actually one of the weirder things about my master's thesis, something that is making it take longer than I expected it would take--I wrote a couple drafts of the opening chapter and just today put together a remix of the literature review sections that I had been keeping separate.)

But, Jesse took four years to write (and rewrite) that one night in Vienna into a book. Is it really likely that he took only a year or two to write that hour and a half (plus days of sex) into the second book?)

Another punctum: Celine is talking about when they played pinball in Vienna, how she lost on purpose to let him win and as she is talking, Jesse is talking under her, "The foundational lie to our relationship," and you get the sense this exact exchange has happened at some other dinner party with some other crowd of friends. They're talking past each other, but you just know that they are both very much hearing each other's words as well. A couple minutes later, it happens again when Celine announces that he wants her to move to Chicago and he says, as she is still talking, "That's not what I said. I missed him." And, this is entirely scripted and rehearsed. They are not improvising. This dialogue is not just happening. It was planned this way, designed this way.

I'm reminded of the devices I used when writing for nearly a week (836 837 838 839 840 841) about Ex Machina: LEVEL 1 was the programming of character on character, LEVEL 2 the programming of filmmaker on character, LEVEL 3 the programming of society on filmmaker. Linklater and Hawke and Delpy, taking all these LEVEL 3 ideas about what men and women should be like, what mothers and fathers should be like, "husbands" and "wives" (Jesse and Celine have never actually married) should be like, and they infused (LEVEL 2) their script with those ideas, manipulating Celine and Jesse to turn what was once this great romance into something a little too close to real life for comfort, so that Celine and Jesse play off one another (LEVEL 1) both cutely, romantically and antagonistically. At that last level, you have Celine expecting certain behaviour from Jesse, Jesse expecting certain behaviour from Celine, and it is not just about those characters.

(And, that was a weirdly long sentence. That is not like me at all.)

Another punctum: Celine has just said she's losing her hair, Jesse calls her "baldy" jokingly and Celine looks confused by the reference. Not offended. Confused.

The next punctum comes after the top of Celine's dress is down. First they're kissing a bit, then they're on the bed, but then the phone rings and the conversation continues and she still hasn't pulled up her dress. There is something more intimate about that than if there was a sex scene. It's casual, it's intimate, and it's real. In an interview with Vanity Fair, Delpy says, "I think it is hard to argue with a woman who is naked and exposed but also totally comfortable starting a fight with her breasts out." in GQ, she says:

I wanted it to be realistic! Sometimes I see films where people have sex with a bra on. I mean what country do they come from? I don't think I've ever had sex with a bra on in my life, except maybe once. It's not the most comfortable thing to be acting topless. I've never actually showed my body that much, even though I'm a French actress. It was a big deal for me to do it. This movie isn't fantasy. This is a film for people who can handle a pair of tits.

In a script idea I had for a very self-referential, meta- story, one of the visual jokes was going to be that the couple who had a sex scene actually had L-shaped sheets on the bed, so that right after they had sex, the female could be covered and the male uncovered. Because, that is what real people do after sex, immediately cover up... Well, they might do that if they are horribly ashamed by the sex they have just had. But, in movies, yeah, Delpy's right. Sex is unrealistic because it has to look a certain way, or not look a certain way. Body parts are hidden in order to make things less awkward or avoid a different rating from the MPAA. In this regard, I rather appreciate that scene at the beginning of Forgetting Sarah Marshall when Sarah (Kristen Bell) is breaking up with Peter (Jason Segel) and he's naked and he refuses to get dressed because who the fuck wants to think about putting clothes on when you've just been devastated like that? The movie plays it for awkward laughs but I think it's actually pretty damn realistic.

So, Celine doesn't pull her dress back up until she separates from Jesse and goes to the other side of the room. Jesse doesn't pull his pants back on until he gets up from the bed. Meanwhile, the conversation continues. That's real. 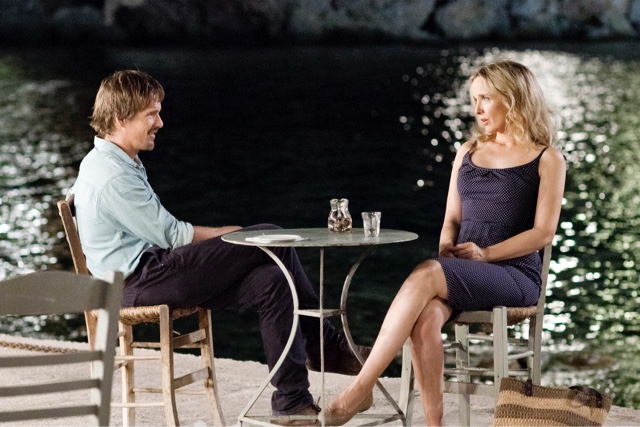 One more punctum before I go: when Celine walks out the first time, Jesse tells her, "You forgot your shoes," and his tone is not like he's being a smartass. He has legitimately noticed that she's leaving without shoes on. If she had left in any other mood than anger, he still would have said the same. That's real, too.