I realize tonight--seeing that opening dine-and-dash bit for the eighth time--that the opening scene sets up the dichotomy between Eleanor and Conor pretty well. I'm back to The Disappearance of Eleanor Rigby: Them tonight. And, if you know the film, or have been reading this past week's entries, this should make sense... First, a rundown:

Opening line, from Conor: "Would you still love me if I couldn't pay for dinner?"

Eleanor hesitates, Conor's seriousness taking a moment to sink in. Then, she answers, unsure, "Possibly."

Conor laughs. Eleanor realizes for sure he's not kidding. She laughs, too.

Conor suggests, "We could have a big row. And throw some shit. They might kick us out."

Eleanor dismisses that option. "Uh, been done, and it would draw too much attention." She's already doing something with her feet. Conor notices, makes a face.

Conor asks, "What are you doing?"

"I'm taking my shoes off," Eleanor explains. "I'm going to leave first." She looks (presumably) toward the exit. "And then," she says, "when the time is right, like when the maitre'd's not, um, looking..." She turns toward Conor and leans in close. "You meet me down the street." She kisses him and she leaves.

He laughs again. He's smitten. He's confused. I don't think he thinks he can do this. But, he looks around the restaurant, sees no one is paying attention, laughs, then gets up and slowly walks toward the exit.

Conor can't help but smile at a waiter, and that waiter notices he's leaving. "Uh, excuse me, sir," the waiter says. Conor hesitates, looks at the waiter, one finger up, like oh, that, like he just forgot to pay.

Cut to: outside, Eleanor's walking and out comes Conor from their restaurant, running. "Run," he cries. Eleanor looks back, then runs.

They run and run and eventually get to the park, Conor trips and Eleanor sits down on him and it's all rom-com, happy and cute. Then the fireflies show up, and in Them the scene is done. (We see more after the fireflies in Her.)

So, think about it structural terms. Bad news arrives. Eleanor's impulse is to cut and run. Conor isn't so sure. In fact, when the waiter catches him, you almost expect him to go ahead and pay. Backtrack to the beginning, though, and you get a better sense of Conor. I mean, we don't really have reasons to think he believes Eleanor's love hinges on whether he can pay the bill, but maybe he does. Maybe it does. Maybe their relationship was always right on the edge of ending, even before they had Cody, even before Cody died. Eleanor ran off to France before. Well, went there for school anyway. I assume; I mean, it would be hard to do an ethnography on performance artists there if you didn't go there. So, Eleanor was never the most anchored of people. Ooh, but that's not information from this scene. I'm talking just about the opening scene.

Who is Eleanor in this scene. She's quick to run away, from paying the bill, from Conor. If the standard wasn't that the guy pays the bill on a date, we wouldn't even have to assume this is a date. Until that moment when Eleanor leans in and kisses Conor, they could be just friends. He's wary, she's aloof. When she has a plan, he goes along with it because, clearly, he's in love.

This is just the opening scene. 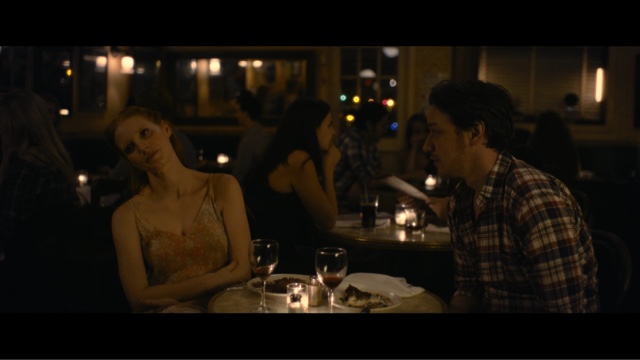 Opening scene in a movie that wasn't supposed to exist. Well, this is the opening scene to Him, of course. But, Them wasn't supposed to exist. It's a product of an industry that has trouble booking two movies at a time. Seriously, they even had trouble getting Him and Her into festivals right when they were trying to get a distributor. However much these two films are separate things, it's questionable whether they can actually stand alone. They mostly can, but they work better together.

By the way, consider the scene after Conor invades the classroom. Compare backward to the opening. Conor gets hit by a car after Eleanor runs away again. In the opening, Conor tripped. Conor keeps getting hurt but he keeps on trying. Eleanor ignores the hurt and heads in a different direction. This is their characters throughout the film... Until the ending.

Then, Eleanor comes back.

Can Conor trust her return?

I mean, what's to stop her from running away again and again whenever things are difficult?

I'm not sure the "happy" ending works. It's what we want when we watch the film, and we latch onto it eagerly. But, if you really think about the relationship at the center of the film, it's unlikely that round two is going to go well. The opening line questions whether or not the relationship will last, puts it in a very fragile position. The ending (in Him and Them, anyway) doesn't even offer closure. Sure, Conor has a better restaurant than before, he's replaced his father. And, Eleanor has gone to France again, maybe finished her degree. But, who was Conor's father but a man who stuck with a restaurant long after he was tired of it, who had three failed marriages and numerous other failed relationships along the way? And, while Eleanor's parents might still dance sometimes, we never see Conor and Eleanor dance together except in the past... Or maybe Conor is just like Eleanor's father, not willing to run away just because things are difficult, and Eleanor is just like her mother, wanting to run away until things are not so hard. Maybe they'll be okay later. Maybe not. Maybe the ending isn't happy at all, but we want it to be. Even if it doesn't make sense.