Scroll down past the parenthetical if you want to get to the movie.

(Author's note: I have not committed to doing this film (and its versions) for the entire month, but I have excluded my original plan for the month because I realized that the next movie (Blade Runner) I was going to spend a whole bunch of days on wasn't going to leave as much room for discussion because its versions are just alternate cuts, not deliberately separate versions of the story. The movie (Brazil) I was going to end the month with fits a little closer to this, but its variations are all about meddling after the fact, not planning. And, both films have been written about so much I don't know if I could offer much in the way of original insight...

Oh, I'd give you something. And, it would, at least at some point, be amazing. But, a lot of it would be repeating other sources' takes on the films in question, especially Blade Runner. (The most original thing I could do there is not actually all that unique. In a comparative religion class I had several years back we had an assignment: after reading Do Androids Dream of Electric Sheep (which I'd read a couple times previously), we had to write a two-part paper; part one an exploration of religion within that book, part two the creation of a religion for the people in the world of that book.

And, if you don't already understand the connection there, that Blade Runner was based on Do Androids Dream of Electric Sheep, you probably wouldn't much care what I had to say there anyway.

But, that's hardly a problem for me. Most of the time, anyway. I mean, I spent the past ten days--and tonight, as well, once I get to it below--on a (set of) movie(s) that most people have not seen and probably have not heard of. Not that I need you to know what I am talking about all the time. I mean, if I can't explain sufficiently the context as well as whatever my point is regarding a particular film, I shouldn't be writing about movies.

That being said, I'm going to keep writing about movies, at least until Phase Three is complete. That is, until I have completed this third year of blogging every day about movies. I want to try something new after that. Also, I hope to be busier teaching by then. But, I do still want to be doing something... like this, or along similar lines. And, ultimately, it doesn't matter most of the time if anyone at all is reading these things. I'm guessing most of my pageviews don't come from readers who make it through an entire entry. Auerbach's (2005) advice for bloggers indicates that a lot of shorter entries is the way to go. I have rarely managed a short entry... at least, on purpose.

(As, this parenthetical note has just passed 500 words, you can see why that is true.)

I am wordy. Even when I do not need to be.

Backtracking slightly, it doesn't matter how wordy I am or how far you readers get because this process has been and is good for me.

(Note to self: quoting that line in your thesis might be a bit a) on-the-nose and b) redundant. But, have at it.)

I'd like a larger regular readership than I have--and whatever I do after Phase Three may be a way to aim for that--but for now, I'm good with the few dozen views a new entry will get on its first day (on average) and all the views old entries get. I'm good with treating this almost like a private journal about movies. You all just get to peek at it from time to time.

One last thing before I get to the meat--pun intended--of today's entry: I do not know what movie I am going to watch tomorrow. I cannot continue the intended theme of movies that exist in versions. Stuff like director's cuts and extended versions--that's not quite the direction I hoped to go. And, I don't know if I want to keep watching The Disappearance of Eleanor Rigby all month.)

What I wanted to write about today, something that was lingering in my head as I've been watching this movie again and again (in its various incarnations) is food. The movie opens after Conor and Eleanor have just eaten at one restaurant. Conor owns a failing restaurant, Spencer has a more successful one. Right now, as I write, Stu and Conor are talking over food. Later they will have a (sort of) food fight. In Him (I'm watching Them again, tonight), Stu spots Eleanor at another restaurant and calls Conor about it. A few minutes ago, Eleanor came upon Mary making panisse. Mary is (almost) never seen without a glass of wine in her hand; in fact, the only times she might not have one is after Eleanor has taken it from her. Eleanor learns that someone extra is there for breakfast because of the "feast" she sees prepared in the kitchen. The first bit of Eleanor babysitting Phillip is him drinking milk (maybe a little too on-the-nose with the motherhood thing). On the roadtrips, in both past and present, Eleanor has a big gulp and red vines. Katy has a poster of a coffee cup in her bedroom. Eleanor's trigger, of sorts, for realizing she couldn't deal with being with Conor was him putting their sons stuff into a closet then ordering Chinese food. In Him, we even see Conor feeding Ralph (the fish). But, the thing that really got to me over the last week was Lillian. Except for the lecture that Conor invades, Lillian is either on her way to get food or drink, or eating and drinking. (Even when she comes and sits next to Eleanor in the classroom before class, she's carrying a soda.) In fact, she quite noticeably talks with her mouth full when she talks about her vegan husband and when she recounts the story about her dog Miles. And, I got to thinking--

Lillian is Eleanor's lifeline. She's the sustenance that is keeping her alive. I don't know if Ned Benson meant to wrap Lillian's scene around food and drink, or if maybe he just based her on some professor he knew who was always on the way too or from food--I share an office with several people, and inevitably, there is food going in and out of that office all day. It's not as if Lillian needing (or wanting) food and drink all day is unrealistic. You try talking for hours at a time. Or sitting around grading exams or papers or speeches. Food and drink punctuate the time. 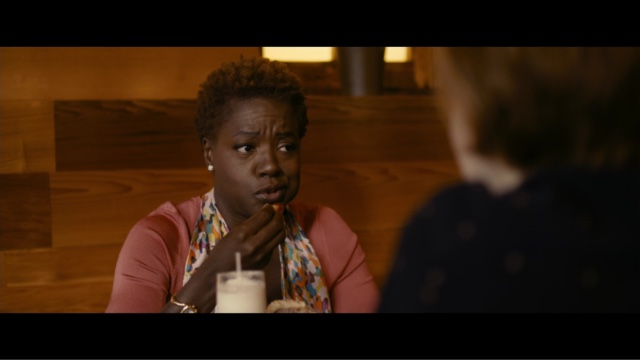 An aside: I absolutely love Lillian's look of something like a mix of disgust and horror and exasperation when Eleanor tells her that he next class is hers (before they go out for burgers). Though I love teaching, I swear that feeling is still there before every class. Not nervousness or anxiety about teaching but something like exhaustion. In the long run, that exhaustion is a positive thing because I'm out there doing my best within the confines of my particular classes, to help my students express themselves (and be organized about it). In the short run, like right when it's time to head out from my office to the classroom, there's a different sort of weight. Sometimes, there's a little disappointment rolled into it, as I'm not always optimistic about what my students are going to do that day, sometimes it's just a general tiredness because however fulfilling teaching is over time, from class to class, office hour to office hour, it's still a job. But, there is this weight that hits, and sometimes the push through it makes the day a better thing. Sometimes, it's hard...

I don't know about the rest of you--though judging by statistics, a lot of you are in a similar position--I fill the hard times with food and drink. And, a lot of that food and drink is bad for me, junk food, soda, alcohol. Last summer, after my car died, I actually managed to take off a few pounds with all the walking around town that I was doing. When school got going again in the fall, life was more sedentary and I put on more than I had managed to lose, and that gain has been going steady since. I need to do something more deliberate to lose it, but haven't gotten up the will or scheduled regularly the time to do so. In the meantime, there is food. There is drink.

There is, in some sort of reverse metaphor, Lillian. Sustenance for the mind and the body. Right now, for the record, for the mind it's The Disappearance of Eleanor Rigby: Them, and for the body it's water, though there was some half homemade pizza earlier with some Dr. Pepper. And, for the mind earlier, there was a new episode of The Walking Dead, a few old episodes of Seinfeld, and the Democratic Townhall on CNN.

And, then I found myself sitting here, listening to the movie but distracted from either the TV screen or my iPad screen by an article about Donald Trump on my phone. Sometimes, I want all the screens. Hell, even more than I've already got. Like a wall of TVs tuned to news channels like some crazy Hollywood-invented newsman or madman (if there's a difference). Or, all my favorite movies playing next to each other 24 hours a day. Just gotta turn up the volume on the one I feel like listening to.

Other times, I want no screens. On a game night, for example. Or a hike. Neither of which have I had recently. I want friends to hang out with, to swap jokes and stories and debate politics or whatever.

I realized recently, because my daughter Saer's being reading a lot lately, I wasn't sure when the last time I read a novel was. I used to read all the time. I still read a lot, but it's news articles, essays, nonfiction. The occasional comic book to make it interesting. It's finals week tomorrow. Then spring break. I think I want to read a book. I'd say "or two" but I've also gotta bingewatch the second season of Daredevil and catch up on a few other shows somewhere in there. Plus, you know, movies. The last four [edit: had to check my calendar to see that Embrace of the Serpent came in the middle of these four for me, so make it five] that I saw in the theater were awesome--10 Cloverfield Lane, Zootopia, The Witch (though, that one, I really think the ending negates a lot of what made the rest of the film great) and Deadpool. I haven't written about them here, haven't reviewed them online. On the one hand, that's a great way to enjoy a good film. Just let it sink in and change you. But, I want more people to see more movies. So, I will keep writing about other ones. After over two thousand words in this entry (and the movie's not even over yet), I've got an idea of where I might take this month's blog entries. Or maybe I'll just drift, do what I'll do.

Singing about the (mostly) unsung--that's what I really want to do, sometimes. Find the gems that critics noticed but the masses didn't, and convince you all to try something you might not have been willing to try before.

Or maybe we can just get some food and talk about movies in real life. That's fun, too.