they should have a little disclaimer

"One person is not just one person." -Father Lantom, Daredevil*

Right away, in Mrs. Doubtfire, it's pretty clear that this movie wants to tell us something. Daniel (Robin Williams) is a voice actor and he adds lines to comment the presence of smoking in the cartoon he's working on, then walks out when his producer(?) gets mad at him. It's been a long time since I've seen this film and I get the impression from Daniel's preachiness that the movie might get a bit preachy, too. If it can refrain from just sitting back and letting Robin Williams get carried away with jokes and impressions (many ad libbed).

(* Because that was most of my day, today--watching the second season of Daredevil. It's spring break and, while I hope to get another section of my thesis written before school is back, I've got to waste a little time, too.)

I think the film is going to end up favoring the comedy over the potential drama--like these deleted scenes--and when it does get dramatic, I'm guessing it's going to be a bit one-sided. Like right now, Daniel and Miranda (Sally Field) are fighting about the extravagant birthday party (with barnyard animals) he just threw for their son Chris (Matthew Lawrence), and she's shrill, he's calm, she's complaining, he's just reiterating that she's the one complaining. And then she asks for a divorce. The way the kids were excited by Daniel showing up to get them from school, I was thinking the film started with them already being divorced.

Speaking of letting Williams loose, just watch the quick cuts of his voices after his court liaison asks what it means that he "does voices." It's like the movie stalls for a moment to let him do a comedy bit. Which isn't entirely a bad thing... At least each individual time. Just like his titular nanny character--she's amusing in small doses but a little... much when the movie's running over two hours. Given the right character and the right setting--say, Parry in The Fisher King--letting Robin Williams loose can work, but in this film, the premise is basically that all of his outlandish stunts and jokes in the face of real life are the problem and he's supposed to do better.

The problem is, the film expects us to not only forgive Daniels' antics but support the ruse he puts on to violate a judge's order. What's really going on is that the only way Daniel can be a good father (and a good husband, actually) is by not being himself, by pretending to be an old British woman. In part of the deleted scenes mentioned above, the oldest daughter, Lydia (Lisa Jakub) asks him why they can't all just pretend to be a happy family and he points out that then they would just be a pretend family. But, maybe if he'd pretended to be a responsible adult earlier he would have, you know, become one. 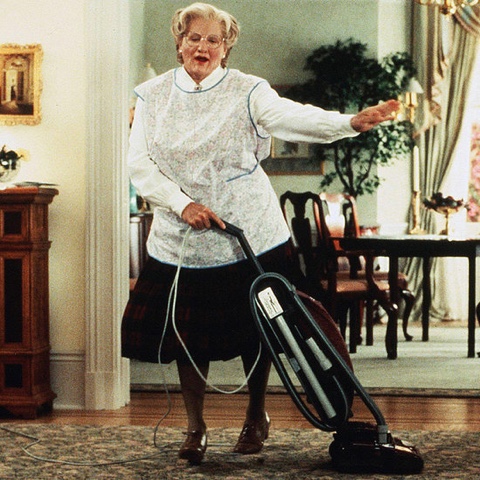 It's a sitcom plot expanded to two hours. But, make it two hours and we almost have to take it seriously. It has its moments, but it opts too often for a one liner or a visual gag.