Jesse tells his readers about an idea for a new book, one that will take place within the span of a pop song. He talks about two moments happening simultaneously, and we get one more shot of Celine from the previous film--that moment when Jesse takes her "picture." And, in the present, there is Celine at his book signing. Jesse is supposed to catch a plane in about an hour, but he goes off with Celine anyway. More walking and talking, but this more in real time than the first film.

Within minutes, Celine asks if he showed up in Vienna that December. She says she didn't because her grandmother died. Jesse says he wasn't there, but he soon admits that he was. (To be accurate, he says neither of these things, but those are his answers.) Amusingly, she asks if he met another girl and he claims that he did, an obvious lie. 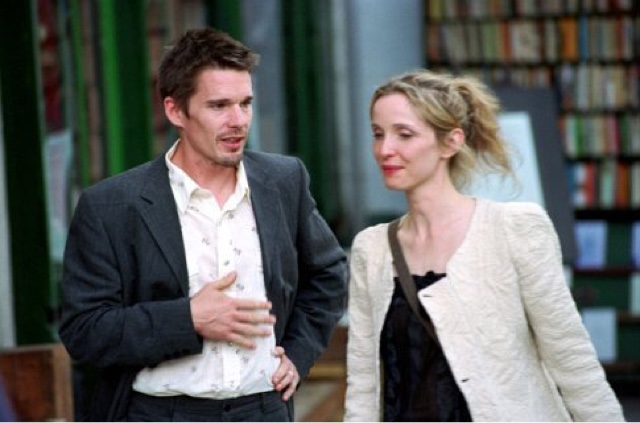 In the original film, Jesse and Celine are young, optimistic, capable of meeting and falling in love in one day. Now, they have lives. The conversation continues, but it is different. She's more political, more cynical. He's... well, his changes take a while to come out. (He got married and has a four-year-old son.) Physically, the only way he's different, according to Celine is the line between his eyes, a wrinkle of getting older, but she compares it to a scar. Which isn't that inaccurate a comparison; what are the lines of old age if not scars left by the passage of time?

Jesse spent four years writing about their day together. Celine has trouble remembering some of the details--like whether or not they had sex. Yet, she also talks specifically about how unique each person is, how much she appreciates the details... "Memory is a wonderful thing if you don't have to deal with the past," she tells Jesse at one point. Later, she tells him:

People just have an affair, or even entire relationships... They break up and they forget. They move on like that would have changed brands of cereal. I feel I was never able to forget anyone I've been with. Because each person has... their own specific qualities. You can never replace anyone. What is lost is lost. Each relationship, when it ends, really damages me. I never fully recover. That's why I'm very careful about getting involved, because it hurts to much. Even getting laid. I actually don't do that. I will miss on other person the most mundane things. Like I'm obsessed with the little things. Maybe I'm crazy, but when I was a little girl, my mom told me that I was always late to school. One day she followed me to see why. I was looking at chestnuts falling from the trees, rolling on the sidewalk, or ants crossing the road, the way a leaf casts a shadow on a tree trunk... Little things. I think it's the same with people. I see in them little details, so specific to each of them, that move me, and that I miss, and will always miss. You can never replace anyone, because everyone is made of such beautiful specific details. Like I remember the way, your beard has a bit of red in it. And how the sun was making it glow, that... That morning, right before you left. I remember that, and I missed it.

Counter that with her not remembering that she and Jesse had sex (though she admits later that is a lie), or the other story she tells him about her childhood, how she created a memory of a a man who didn't exist because her mother was paranoid about her being abducted on the way home from school. Memory is, of course, fluid. Jesse wrote and rewrote their night together into his book. How much more accurate can his version be than hers? How much more, as she suggests, is his version idealized? The reality doesn't matter as much as his memory, as much as her memory. Or as much as our own memory of the earlier film; isn't that the point to sequels much of the time? (Leaving aside the cynical notion of sequels being made to make money, because Before Sunset didn't make nearly as much money as Before Sunrise and Before Sunrise was hardly a box office smash, demanding a sequel.) To operate upon our memory and our attachment to the original, to offer us up something to replace or supplement our imagined future for the characters in question.

Celine compares her relationships to that one night. That makes sense within the reality of the film. Jesse spent four years on the book, so clearly he does the same. But, what is fascinating to me right now is how much I (and presumably everyone else in the audience for the original) does the same. Movies, even the painful ones, are like idealized relationships we have, an hour and a half or so at a time. And, often, our lives in comparison, must not seem like much.