i only read about it in books

(I'm writing a thesis because my memory is not always what it used to be. Throw some movies in there and they'll stick. But, throw a communication theory and I will absolutely be able to understand it and explain it back to you but later I will have to look up the specifics again. Tonight, I wanted to start with a reference to encoding and decoding in basic communication, and I wanted to reference whoever first used the terms in the way I mean them here, but my theory book is... Well, it's either on a shelf in my office or another grad student borrowed it. Probably the latter.

Instead of the book, I google it and find it's totally someone obvious--for we communication scholars, anyway, maybe not for the rest of you--Stuart Hall. 1973, he wrote a piece calls "Encoding and Decoding in the Television Discourse" and apparently that's where people started using the terms as I'm about to mean them.)

Backtrack to The Beatles and "Eleanor Rigby"--the namesake for the titular character (Jessica Chastain) here. All the lonely people / Where do they all come from? It shouldn't be a surprise that someone--me, now--might suggest that we are all lonely people. Until we're not. In our best moments, we throw a message out there, or put a version of self out there, and someone responds to it with gusto and appreciation. We express ourselves and we can hope someone will care. Usually, someone will care, at least a little. They're only human, right? It's instinctual to care. The bigger problem is when we don't actually express ourselves. When we hold it in. When we choose not to communicate.

Not that we can ever actually succeed at that, of course. Everything we do communicate something. But, it's in the deliberate communication that we insert meaning, that we encode a specific message that we hope is understood.

Just now in the film, Eleanor was framed next to graffiti:

And, it occurs to me how on-the-nose so much of the specific content is in this film in relation to the themes and the larger story. Lillian (Viola Davis) tells Eleanor, "I don't really know who you are," and Eleanor replies, "It's okay. Neither do I." Eleanor's mother (Isabelle Huppert) reminds herself of her past out loud--a particular piece of music on which she played second violin. Stu (Bill Hader) tells Conor (James McAvoy) that he doesn't know how to be his friend anymore. The film is full of people both saying exactly what they mean when it might be more realistic not to and vice versa, not saying what needs to be said when an the explicit language makes more sense. For example, Conor talks to his father (Ciaran Hinds) later and referencing his son's death, Conor can't say "died." It seems like a cinematic conceit... Not having trouble speaking about the death, mind you, but not being able to say the specific word. Instead he said, "...when what happened, happened" and you know in his mind, the meaning is explicit. By putting more words on it, he's spending more time on the difficult memory. The movie also avoids being explicit. We never actually learn how Conor's and Eleanor's son died. The focus on the bed in two instances--when Conor comes home alone after Eleanor gets out of the hospital (and combine that with Conor sleeping on the couch later) and Eleanor seeing a blurry memory of the three of them on that bed--suggests, if anything suggests anything, maybe the baby just died. SIDS perhaps. Died there in that bed. And, of course, Conor couldn't return to that bed alone.

Lillian, just before Eleanor leaves class to get away from Conor, references Ken Bergens. Google ain't coming up with anything on him. But, the line and its timing is important to the on-the-nose thing. Bergens, according to Lillian, asked the question, "Can we compellingly re-inscribe what it is to be a person in a way that moves us away from the individualist premise and toward the relational?" Defining who we are in relation to others instead of apart from others, that is. The Disappearance of Eleanor Rigby tries to have it both ways... Or rather, it argues that it is both ways. Eleanor manages to define herself separately, Conor manages to define himself separately, but this is Hollywood and it wants at least the hint that a happy ending might happen later, so of course they also cannot fully define themselves without each other because in cinematic terms that opening sequence, the run from the restaurant, ending up in a park in the dark, surrounded by fireflies--that's romance, that's love, and Hollywood wants that to be forever even if it wants to indulge in the pain of forever not being a thing.

I've neglected to come around to the encoding/decoding thing, but for a passing reference. But then, so what? I may have accidentally made my point. I let you know, parenthetically, where I'm going to be going, and then I never go there. And, why? Because plans don't matter when it comes to communication. Not really. You can memorize a speech, or a single line you really want to say to someone, the most important line ever, but in the moment, face-to-face, the speech is unique (like I've argued many times in this blog, each viewing of a particular film is unique, too), the line is different than you planned it. Maybe rehearsal killed the feeling of it, or maybe it turned the feeling into something it wasn't. Or maybe the moment is just not quite how you imagined it. Or the person (or persons) you are talking to is not responding how you had hoped they would respond. The conversation begins and you're ready, but it twists and it turns and it drifts away from the thing in your head, just as life does, and you're lost. The moment is lost. And, it doesn't matter how you're encoding your message, or how they're decoding it. Because sometimes, the message is so personal, so individual, so impossible to translate outside your own head, that you can never properly encode it in the first place. 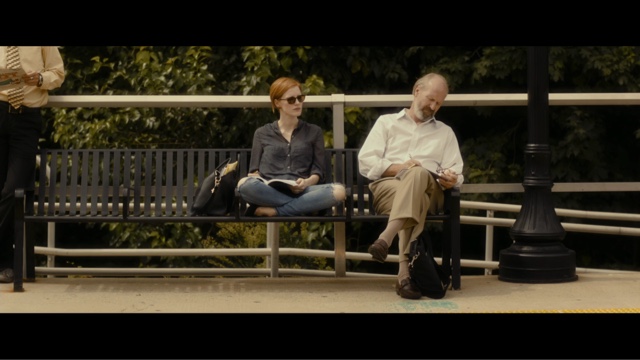 Back to forever and things being too on-the-nose in this movie, Eleanor asks her father (William Hurt) how he and her mother have "made it this far." (Not that Eleanor would never ask the question, of course.) He answers:

Endurance... Everyone starts out thinking "this is forever." But then things get hard at some point or another. And then other things don't pan out the way you thought they would.

He pauses then continues:

I suppose the trick is not running for the hills even when you think it's the most rational thing to do.

That, right there, is so much of this movie in a nutshell. The specifics don't even necessarily matter, except to mean that when there are hurdles they are particularly painful hurdles; life breaks down, falls apart, and you figure out how to deal with it or you don't. Most of the time, no one has any useful advice on the how of it. Other people can help. But, mostly, it's up to you.

Eleanor's mother counters her father's version of things--especially that urge to not run away. "Run for your life, El," she says. Eleanor asks, "What is that supposed to mean?" Her mother continues: "Well, this is all too realistic. Run away for a while."

And therein lies the problem. Different wants. Different urges. The interesting thing is, this movie is acknowledging the problem with Hollywood's take on couples, and even its own ending. But, you gotta remember, Eternal Sunshine of the Spotless Mind is one of my favorite movies. That ending, the implication of going at it again and again and again even though it will fail every time--it's poetry. It's painful. But, it's beautiful. This movie ends in that same place, implicitly. It avoids stating the obvious. But it goes there anyway.