the truth, the whole truth, and nothing but the truth

And, now I've explained it. And, explained it weirdly. Shoulda tried to make it more poetic, maybe write a song or create some animated presentation. Or just let it sit and be, without explicit explanation.

If you didn't read yesterday's entry, you just gotta let it go and be confused for a moment, as Murder in the First begins and Christian Slater (and Gary Oldman) brings us back to Kevin Bacon. (We'll also see William H. Macy for the second time this month, plus none other than Stephen Tobolowsky who will take us back to Groundhog Day for tomorrow.) 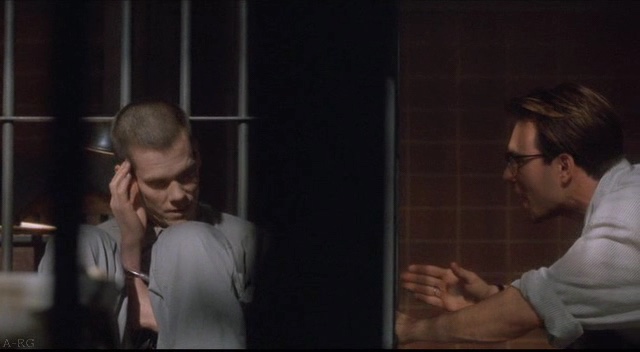 Some news reel voiceover after the (first part of the) opening credits (which has offscreen dialogue playing behind the black screen), and it's like the Lazy Voiceover* and Lazy Text Crawl got together and said, "Let's make sure everyone realizes this is an old-timey movie. You know, not like they saw the damn trailer and know exactly what they're here for."

(* Decided to keep the name simple and explanatory. Don't need to be clever to point out lazy filmmaking. Just gotta be honest.)

And then, when the film seemed to be starting, with some naked Kevin Bacon in a hole (or the hole), Slater starts narrating. Couldn't define "rehabilitate" later in dialogue or in court, no, gotta voiceover that crap.

I don't want to complain about this movie. I like it. And, I've been working my way around to it for a month now. But, no matter how good you are, you should not resort to Lazy Voiceover because you don't know how to fit your exposition into the dialogue later.

(I must apologize for these short paragraphs. My thoughts are coming out in short bursts (probably) because I was just livetweeting the move Unfriended right before I turned on Murder in the First.)

Voiceover ends and we get the rest of our opening credits.

And, I get distracted by some historical research. I mean, you gotta figure a movie like this will take some liberty with the details, but... For the record, Henri Young was apparently a bank robbery who liked to take hostages and was convicted of murder as well. He did not steal five dollars to feed himself and his little sister. The movie exaggerates the length of his stay in isolation (after being part of an escape attempt) and also exaggerates in the other direction the length of time after his release from isolation that he killed fellow escapee McCain, as did the San Francisco Examiner at the time of the trial--

--but Young's attorney (or attorneys; I haven't found out if Slater's character is a real individual or an amalgam) did put the prison system on trial. It would seem that while Young was sentenced to a long term in solitary, he was out within a few months, and it was another year before he killed McCain. The movie alters the details to raise our sympathy levels.

Stephen Tobolowsky shows up as Slater's boss and I find myself imagining that he's playing Ned and Sandy Ryerson's father...

(Grandfather? Tobolowsky is aged 43 years for filming here. It is 1941. Assuming Groundhog Day is set in the year of its release--1993

(It's arguably not set in that year, but that is an issue I covered back in year one, probably more than once.)

--then Ned Ryerson (and his twin brother Sandy) is 42, born in 1951. This Tobolowsky could be that Tobolowsky's father, but I choose to assume he's got a kid at home that will be the father of the Ryerson twins. Or better yet, a daughter who will be their mother, hence the name change from Henkin to Ryerson. Not sure how they got from San Francisco to Cleveland. Maybe young Mrs. Ryerson and her husband fled all those hippies and militant protestors in the sixties, took their teenage boys off to Cleveland to get a good education at Case Western...

Because, you gotta know, Groundhog Day is also a true story. Every movie is. North, Fargo, Cape Fear, What's Eating Gilbert Grape, The Soloist... Oh wait, that last one is based on a true story. Been hanging out with one of its main characters all this quarter--Steve Lopez has been teaching a class at Cal State LA every Monday night and the quarter is nearly over. Come to think of it, a few of this month's movies were actually true stories... Or rather fact-based stories. Selma, Shine, The Soloist, Chaplin, Amistad, The Untouchables, and now Murder in the First. And Shakespeare in Love and Almost Famous were, on slightly different levels, also built around events that actually happened. But, fact-based or not, there's truth in every film or that film isn't much worth spending time with. The Help may come it story from an unfortunate direction but that doesn't mean there isn't some important truths within. August: Osage County may have been written for the stage but that doesn't mean it doesn't tell us truths about family. Like Beginners offers truths about love and Dazed and Confused offers truths about being young and looking forward to life.

Murder in the First takes a lot of liberties with it facts, plays on our sympathies by making Henri Young feel like an innocent, corrupted by the system--

(which, arguably, even a bank robber is a bank robber because of the larger systems at work, but don't expect a particularly audience-friendly film like this one to take on that notion)

--but it's aiming for truth. It's trying to tell us about the prison system then and the prison system now. It's trying to show us (as many a film does, as The Soloist did) how being someone's friend can be more important than just about anything else. It doesn't really matter that the real Henri Young was a murderer before he got to Alcatraz or that he didn't die in his cell after the verdict (he spent another 8 years in Alcatraz then was transferred away, eventually got out and jumped parole when he was 61 years old. After that... ? He might still be alive, albeit very old. But, that doesn't matter to the story. Like one of my favorite lines that folklorist Jan Harold Brunvand often uses: "The truth never gets in the way of a good story" except, it's better understood as "The facts never get in the way of a good story" because a good story always tells the truth. Facts be damned, truth is deeper than that. Henri Young needs someone to care about him. Phil Connors needs to make himself worthy of the same. These are truths.

(Quick tangent: this movie's in the Bradbury Building, which we've seen in this blog with (500) Days of Summer, and which we'll see next month in Blade Runner. Also, they were in the Pasadena City Hall earlier--standing in for James Stamphill's (Slater) workplace. I grew up in Pasadena, lived there for 26 of my years.)

Even Unfriended, which I watched earlier this evening, bears some truth. It's a fairly straightforward horror film built around modern technology for those who don't know it--the whole film takes place on a computer screen, in fact, a good portion of the interaction happening over Skype. It wouldn't seem like a story that gets at truth, but you see friends and you see how their relationships break down because each one of them is human and thus capable of betrayal, capable of hiding things, having secrets. Plus, there's a revenge. The Los Angeles Times ran a piece the other day--Oscar day--about the theme of victimhood running through a few of the Best Picture nominees (The Revenant, Room and The Big Short) and I think there's room to argue that even more of this year's nominees, and plenty of the other films released this past year, or any year, that operate around victimhood, operate around revenge, operate around redemption and what it takes to survive in the face of hardship... Hardships of so many kinds. This is the definition of drama, of story. Character wants something. The world takes it away or keeps him from it. Character goes after it and maybe he succeeds in getting it; usually he succeeds, but sometimes he doesn't, but that's a truth, too.