i'm going out to punxsutawney

(For the record, most of what follows was written prior to today. For my Monday-night class this quarter, we've been having to write drafts. I don't normally like writing drafts. That is why I like the blog format, I think—I just write and what comes out is what is, with only minimal changes as I go. Anyway, there has already been a 500-word assignment setting up the topic, and a 750-word draft that I put together as a sort of teaser, ended on a cliffhanger even. (I've also handwritten the last several lines (probably) of the final piece.) The final version is supposed to be 1200-1500 words. I have been taking word count as a challenge in this class, so I may aim for 1200 even. We'll see. [Note: I finished at 1320, then cut back to 1200, which was not easy.]

As I write, because it is once again the 2nd of the month, Groundhog Day will be playing. This blog has been going for 31 months now. I have watched this film about 396 times in that span. That's from start to finish. There were plenty of partial views as well. And, of course, I had seen the movie maybe a couple dozen times in the two decades previous. One more is one more. And, per the last couple days' (942 943) worth of recaps, this movie is every other movie, and they are all part of one giant true story. That is the context for the following.

Also, the context, as you will see, is my visit to Woodstock, Illinois 25 months ago. Enjoy. And, if I do this right, be enlightened or inspired. If nothing else, maybe you will yearn to tell a story of your own to someone else... or to me. Express yourself. Speak up, speak out. Live life and be a part of the giant story we've been telling for a long, long time.) 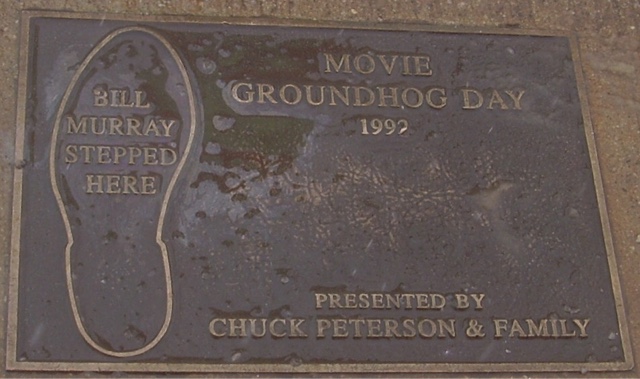 It is cold and my feet are freezing. My boots were not made for the snow. I am in the town square of Woodstock, Illinois, not far from a little restaurant called La Placita. La Placita seems out of place in what seems a very white town. Standing outside it now I am still full, though, from a burrito that rivals some from LA. There is a plaque on the sidewalk in front of the restaurant, the outline of a shoe and the words BILL MURRAY STEPPED HERE.

The crowd gathers in sloppy circles around this plaque and waits for the tour guide to catch up. Our guide, Bob Hudgins, was the location manager for the movie Groundhog Day. He and I talk several times over the next two days. He defers to me to answer questions on the next day's tour. Right then, I am eager to speak to Groundhog Day scribe Danny Rubin.

I have been writing my Groundhog Day Project blog for six months, watching Groundhog Day every day. The opportunity to meet Rubin that weekend pushed me into the trip; flying across the country on a whim is not my usual way. I have a Groundhog Day Project postcard in hand in case I get nervous talking to him; I will just hand him the card awkwardly and run away. Hudgins catches up to the crowd and talks about selecting the location for the Tip Top Cafe and creating the diner out of an empty space. I know this. I know most of the information offered on the tour. I am more interested in the experience than the information. This is a pilgrimage.

A year later, reporter Michael Schulman writes, "Though he [me] had never been there, he had the eerie sensation of knowing his way around."

I am not interested in an autograph, nor do I have set questions in mind if I get the chance to talk to Rubin. I just want to have a conversation. I had been to many book signings and conventions in my life and inevitably, I try to interact with the author or celebrity when I get to the table.

Don't get me wrong; I take the autograph as well.

Rubin signs a poster for me at the symposium later, but I really just want to talk, to get to know him. I stand off from the crowd and wait. Rubin approaches the Cafe even more slowly than our guide. I keep my attention split, in case Hudgins offers up some juicy behind-the-scenes detail I do not already know, but move to where I can intercept Rubin, who also keeps his distance from the crowd. I approach him and, briefly and efficiently, I tell him who I am and I offer him the postcard. He tells me he has heard about my blog—yay—but he says little else. I tell Schulman in an interview later that Rubin was "standoffish."

I am too excited to be offended. But I am disappointed. I do not know what I expect; perhaps Rubin would find out who I am and he would want to strike up a conversation about the blog and about the film and about life, or we would become the best of friends and I would get an exclusive interview for my blog, maybe even get him to tweet about it so my audience would grow. Instead, I get next to nothing. One year later, after an unfortunate delay pushed the piece too far from the holiday to be published right away, Schulman publishes his piece about me and about Rubin and about Woodstock and about Groundhog Day in an online magazine—Believer. He calls it "The Accidental Swami" and I am its opener, not Rubin. That it does not run in the New York Times, as intended, is a different kind of disappointment. It isn't personal.

I am excited all over again because Schulman shares my story. He begins:

In April 2013, Robert Black, a grad student at California State University, moved into a small apartment in South Pasadena. He and his wife of ten years had decided to split up, and he found himself spending much of that summer alone. He missed his kid: Hayley, Kieran, and Saer. "I needed something structured and regular in my life," he recalled. On August 2, Black wrote a blog post entitled "On me in 3... 2... 1..." It was a line from the 1993 film Groundhog Day, which he had vowed to watch every day for a year.

He briefly describes the film for those unfortunate people who have never seen it—in short, I would call it the story of a man reinventing himself and reinventing himself until he becomes a good person—then he returns to me for two more paragraphs. He comes back to me again later in the piece, as well. My pageviews rise.

I read why Rubin was standoffish. Schulman writes:

If Rubin was hesitant to play swami, it was perhaps because his mind was elsewhere. His father, in Florida, was in bad health. (He died three weeks later, on the same day as [Harold] Ramis.)

Several people console me that day, expecting me to take Ramis' death personally. I am selfishly disappointed that Hudgins failed to get my contact information to Ramis' assistant prior. I realize that I do, indeed, take it personally when I spend three days in my blog memorializing him. That disappointment dissipates.

Having finished his contract with Harvard, Rubin was feeling untethered... [H]e felt out of sorts, unable to match the fervor of the Groundhog Day rhythm he'd had at Harvard: "I want to be in more of a routine."

I read this and the disappointment still inside me is gone. I wish I knew at the time. I wish I could have done something. I wish that when I was spending three days memorializing Ramis that I had the knowledge to lament for Rubin and his father as well. But, most of all, I wish that one year earlier, in Woodstock, I would have understood the reason I was there.

I know now why I went to Woodstock.

I went to Woodstock in search of meaning, in search of an epiphany. There was no epiphany. No swami, accidental or otherwise. Not there, anyway. Not outside myself. That is one lesson to take from Groundhog Day, from watching it every day and writing about it. It is the lesson to be taken from my weekend in Woodstock. The title of my upcoming master's thesis is "Blogging to Make Sense of the World" and therein lies what I did not know then. It was not about the film. It was not about Rubin or Ramis or Woodstock. It was about me. It was about me reinventing myself and reinventing myself. It was about me writing my self into existence, one blog entry at a time.

The epiphany was there all along.

The pilgrimage was just one leg in a journey that would bring me back home, a year forward to read Schulman's piece, and another year since to keep writing, and by writing to keep living.