a tedious collection of hours

Who needs a plot anyway? Who needs plans, our for things to end up how you want them to end up? (Or for a blog month's theme to outlast its novelty... twice.) Changing gears a little today with Before Sunrise. 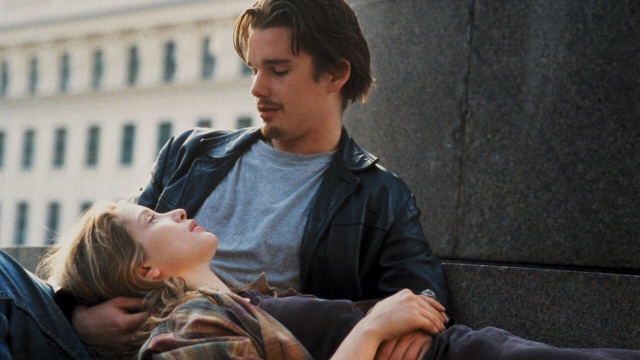 Jesse's (Ethan Hawke) 24-hour reality show idea has, of course, been surpassed by YouTube and Twitter and Tumblr and Snapchat and Vine and Facebook and whatever else everybody's using...

It amazes me that with the setup of a thing like Boyhood anybody hoped for a plot. Linklater is kind of the anti-plot director. I mean, this Before trilogy, Dazed and Confused, Waking Life, SubUrbia; even Bernie which is based on a true story kinda meanders. Before Sunrise (and its two (so far) sequels) is quite deliberately plotless. It's just two characters wandering around Vienna, talking about anything and everything.

Good mid-90s fun. The epitome of such films actually got the title Walking and Talking. Unlike a lot of these films, Jesse and Celine (Julie Delpy) are not... bored with life. Celine seems to have a fairly good grasp on who she is, in fact. Funnily, after writing that, I read in Roger Ebert's review that he would call this movie, "a "Love Affair" for Generation X, except that Jesse and Celine stand outside their generation, and especially outside its boring insistence on being bored."

For the record, and because I just looked it up, Roger didn't seem to react too negatively to Walking and Talking. "How did I feel at the end of 'Walking and Talking'", he asks. He answers: "The earth didn't shake, and I didn't feel in the presence of great cinema, but I felt cheerful, as if I had gone through some fraught times with good friends and we had emerged intact." Sounds like an amazing cinematic experience to me. He continues, referencing two characters from that film: "And I found myself remembering Bill, the video clerk and Fangoria reader, and wondering how his book is coming along. He's writing the life of Colette." On the one hand, there lies the road to fan fiction--wondering where characters go after the credits roll (or the book ends)--but also, for me, that's entirely normal. That was definitely how I felt after watching Before Sunrise the first time. Nine years later, when Before Sunset came to theaters, I was eager to see it. Another nine years after that, Before Midnight and while I thought the middle of that one dragged a little, I loved its end. And, I loved that characters that weren't action heroes or genius detectives got sequels,, and those sequels actually added a lot to the overall experience.

(Pardon my silence, but I have realized this movie will probably be a three-day affair, and I'm tracking some stuff as it goes.

But, nevermind that (at least until, say, tomorrow).)

In the meantime, it is worth mentioning just how much of the conversation in this film keeps coming around to death, or at least mortality. Mortality as an excuse for love, I suppose. It is this film as microcosm for life; you have some time, you don't want to be lonely, so you find a friend or a lover or both (or a few of both), and you pass the time together. Still, you die (or get on the train/plane). (I think back on airports where I have said goodbye... Goodbye is a "little death," a darkness that may seem to last forever, until you get to live again.) In the interim, absent loneliness, you get to enjoy things a bit more.