I wrote this movie.

You'll get that later.

I saw the trailer for Richard Linklater's Everybody Wants Some!! this past weekend. It was in front of 10 Cloverfield Lane (which was awesome), and the trailer kinda of made me less interested in seeing the film. Dazed and Confused was so effortlessly set in the 70s and Everybody Wants Some!! looks like it's trying a little hard to be set in the 80s. (To be fair, I don't remember ever watching the trailer for Dazed and Confused; maybe it didn't seem so effortless cut down to a couple minutes.) The Squid and the Whale is quite effortlessly set in the 80s. Specifically, 1986. There's no Wedding Singer-style ridiculousness, no definitively 80s soundtrack more reminiscent of a VH1 special than the actual 80s. It's just set in that time, that place (Park Slope, Brooklyn).)

A couple scenes in, dinner, the family dynamic is set. Frank (Owen Kline), the younger brother, randomly sticks a cashew up his nose and mother Joan (Laura Linney) catches him. Walt (Jesse Eisenberg), the older brother, informs his father Bernard (Jeff Daniels): "We're reading A Tale of Two Cities in English. Is that any good?" Bernard replies: "It's minor Dickens. Popular in school, but I think David Copperfield or Great Expectations is much richer." Almost to himself, "What is it about high school that you read all the worst books by good writers?" Joan remains silent through this, then looks to Walt and says, "You should read it yourself and see what you think of it." Perfectly reasonable response. But, Walt is having none of it. "I don't want to waste my time," he says. Terse, pointed.

Short time later, Frank says, "It'll be weird having two writers as parents." Joan is having a story published in a journal. Frank seems almost proud. But, Walt doesn't hesitate to cut down his mother. "Yeah, well dad influenced her. She never wrote before she met him." A few dense lines about the literary world (Walt is pretentious when it comes to literature) later, Walt proclaims, "Dad is the writer."

Walt passes off Pink Floyd's "Hey You" as his own writing because--shorthand--Bernard at least is out of touch with such popular culture. 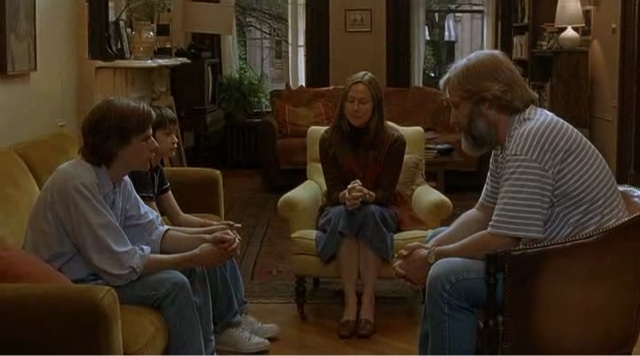 The talk. Frank starts to cry before it's even said. Bernard and Joan are separating. Walt is not emotional at all about it.

Joan bothers to tell Walt it's not his or Frank's fault. Safe bet, Walt's putting the blame entirely on her.

She hides some books she doesn't want Bernard to take under Frank's bed. The next day, Walt brings some of those books to Bernard. It's a conspiracy without any planning. In his new room at his father's place, Walt has a poster for The Mother and the Whore. Before I even look up the movie, that title is almost painfully judgmental. And Walt doesn't even know yet that Joan has an affair. Bernard tells him about it matter-of-factly later. Then Walt refuses to stay at Joan's place. Best bit here: Walt says that Joan "should keep her affairs to herself" after she discusses it, when it's Bernard who told him about it.

Tying back to that discussion about features relating to The Disappearance of Eleanor Rigby. Frank thinks he has his mother's bone structure then calls her ugly when she says he has his father's features.

Walt mistreats a girl from school, tells her outright he wishes she had fewer freckles on her face. Later he tells his father that she's cute but not gorgeous. Horribly judgmental. Also, when she asks him a question about the end of Kafka's Metamorphosis, he answers like someone who hasn't actually read it, only memorized what his father has to say about it. In echoing his father, Walt is actually a bigger jerk than than his father.

Joan and Bernard are awkward with each other, which makes sense. The separation is new. (My ex and I have gotten to a more comfortable point, able to do things together with the kids sometimes. I remember when it was painful to come back to this apartment, when my wife lived her with the kids.)

When Frank throws his ping pong paddle at Bernard, I'm inclined to link this film to yesterday's--Antichrist. I mean, obviously, I got from there to here because of the broken relationship angle... Or maybe that's not so obvious. But, I'm thinking that this movie, without the graphic sex and violence, conveys some of the same point--that men and women can be horrible to one another. Both films seem set against the idea of marriage, men and women together. Hell, both films offer up characters who maybe shouldn't be spending time with anybody, regardless of gender.

(It's odd that Lili (Anna Paquin) and Ivan (William Baldwin) seem to be the only people who recognizes "Hey You" when Walt performs it at the talent show. I mean, I was only 3 when The Wall came out, only 10 in 1986 when this film is set, and I damn well knew what "Hey You" was.)

Walt's explanation to his therapist about passing off "Hey You" as his song was that he felt he could have read it so the fact that it already exists was just a technicality. On the one hand, that is a lame excuse. On the other hand, I've felt that. Some movie hits a little too close to home and it feels like my story. Not necessarily that I wrote it but maybe it was written about me. It can be quite cathartic. It can also be a disappointing--since I did not actually write it--but catharsis outweighs disappointment every time.