that this was real

I wanted to write a review of Batman v Superman: Dawn of Justice for my other, far less regular movie blog (the one where I actually review movies sometimes), but kept feeling it would end up being a list of nitpicks about the nitpicks (not that I am above nitpicking) and I didn't feel like writing that sort of thing--

plus, I already had a movie scheduled for today-Before Sunset

--but oddly, or maybe not so oddly, something I wanted to say in that nonexistent review dovetails into something worth saying in regards to this movie, both within its story and without its confines (i.e the way the audience might react to it). That is, what you want out of something or out of someone is a far cry from what you should expect. Or, it should be. I mean, Internet reviews and comic book nerds are harping on Batman v Superman yet the audience (and I realize this is just anecdotal evidence) where I was seemed to love it, applauded at the ending and everything. The thing is, so much of the mass audience does not have detailed expectations about what should or shouldn't be in a Batman film or a Superman film, but comic book nerds do. For example, I've seen complaints on Twitter, Facebook and IMDb about how Bruce Wayne is not much of a detective in this film yet Batman, traditionally, is the greatest detective in the world. Take this film as its own thing and it never says that Batman is a good detective; in fact, his horror films-esque take on attacking criminals after 20 years of doing so suggests that he has been much more about brute force than any detection. Meanwhile, on the IMDB board for Before Sunset, I saw some people debating whether or not Jesse makes sense as a writer, whether or not he was "literary" enough in Before Sunrise. Like, people made up in their minds who Jesse was after the first film and got stuck on that idea rather than adjusting to who he actually turned out to be.

Because this is a true story, as is every other film, and all of these characters are real (even though Celine specifically claims otherwise), and though we only knew Jesse and Celine for that night in 1993 and now this 80 minutes in 2003, they lived those nine years in between and the 20-something years before. We get a window. I choose to assume (unless awful writing and acting makes me think otherwise) that characters keep living before and after the confines of the film.

That being said, why is it that comic book nerds, who should be entirely familiar with characters changing over time and characters existing in different incarnations depending on who is writing them or who is drawing them or what particular universe they are in, have trouble reconciling a new version of those characters as something... acceptable? I mean, you can accept a multiverse and Crisis on Infinite Earths and The Age of Apocalypse but you absolutely need this Batman to be your favorite Batman and this Superman to be your favorite Superman... Actually, that's not even it. It is not about favorite. Sometimes the character being some flawed version of the ideal in your head is what you want when you're a comic book nerd but it still has to be a very specific version of that flawed version so you can echo the complaints you've been making with every damn issue, every damn month, because you certainly wouldn't stop reading just because you don't like the current writer or his idea of who Batman or Superman or Daredevil or Wonder Woman or whoever is. Truth be told, I don't read that many comics anymore. But for a good while I went to my local comic book store every week, had a pull list, read all the obvious books plus an increasing amount of eccentric ones. And, there are versions of characters I like more than others. There are versions of characters I wish made it to the big screen. But, I try to take one medium separately from the other. I try to take one film separately from another. (Barring franchises, of course; like Superman in this latest film is supposed to be the same Superman as in Man of Steel.)

Who I thought Jesse might be, here--that doesn't matter once he shows up again... Unless the two versions (see that parenthetical just now) don't seem congruous. I think we were all so enamored with both Jesse and Celine because they were both rather intelligent, or at least they were thinkers. That a thinker would become a writer--that makes sense. Plus, to avoid this film jumping off from a silly coincidence, either Celine or Jesse had. To be at least a little famous so that the other could find them. While Celine was, and now is far more, political, she seems too independent to be a politician or some public figure. So, what better way to make Jesse famous than to make him a writer, especially since he has only written one book so far, a book that took him four years to write, and that book is clearly an effort to capture something he missed, or thought he missed. (Just as, perhaps, Celine's waltz song is.) 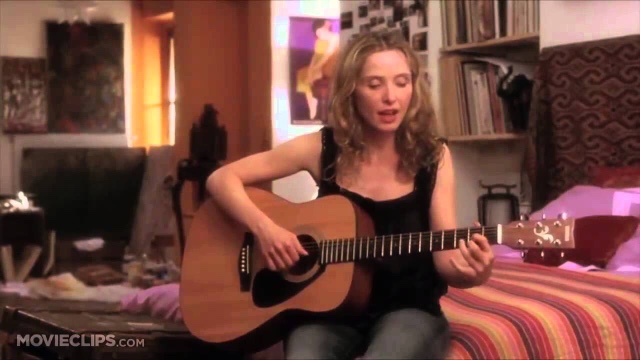 Plus, there's this: whoever I think a character should be, unless I invented that character (and sometimes not even then; just ask Kimbly Freemartin in my book Lion Horse Tree), I must put that aside for the character as it is. Hell, even when watching a film I've seen before, my understanding of a character can change from one viewing to another. Like when I saw Before Sunset in 2004, and it got to that final scene and that last shot of Jesse smiling and touching his wedding ring, I questioned his choice. Watching it now, I'm glad he stays. That is because who I was in 2004 is different from who I am in 2016. I was married just two years before Before Sunset was in theaters. I'm four years past our initial separation now. My ideas about romance and everything that is wrapped up in couples, generally, Jesse and Celine specifically, has changed... Or rather, my impulses regarding as much has drifted to another point along the continuum of what I will think, do think, have thought about love and romance and relationships.

Jesse married his wife because she was pregnant. In Before Sunrise, he told Celine about how his own parents got married under the same circumstances and were never really happy together, eventually got divorced. Of course, he's going to have a damaged view of his own reality. Celine's parents have been together for 35 years but are still happy, but Celine has been disappointed by the men she's been with, so she actively tries not to get too attached. We see our world as we see our world. How right or wrong is secondary. How accurate or inaccurate, as well. What we see becomes our reality.