Ed O’Neill’s Dutch Dooley is a strange character. He used to drive a cement truck—Reed refers to him as a “truck driver”—but now he owns a construction company. That is not the strange part. He can cook a pretty good meal—I don’t know what it is he’s making early in the film, but it seems to be deliberately complicated and fancy just to let us know that he can cook, he’s better than the working-class schmo he seems to be. Later he’ll take Doyle to a greasy diner and even later proudly announce, “nothing burps better than bacon.” See, beyond the fancy cooking and the cigar smoking—which in ‘91 was more of a rich guy thing, right?—he is also prone to vulgarity and violence. He’s not above introducing a kid to pornography and he’s not above abandoning a kid on the side of the road in the snow. He’s also quick to offer a job to a guy in need. He’s kind when it fits the plot and rude when it fits, too. Stephen Hunter, in his Baltimore Sun review, says it well:

But almost nothing is worked out or developed, particularly the screenplay’s own attitude toward Dutch. At times he’s a ludicrous blowhard who seems deserving of the young man’s icy contempt; at other times, he’s a goofy child, innocent but ridiculous; and at still others, he’s quietly competent, one of those stoic blue-collar aristocrats like cops and infantry sergeants who just laconically handle things.

I’ve already compared this film to Planes, Trains & Automobiles, but I must say that Dutch is not an update to Del Griffith, though in terms of how he fits the story he is effectively Del if Del were the main character instead of Neal Page. However he fits the story structure, though, his character is something more like a mix of Del and Neal from the earlier film. He isn’t inadvertently annoying because he’s seeking attention; he’s deliberately annoying because he’s trying to force attention.

(Let us ignore his line about not caring if Doyle lives, dies or “grow[s] mushrooms in [his] crack.” And, certainly ignore this rant:

Well you better start thinking about a little something else besides your own spoiled ass! I took on this idiotic assignment because I love your mother. I gotta wonder how nuts I am. Man I’ve met some scum in my life but you beat all, man, you are absolutely worthless. You know what, this is a full blown mission, you’re not gonna beat me. I’ve had my head split open, my nose mashed, I’ve been kicked and beat and left for dead, and when I set you on your mama’s doorstep, you’re gonna be one whipped little puppy.

Just ignore the worst of Dutch… Should probably include the kidnapping and child endangerment as well.)

Doyle is not wrong when he describes Dutch as a “great big demented child.” One of the biggest problems with this film, in fact, is that Dutch doesn’t really change from the beginning of the film to the end. Counter this not with Del Griffith necessarily changing, but our understanding of who he is definitely changes over the course of Planes, Trains & Automobiles. We know who Dutch is almost immediately. When he lies about how much cash he’s got and speaks of old fashioned male pride, we aren’t actually learning anything particularly new about him. His actions are only ever surprising in just how outlandish writer/producer Hughes and director Faiman will let him be. 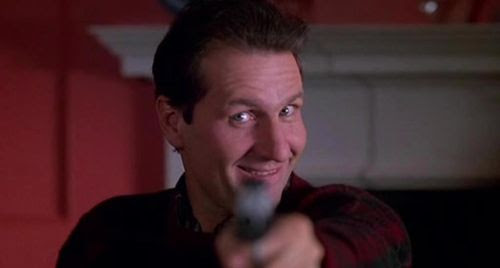