everything is not an anecdote

It’s been a while since I watched Planes, Trains & Automobiles all the way through. I did speed through it several months ago, to find the sequence filmed in Woodstock, IL—this bit.

For those of you not keeping up with this blog, Woodstock is where they filmed most of Groundhog Day.

I find myself just sitting here watching. First day of seven, and as I said, it’s been a while. I must say, these two characters—Neal Page and Del Griffith—are drawn very clearly. The excellence of two actors well acquainted with improv and comedy coming through.

Amazing thing about these two guys—the characters, I mean—is that Del is painted as the one with all the annoying behaviors, but he’s also the one who is clearly quite sure of and comfortable with who he is. Neal, on the other hand, he’s the straight man, our in for the action, but it’s fairly obvious that he’s also a bit high strung. Del’s got friends all over—the guy who owns the Braidwood Inn, for example—but I can’t imagine Neal having the same.

Unfortunately, I think I’d be more like Neal if I traveled like either of them do. But, I wouldn’t want to be a businessman or salesman that travels all the time. Traveling some of the time—like I get to as a coach—that I can do. Speaking of which, a quick story: latest coaching trip, flew up to Portland for a tournament. We were flying out of Burbank. That flight was initially delayed then canceled. Airline got us a cab to LAX, where we then had to wait a few hours to catch a different flight to Portland. Because our original flight had a layover in Phoenix, we would actually be arriving in Portland earlier than originally scheduled. But, then after sitting in the airport for a few hours, they change our gate. Thing is, after sitting there for so long—not to mention having a different flight number than a) we had originally, obviously, or b) they had told us we’d have when we got to LAX—we barely noticed the gate change until the final boarding call. Fortunately, the new gate was just a good sprint away, and we made it, just.

No cars were burned, and we did end up in Portland early. But, still.

There’s also the time, speaking of road trips, that I stopped at a rest stop in Texas, while driving from Arkansas to California to come home. I was in a moving truck, had only been driving it for nine hours or so, wasn’t the most familiar with it that I could be. So, I inadvertently leave the parking lights on—the rest stop is bright enough that I couldn’t tell from inside the truck—I sleep for 3 hours, and wake up to a dead battery. Spend another hour or so—at about 5 in the morning—looking for someone at the rest stop with jumper cables (and a willingness at that hour to use them). Finally, some county maintenance truck comes by. The driver is a local. He drives back to his house and returns with jumper cables. We get my moving truck started, In thank him, and head off.

Again, no cars were burned. In fact, I have never been involved in the burning of any cars. A superstitious person might knock on wood at this point, but I will tempt the fates instead. 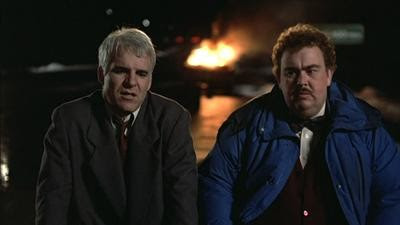 And, I have little else to say today. Planes, Trains & Automobiles is a movie you either really enjoy or just don’t. I fall in the former camp.