...it's one of my worst faults

(I wish I could title this entry, “don’t you just love every day” but I am not in that great a mood tonight.)

I think it is that I like April... or I can relate to her, at least. That feeling that you do not belong, that everything about you is just wrong... well, maybe not everything, but the feeling is just a different level of the same. The feeling that no matter how hard you try, it will not matter anyway. Or, if it would matter, you will just be too timid or too weak-minded to try.

My point is, however much this film may be flawed, I think I can relate to the character(s). For example, my family is doing a big Thanksgiving thing this year—just a handful of days from now—and there have been emails going back and forth about who is bringing what, and I have yet to respond because, well, I just have not had time to think about it. Between grad school work and teaching and, you know, life, if not for this blog and the theme I chose for this month, I would not really be thinking about Thanksgiving coming up at all. I will get to it, maybe try to make something Wednesday night or Thursday morning, but it will be a last minute choice as to what it is. In the meantime, life goes on. Got papers to grade, papers to write, and I worked on neither today because I was cleaning, doing laundry, ironing, running to the store, playing a game of X-Wing (first time my son beat me at that one), picking up dinner, then seeing Cal State LA’s production of Rent again. Closing night...

And, speaking of timidity, I actually scheduled an audition for this show a while back. I did not end up going because, you know, I was feeling a bit timid. Sure, there were some practical concerns as well, depending on how the rehearsal schedule might go with my grad school schedule if I actually got a part, but I think that practical concern was just an excuse so I did not have to get my shit together and try out.

(A strange aside: that moment where Evette laughs at the idea of April having problems and April looks up at her almost menacingly reminds me of why I almost wish I had more time with this movie. Not because I have got more to say about it, but because I really want to cut together a fake trailer for Pieces of April, the horror film. Use that shot with the laughter and April looking up all evil-like, use that shot of April shoving open Wayne’s door, yelling and running it at him, April throwing the salt and pepper shakers into the trash. Use the shot of Joy freaking out and kicking the dashboard. Use the shot of Evette laughing then Eugene laughs as well, humoring her—out of context, that would be creepy. And, the cranberry sauce slamming down into the bowl just now... maybe the Turkey falling onto the floor... there are a lot of shots in this movie that out of context would play very, very differently... 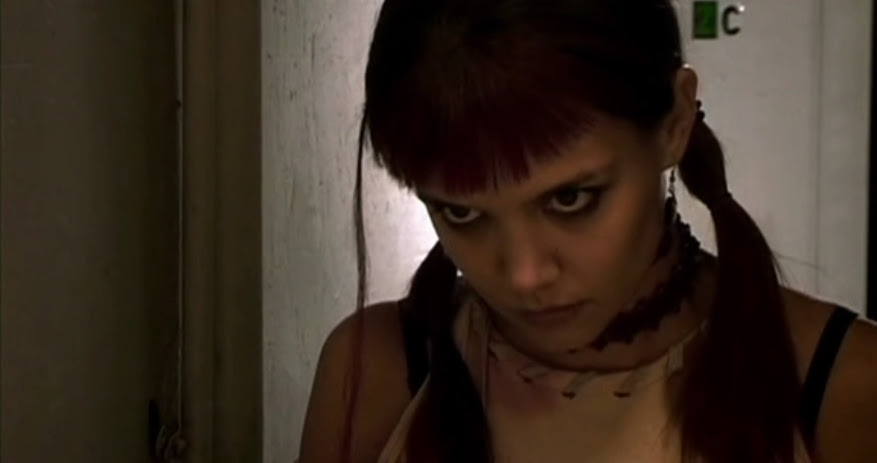 Joy telling Jim, “hup to.” The pan through the empty car to Grandma sitting alone. “Tick tock.” Joy and Jim yelling across the street about all the bad things April has done. Use as a voiceover Wayne,’s “You’re a bad girl. You’re a very bad girl.”)

But, where was I? Oh yeah, my inability to be... I guess it would be bold. I mean I auditioned for You’re a Good Man, Charlie Brown and sent a tape audition into some proof of concept movie thing during the summer—I do not even remember the title of that one offhand. In front of a crowd, I would probably be fine. It is one-on-one that gets to me. Wayne and April just had their spat as I am writing this—and my daughter and I just has a bit of one as well, in a pause from writing this... we are hardheaded when we are tired. I actually got a little more sleep than usual last night but it has still been a long day. I am tempted to reminisce about previous moments in which I was timid. In this blog, many months ago, I wrote about how I spent months debating whether or not to even tell a woman I was interested in her. It is a wonder that I was ever married. A wonder that I ever became a father.

Apparently, I am in a cynical and pessimistic mood tonight. It happens. Even though this blog is therapeutic—and I plan to argue as much in my thesis—that does not mean there are never any setbacks. But, thinking about it optimistically, at a least a moment of weakness means I am human...

Remarkably, just as I typed that, April was telling her Thanksgiving story to the Chinese family, the final version: “Once there was this one day where everybody seemed to know they needed each other. This one day when they knew for certain that they couldn’t do it alone.” I would be better off if I was not alone. I mean, usually I am not alone, not in a literal sense. I share an office, I have students and forensics team members, coworkers and colleagues, my kids at home, my family. It is like one of the many lessons Phil Connors learns in Groundhog Day, and maybe something April realizes in Pieces of April—being human is not really an individualistic thing; being human means being part of humanity. It means interacting and getting along. It means owning up to your faults, telling people what you think of them, even when it might be scary. And, if you are too scared, that is human, too.

If it takes too much out of you to make it to dinner at your daughter’s place in the bad neighborhood, you are maybe not the best of people, but you are still people. If your family abandons you right when it seems everything will be okay, it is fine if you want to pop those balloons and tear down the decorations. Anger, sadness, jealousy, envy, all the bad emotions—they have got as much of a place in our lives, our human lives, as the good ones. If we are lucky, the good ones show up more. But, the bad ones do not make us... less. They just make it harder to be more.

And, as I write that, Joy just had her epiphany in the bathroom and she is approaching the guy with the motorcycle. She is making things better. When you can, you should. But, you should also be accepting of the moments in which you just cannot... It is like the serenity prayer; you need the serenity to accept the things you cannot change, the courage to change the things you can, and the wisdom to know the difference.

It is the courage part that may be hard.