no better way for two guys to get to know each other...

Dutch is not an awful movie. I may have oversold its horribleness. Longtime follower of this blog, Maolsheachlann replied to yesterday‘s blog: “This movie sounds truly awful, and looks awful, and even the title is awful!!” No, no, it’s just very much a movie of a specific time, a specific mindset. It deliberately offers us the character of Reed Standish (Christopher McDonald) just so the worst actions of Dutch Dooley (Ed O’Neill) don’t seem so bad. I mean, really, the whole kidnapping thing, the pellet gun shooting, the abandonment on the side of the road—Dutch means well. Plus, Doyle (Ethan Embry (nee Randall)) is a little jerk who in terms of what’s spiritually a 1980s film, deserves it. Doyle is the kind of kid who would grow up to be the villain in a whole bunch of 80s movies, the upper-class douche who thinks he’s better than everybody else. Dutch, whatever his style, is there to give Doyle some comeuppance.

It’s notable that Dutch has only a 14% from critics on Rotten Tomatoes but 65% from audiences. People like this movie, despite its flaws... maybe because of its flaws.

My thing is this: just because the two leads might be deliberately unlikable doesn’t mean that they don’t both deserve, or at least need, some love. And, it doesn’t mean that the story of the two of them getting to know and care about one another isn’t an interesting one. Watching this film today, I see two characters in need of improvement (much like Neal and Del in Planes, Trains & Automobiles), two characters learning to be better people... well, no. As I said yesterday, Dutch doesn’t really change between the beginning and end of this film. Maybe he gets a little worse along the way, but he basically ends up the same guy he was at the start. Despicable people are not an immediate turnoff for me.

Watching this film back in 1991, though—that was different. I don’t quite remember it, but I know I was familiar with Ed O’Neill from Married with Children, and Dutch Dooley is not a huge stretch from Al Bundy. Despicable, sure. But also lovable. 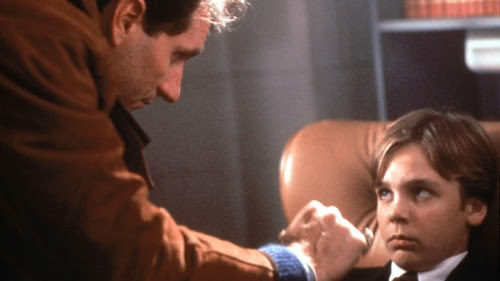 Doyle is despicable in a different way, but also lovable in a different way. He’s just a kid. It’s easy to imagine—and the film would have us believe—that all of his horrible opinions about other people come directly from a) his father’s teachings and b) his father’s example. I didn’t mind so much that he was a little ass, as long as his actions amused me (and, presumably, as long as he transformed into something better in the end).

Watching this when I was barely older than Doyle is, I remember being entertained by the violence. I grew up on 80s films. Violence was my bread and butter. Stallone films, Schwarzenegger films. Lundgren was starting to branch out on his own (though not too successfully). Van Damme was only a few movies into being a thing, but I’d seen all his movies so far, too. I didn’t mind that Doyle jumps straight into attacking Dutch physically. I didn’t mind—and probably cheered—when Dutch first threatened Reed and later actually hit him. And when Doyle beat up those two security guards, that was awesome.

Watching it now, I see the excess in those scenes, the unnecessary.

Be prepared for a couple of jerks acting like jerks, though.