(A note from my sister Bobbie before we get going: Dana in Ghostbusters II has apparently—I did not check, so I can neither confirm nor deny this—not failed at being a cellist but simply took the museum job while Oscar was an infant and plans to get back to the cello when he is older.) 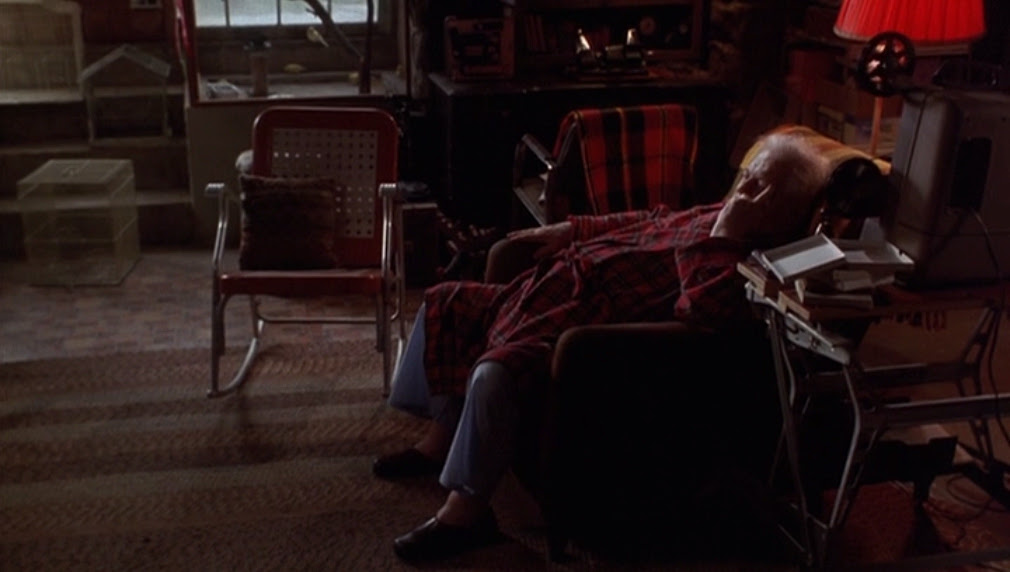 What else is the point to having a parade like they do in this movie?

Thirteen minutes in, Henry reminisces about a dentist visit... and the scene ends with Adele telling Claudia that she can see her roots. She is referring to Claudia’s hair, of course, but maybe that is the line that tells us what the movie is about—Dyer (2010) calls this a “statement of theme” (though, this line comes a little late for Dyer’s version; he says it should come in the first few pages (i.e. minutes) of the script). But, the movie—and Thanksgiving—is about roots, about what has come before, about the past that ties us together. And, about the branches too, the future that pulls us apart, our kids heading off into different directions, our own lives and jobs and hobbies pulling us away from where we have been, who we have been...

Claudia’s father, after he has been watching old home movies, tells Claudia:

I always settled for less... I let stuff get in my way. I did it with my work. I did it with my pleasure... All of a sudden, one day, you’re sitting in a cellar looking at pictures on the wall and you think: That wasn’t me at all. That was some other guy. Some other guy with a smaller waistline dancing with Adele. And the way we fit together...

He then reminds her of a time they stood on the tarmac by the runway. He calls it one of the best moments of his life, and it was just ten minutes long. Whatever the moment, whatever the hour, whatever the day, whatever the year—we all have those moments. Moments that stick with us forever (until we die, anyway). And, looking back at some of those moments, inevitably we might wonder who we were that we were there in that situation. I know I have mine. Moments I regret, but also good moments that happened not because because of who I am but who I was.

Reviewing the film for Variety, Levy (1995) says that writer Richter “vividly captures the paradoxes of family life, its push-and-pull forces, the eternally conflicted feelings of dread and excitement that going home for the holidays invokes.” I would argue that a big part of that push and pull is that family demands we remain who we are, forever and always. I am my parents’ son, my sisters’ brother. I remain as much even having moved out, grown up, gotten married, had kids. I have gone to college, dropped out of college, returned to college, graduated college and now I am in grad school and teaching, and I remain “Little Robert” to my mother because my father is also Robert. I live here many (but not too many) miles away with my three kids (and three cats) and I have been so busy lately that I have not made it over to see much of my family in recent weeks, but I am over there today and we interact as if no time has passed. There was food, there were games, and there was plenty of talk of movies, as there is wont to be anywhere my sisters and I get together. It was every Thanksgiving, and it was this Thanksgiving.

Time stands still on such occasions. We all catch up on changes since the last time, but we also do what we can—not entirely with purpose, but also not entirely without purpose—

(Seeming mistake caught: Tommy, as they are setting the table, says it is not too late for Jack in the Box. Thing is, there is no Jack in the Box anywhere near the Baltimore location, nor Tommy’s home in Boston. Hell, in 1995, I am not sure if Jack in the Box was on the east coast at all. Would have made more sense if he had suggested a chain that exists in all 50 states... I wonder if screenwriter Richter lived in California when he wrote this.

Speaking of... I remember when I drove home to California after living in Arkansas for three months in 2001 eagerly picking up dinner at the first Jack in the Box I saw in Arizona. Had not had Jack in the Box, had not even seen one, in months.)

Where was I? Oh, we do what we can to turn our siblings and our children and our parents and our cousins and our friends—whoever is a regular in our lives—into who we expect them to be. We prefer any change in them to be minimal. Sure, we want our kids or our younger relatives to grow up, want them to go to college and/or to get jobs and lives. But, we also want them to remain young forever. For if they change, then we are getting older. And then we have to weigh our own lives, where we have taken them, who we have managed to become... figure out if it is going okay.

Near the end of the film, Claudia asks Leo, “When you go home, do you look around and wonder, who are these people? Where did I even come from? I mean you look at them all sitting there, you know—they look familiar but who the hell are they?”

Reviewing the film for SF Gate, LaSalle (1996) suggests that the film relates Claudia’s and Leo’s growing attraction “to the whole cycle of family life.” He explains: “This is the irrational impulse at the root of all families, the movie suggests.” We like each other, we want to be together, we want each other to grow and change for the better. But, we also want everything to work exactly as it has always worked. New is scary.

That is why Thanksgiving is always the same. It brings us together and while it reminds us of how much we have changed, it also shows us what has not.