have a gay old time

Planes, Trains & Automobiles is a romantic comedy. I mean, structurally. Tripping over the trunk, accidentally stealing the cab, ending up next to each other on the flight—this is the meet-cute for Neal and Del. In Hinnant’s (2006) terms, this would be the courtship model that begins with “an atmosphere of bitter animosity. It involves the initial antagonism of an improbable pair of lovers who will only slowly come to appreciate in one another the sterling moral characteristics prized in the courtship novel” (p. 297). Now, for Neal and Del, it’s a little more one-sided than that. Del is the friendly one in this pair, Neal the standoffish one.

Del just asked Neal, “You want to take a shower?” Neal misunderstood and thought Del wanted them to shower together. Or did he misunderstand?

Seriously, just imagine Steve Martin’s Neal as a woman, like the Sally to Del’s Harry.

They share a bed their first night together. And, Neal has to sleep in the wet spot. 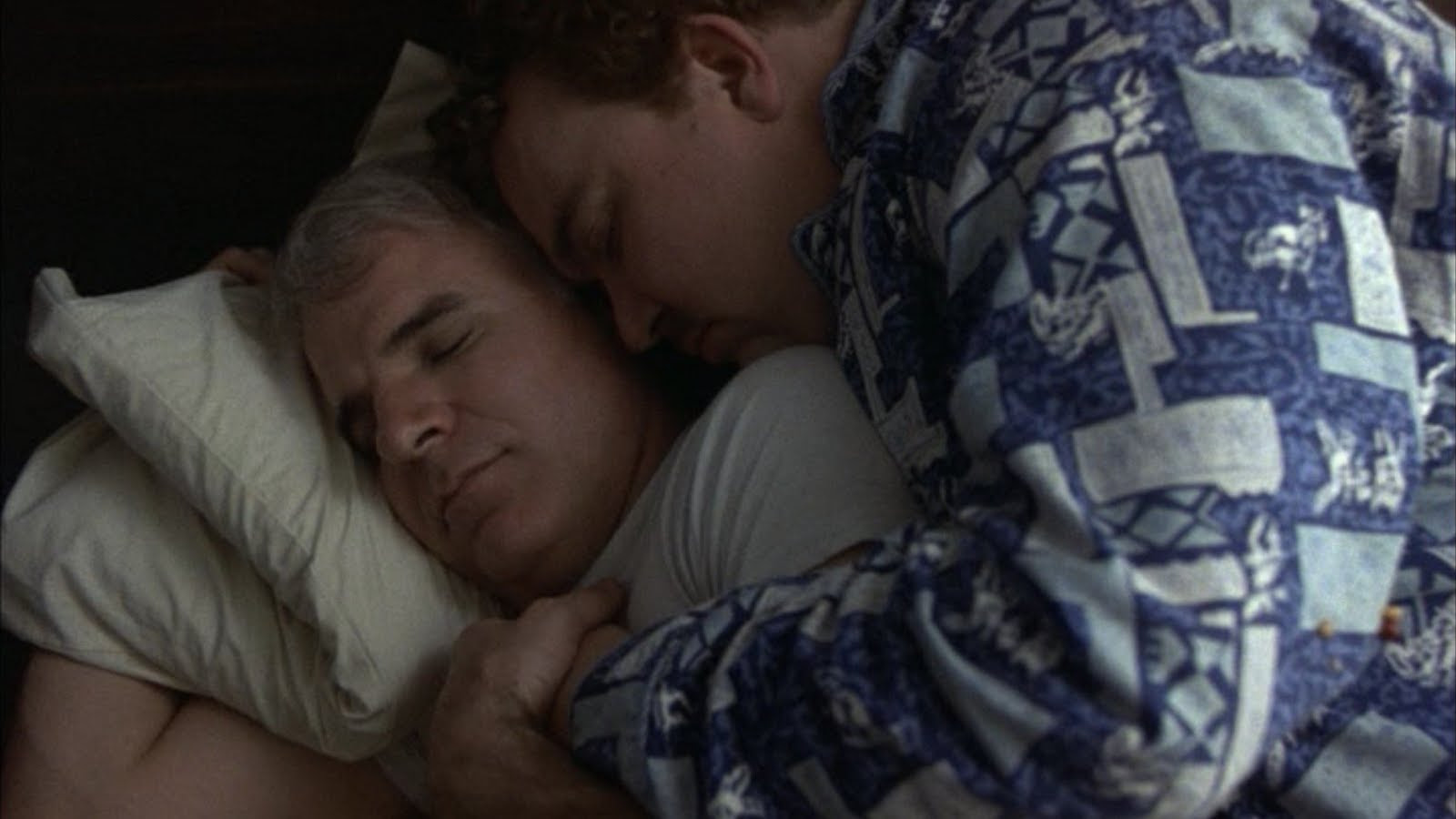 Dowd and Pallotta (2000) tell us that one “ingredient of the classic romance is the present of a serious obstacle, or impediment, that lies in the path of the developing relationship. ...romance must constitute a struggle against some outside force that, intentional or not, serves to separate the lovers and in other ways make difficult the progress of their love” (p. 552). Neal is married. So, there’s a bit of Hinnant’s (2006) third model of courtship and romance—“a drama of prior commitment” (p. 296). If Neal did not have the wife and kids to go home to, he would be free to accept Del’s... friendship. They could have just stuck together in Wichita for a while.

Well, maybe not Wichita. Recall perhaps (though it’s been a couple months probably since I cited it) Henderson’s (1978) contention that “romantic comedy has always been urban and urban-oriented, aggressively, smugly assuming the superiority of city over country” (p. 19). Neal and Deal are stuck, through most of this film, in middle America, the rural areas between Wichita and Chicago, but the movie doesn’t really celebrate those locations; instead, those are the places where things go wrong. The urban environment ofChicago and also the suburban part thereof where Neal’s family lives—that is what ends up mattering in this film. The entire film is about getting Neal to his home, to that Chicago suburb where he lives. He may be tempted by a fling with Del along the way, but ultimately, he returns to his wife and his kids and the life of a guy in marketing.

In a way, the basic plotline of Planes, Trains & Automobiles—Del helping Neal get back to his wife—reminds me of another John Hughes movie from the same year—Some Kind of Wonderful. If you aren’t familiar with the film, Keith wants to get together with the most popular girl in school, Amanda Jones. His best friend, tomboy Watts, supports his cause for a while, until it becomes clear (for us, probably, before her) that she has feelings for Keith. Still, up until the last scene, she is still supporting Keith’s feelings for someone other than her. Here, in Planes, Trains & Automobiles, Del stands by Neal all the way to Chicago not necessarily because Del has business in Chicago—that is never made clear—but because Del is reaching out for human contact. A widower, he is lonely and he has found the perfect... friend in Neal.

Per Dowd and Pallotta (2000), the formula holds up in this film. They explain: “The formula mandates that the lovers achieve an initial rapprochement only to separate but, by story’s end, to reunite as a romantic couple” (p. 559). Neal and Del actually separate more than once, only to come back together each time, until finally, Neal invites Del into his home. This last bit even ties to Dowd and Pallotta’s notion that “the romantic relationship today [has] two parts: the courtship and the routinized life together” (p. 565). By inviting Del into his home, Neal has moved past the former part and into the latter, metaphorically carrying Del over the threshold.