i talk too much. i also listen too much

I think the reason the blog entries have been short this week goes beyond me being kinda busy. I mean, yeah, grad school stuff has gotten to a particular busy point, and I’ve got two classes I’m teaching now in addition to coaching forensics and all the work that goes with that, but I’m not complaining. The thing is, while I enjoy this movie, I don’t think I’ve really connected with it so far. So, it’s hard to get to my usual ramblings at least, if not something particularly meaningful. And, without some good scholarly (or even not-so-scholarly) articles to source on this one, there just hasn’t been a lot to respond to. I mean, maybe I could get an entire blog entry out of my decision to assume (despite his name being John here and not Tom) that Lyman Ward’s character at the beginning of this film was Ferris Bueller’s father, and that Kevin Bacon’s character (if you can even call him a character) chasing down that cab is Ren MacCormack from Footloose and Edie McClurg’s ticket agent is Grace, also from Ferris Bueller’s Day Off.

Or maybe I’d just get that sentence.

But anyway, here’s the thing. I think Roger Ebert helped me connect with this film finally today. In his review, he boils down what he calls the “buried story engine” at work in Planes, Trains & Automobiles. quite succinctly as “not slowly growing friendship or odd-couple hostility (devices a lesser film might have employed), but empathy. It is about understanding how the other guy feels.” I think I’d been processing the film as some of the former—the “slowly growing friendship” even though the friendship is only sort of incidental until the very end and does not really grow slowly; the “odd-couple hostility” makes more sense, and it’s the reason that Neal doesn’t really like Del until the end of the film... if we can even assume that he likes him at that point. The setpieces that constitute this film distract a bit from the point of the film. I mean, it’s entertaining, and I like it, I even feel the sentiment at the end of the movie, and feel sorry for Del when Neal tells him off at the Braidwood Inn, but the change in mood comes so damn close to the end of the film, I think it just didn’t register for me quite right. To be fair, counting the four times so far this week, I’ve probably only seen this movie about half a dozen times.

(Never saw Planes, Trains & Automobiles in the theater. It came out Thanksgiving weekend, 1987. Same day as Three Men and a Baby, which I did see in the theater. Also in theaters that month: Running Man, Fatal Attraction, Hello Again, Baby Boom, Suspect, Like Father, Like Son, Dirty Dancing, The Princess Bride and Flowers in the Attic. Pretty sure I saw all of those in the theater, though a few of them were at a second run theater so they might not all have been during November.) 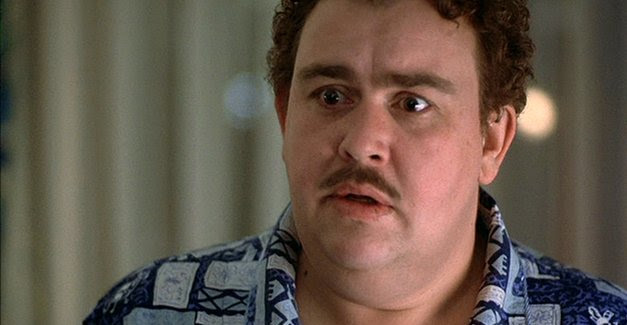 The thing is, the message of this movie—that empathy Roger Ebert refers to—that’s a powerful message, a useful message. It’s the kind of thing Phil Connors probably learned in Punxsutawney. All those other people around you, no matter how annoying they might seem, no matter how much they might be in on all the world’s conspiracies against you—they are still human, just like you. Ebert describes fairly well Del’s reaction to Neal’s tirade at the Braidwood Inn. “Look at [John] Candy’s face,” he writes. “He shows Del as a man hurt and saddened—and not for the first time. Later he remembers how the most important person in his life once told him he was too eager to please, and shouldn’t always try so hard.” The problem is, what’s wrong with being eager to please? What’s wrong with trying hard? Del is a nice guy. He may be a bit of a slob, and he may not quite understand how personal space works, but, as he tells Neal, he’s “the real deal. What you see is what you get.” He shouldn’t be judged by that outward slobbishness, or even by his audacious reading of the clearly pornographic The Canadian Mounted just sitting in the airport.

(Odd aside, both Ebert and at least one other guy—Wade Tatangelo at the Bradenton Herald—seem to think Neal doesn’t know the lyrics to the song he starts on the bus. He’s singing it slowly because no one else is joining in. There’s no reason to think he doesn’t know it. Or that he doesn’t know the theme song to The Flintstones, either, Ebert.)

Inevitably, there are so many people coming into and going out of our lives every day that it’s hard not to judge them shortly and go by shallow observations to do so. But, we should never stop there. Figuring out what makes a person tick—that’s one of the best things in life. And, I’m of a mind that figuring out what makes someone tick, you simply cannot help but like that person.

One night a few years after “Planes, Trains and Automobiles” was released, I came upon John Candy (1950-1994) sitting all by himself in a hotel bar in New York, smoking and drinking, and we talked for a while. We were going to be on the same TV show the next day. He was depressed. People loved him, but he didn’t seem to know that, or it wasn’t enough. He was a sweet guy and nobody had a word to say against him, but he was down on himself. All he wanted to do was make people laugh, but sometimes he tried too hard, and he hated himself for doing that in some of his movies. I thought of Del. There is so much truth in the role that it transforms the whole movie.

That story may be sadder than Del’s talking to himself in the car that last night, or him sitting alone at the train station. It amazes me sometimes how well Roger Ebert can encapsulate what makes a movie (or an actor) work. Don’t get me wrong—I disagree with him sometimes, but his reviews were always well written.

One last bit from his review before I go:

The movies that last, the ones we return to, don’t always have lofty themes or Byzantine complexities. Sometimes they last because they are arrows straight to the heart... Strange, how much poignancy creeps into this comedy, and only becomes stronger while we’re laughing.

Now, he’s right, but he’s also wrong. That empathy thing—it is a lofty theme. Maybe it’s not an obvious theme, a big, “important” theme. But, I think the reason some of the not so obvious movies become classics, stick with us, is because they deal in themes far too lofty to be obvious. Connection with another human being, especially when it means we’ve got to get past out initial impressions—that’s huge. And, this movie really is... great.

Not Groundhog Day great, but great.