if i told you the long version...

Not long into Pieces of April, a few characters go looking for Joy. To be fair, Joy is a person, a woman who is dying, but still... it’s an on-the-nose metaphor.

If you haven’t seen it, and you probably haven’t, picture an independent film circa 2003, a lot of handheld camera and natural lighting. Not a great deal of plot development either. In fact, the titular character’s storyline takes place pretty much in one general location—her apartment building (first her apartment, then neighbors’).

So, first night with this movie, which I only ever saw once, 11 years ago when it was in theaters. I let it play without writing much. I remember liking it when it came out, and critics liked it. Patricia Clarkson, playing the dying mother in the film, got a lot of award nominations. My daughter Saer wasn’t that impressed. She liked it well enough but wanted more. I agree. The film is good here and there. Even the horrible behavior of April’s family on their roadtrip to her place plays like something I’d like to see in a little independent film. On IMDb, some people describe the film like it’s a perfect film about family. I think that the film is severely lacking in content about the biological family at its center... or rather, that family is severely lacking at being a good example of what family is.

What the film does deal with well is the various denizens of April’s apartment building who help her out when her oven doesn’t work. From the grumpy old guy who gets mad that April even woke him to the African American couple who teach April a few things about preparing the Thanksgiving meal. From the ornery guy who lets her use his oven then nitpicks how she uses it to the vegetarian who refuses to help her to the Chinese family who ultimately help her out. These scenes play out far more realistically and far more pleasantly than a lot of the family business. The family arriving outside April’s building only to leave after seeing her boyfriend—a black guy recently bloodied in a fight—to go get food at a restaurant, for example, makes the family into quite horrible people.

Had the movie ended with April’s mother’s arrival at April’s door, leaving the details to our imagination, it would be much better than it is. The ending, though, with the photo-style freeze frames and the unearned happiness—it just doesn’t fit the rest of the film. It’s nice, at least, that many of those apartment building denizens are there along with April and her family. That actually makes for something I like; it’s a theme I’ve written about numerous times in some of my fiction, the construction of a pseudo-family out of friends and acquaintances. Had April’s family never arrived, had she been stuck just with the apartment building folk, that would have been an awesome ending as well. 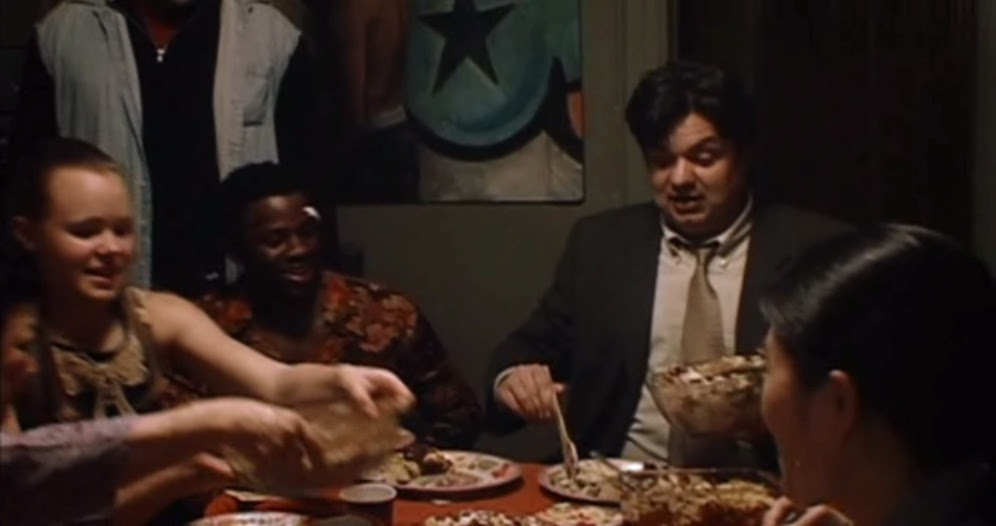 And, don’t even get me started on the racism-baiting plotline with April’s boyfriend and his errand he runs... actually, I’ll just talk about that another day.

For today, I will keep this short. Let the movie settle down inside me, digest a little more.