i think this makes us even

We start Dutch in the parking outside the mansion where the party’s going on. We’re out with the attendants. Then, we rise up over the action and CUT TO inside, we’re still hovering. Like spies, like we shouldn’t be there, and we shouldn’t. The people who should be at a party like this just won’t be watching this movie. And, that’s ok.

As long as we like class division to perpetuate itself... I’m reminded of Levine’s (1992) piece about the “Folklore of Industrial Society.” Popular cinema divided the masses. Levine cites Gans’ (1962) research into the television-viewing habits of 1950s Italian working-class families in Boston’s West End; Gans found that, “Although the television was on constantly, actual viewing was highly selective and was structured to filter out themes inimical to the life of the peer group and to accept those characters and situations that confirmed the group’s values” (p. 1380). We don’t just accept whatever culture throws at us. We are selective, often to reinforce the things we already value. We don’t go to fancy parties like the one at the start of Dutch if that isn’t our usual thing. And, we don’t watch movies about folks from that high-class side of life unless there’s going to be something bringing them down to our level. Doyle, at the start of this film, is a brat, a snooty, self-centered brat. His father and his mother both speak of him almost as if he’s an object they’ve been fighting over instead of a person. Dutch may treat Doyle horribly but at least he seems to recognize that Doyle is a human being. And, of course, the whole point to the movie is that Doyle will eventually recognize someone other than himself as human. Tim at Antagony & Ecstasy takes it slightly further than I would but it’s apt enough to say that Doyle (when we first meet him in the film) “commits physical acts of violence because he literally does not recognise that Dutch has value as a human.” I nitpick because Doyle’s later line about “a solid economy need[ing] hand workers” demonstrates that he does think Dutch has some value, just not in his immediate vicinity.

People [do] not passively accept whatever popular culture [is] thrown their way; they preselec[t] the culture they expos[e] themselves to by learning to decipher reviews and coming attractions, by understanding the propensities of authors, actors, and directors to whose work they have been exposed in the past, and by consulting members of their communities. (p. 1380)

For example, earlier tonight I saw Christopher Nolan’s Interstellar. I like Nolan. His Batman films are inherently flawed but generally speaking, his films work for me quite well. I like Aronofsky, I like Fincher... I’m not even sure I could specifically name a director I don’t like because I probably haven’t paid much attention. I’m not the biggest fan of Woody Allen, but I can appreciate what he does enough to be familiar with him. Similarly, I can appreciate John Hughes, and still rather enjoy some of his films, but some of the 80s sensibilities in his films just don’t hold up very well anymore.

But, Levine... or rather, let’s move on to Butsch (2001), who describes how “working-class immigrants” in late nineteenth century Chicago and New York turned the commercial space of nickelodeons “into social clubs for their own needs” (p. 107). The modern equivalent, since I recently spent a lot of time in this blog writing about horror films, might be the horror film audience, when the theater is full and everyone has high energy and they’re interacting with the movie, yelling “don’t go in there” before the Final Girl enters the darkened house and “I told you so” when she finds her dead friends and their killer in that house.

The audience has a shared culture to it.

Though I’ve got readers outside of the United States, I opted to go with Thanksgiving movies for November, even though there are very few such films. Hell, the two so far are only leading up to Thanksgiving. There are hints of some of the meaning to Thanksgiving... Okay, somewhat. I don’t mean the historical side of Thanksgiving, what it is purported to mean when it’s talked about in elementary school classrooms. I mean the personal meaning. Thanksgiving for my family, for example. It’s a time for a lot of us whose lives might barely pass one another a couple times a year to get together and celebrate... well, to celebrate being together really. I’ve got six sisters, and most years lately, five of them have been at our Thanksgiving dinner. It’s usually at one of their houses—this year it will be at my oldest sister’s place—and their kids will be there, and their kids’ kids. There will generally be a few non-family folk as well, current girlfriends or boyfriends of the unmarried relatives maybe, an associate from work who had nowhere else to be (I think we’ve got one of those this year). It’s like Christmas without the gifts. The meal itself, the gathering, watching some sports (not me) and/or playing some games (definitely me) with family—that’s simply (and quite complicatedly) what it is about. So, the vital heart of both Planes, Trains & Automobiles and Dutch is the trip home for that dinner.

What’s that saying about home? Home is where when you have to be there they have to take you in. Also, the less cynical one: Home is where the heart is. Thanksgiving—the legend—is like this nice little story related to the origins of this country, and celebrating the holiday is like the country is coming home, like for that one day it really is a place where different cultures can sit down to a peaceful meal together and forget all their differences. Similarly, Thanksgiving—the holiday—is like a nice little story about family togetherness that for a little while we pretend is true (the cynical version) or, the story that proves that family is what matters regardless of everything else that goes on in our lives (the not so cynical version).

The two movies left for this month are about the day of Thanksgiving, about preparation and that family gathering, the sparks that come from a family thinking it can get together when it has grown apart. The point to the holiday is sort of both—family can overcome a hell of a lot, but it can also fuel conflict. There’s a thin line between family and fight, I guess. That Planes, Trains & Automobiles and Dutch both deal quite exclusively with the journey to Thanksgiving should demonstrate the importance of the occasion. Drifting back to the likes of Daughton (1996)—cited so often in the first 365 days of this blog—both of these films are masculine quests but without clear, concrete goals. Daughton describes the masculine quest as journeying “outward in order to master and claim some object in the external world” while the feminine quest is “journeying inward in order to encounter and submit to the power of the dark goddess” (p. 140). Daughton cites Rushing (1989) in explaining further:

...the goddess... has been divided by patriarchal influence into light/dark, good/evil, upperworld/netherworld, and eventually, virgin/whore aspects... When the upperworld Goddess actively and consciously accepts her underworld half [or vice versa] (or when the feminine part of the masculine psyche does the same), she is transformed and made whole” (p. 3, 9, cited in Daughton, p. 140)

Add to those dichotomies (though not necessarily strictly because of patriarchy) the likes of Neal Page/Del Griffith or Dutch Dooley/Doyle Standish. The obvious similarities in their names—Del to Neal, Dooley to Doyle—draws an obvious link between the pairs. And, these movies, as these characters journey home, are all about the two men becoming more alike. They can only reach home when they have completed themselves by becoming a little more like their counterparts. Rushing’s (by way of Daughton) dark/light goddess, or Jung’s shadow maybe. There’s probably something Freudian here as well, but with Dutch in particular, it would be difficult to identify Dutch or Doyle specifically with, say, the id, since they both have some outlandish tendencies.

It occurs to me, since the scene just passed on my television, that the scene in which Doyle attacks the security guards and then pulls the pellet gun on them is actually quite pivotal if we do look at Dutch and Doyle in Freudian terms. Dutch talking down Doyle’s violence here effectively subdues Doyle’s id. Of course, since Dutch will end up hitting Doyle’s father later, his own id is apparently free from time to time. 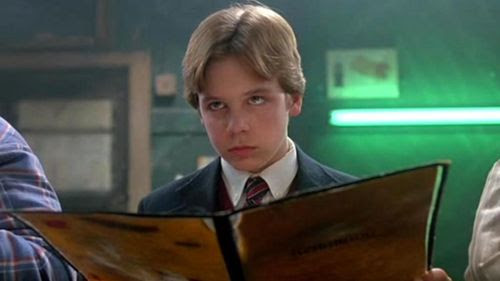