...than to spend a couple days in a car

I find it interesting that Dutch Dooley and Del Griffith are both men used to being on the road. Neal Page and Doyle Standish, on the other hand—they aren’t used to it. For them, the road is a foreign place, somewhere beneath them. Neal’s house isn’t quite as big as the Standish home, but both are definitely a class or two above the likes of Dutch Dooley or Del Griffith.

Speaking of class, the classist overtones in Dutch are quite deliberate. Consider the opening sequence at the fancy party. Not only is it strange that Natalie was invited after she has been divorced out of the club for a while now, but it is strange that she would show up when they did invite her. Really, there is no reason for her to be there in-story; rather, she is there simply so we can get some awkward information dumping out of the way quickly. Natalie is not really high-class, she got knocked up into it. So, there’s hope for Doyle—who Tim at the Antagony & Ecstasy blog says John Hughes “absolutely detests”—because he’s only half slimy. Dutch and Doyle also have that conversation that includes Doyle’s observation that a strong economy needs “hand workers.” That is, laborers like he thinks Dutch is, are necessary; we can’t all be rich or the work wouldn’t get done.

Notably, Dutch is not low class. The big fight that just happened as I’m watching the film tonight, was over the radio and the power windows and seats in the rental car. That Dutch can rent such a car, that he can stop on a whim and buy a big bag of fireworks, hell, that he can take time off work to fly down to Atlanta to pick up Doyle in the first place—these are all signs that Dutch is, well, a bit classier than Ed O’Neill’s other character of the time, Al Bundy. The previously mentioned blogger, Tim, explains John Hughes’ sense of rich and poor:

...the dominant feeling in most of his movies is a noted sympathy for the poor kids, with an unmissable yearning to be one of the rich kids... It’s also worth mentioning that, to Hughes, being one of the “poor kids” meant being, at worst, lower-middle class; even the savagely underprivileged half of Pretty in Pink looks to be living several tax brackets above the poverty line.

My other point I wanted to make tonight is this: Doyle just wants to be loved, physically, or at least proximally. He calls his mother after Dutch abandons him beside the road, but he hangs up without saying anything to her. Similarly, he calls his father after Dutch abandons their trip later, but hangs up after only barely speaking to his father’s lover. Doyle doesn’t really want long-distance help from either of his parents. He really just needs someone to be nearby, to not leave him at a faraway prep school. Dutch may call him “worthless” but at least he does it to his face. Maybe, since this is a product of Hollywood, Dutch should have just hugged the classist bullshit out of the boy in the first act, pull a Good Will Hunting and hug away all his troubles.

Hughes does deal in simplicity. 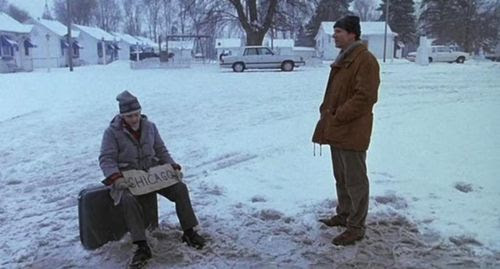