a predilection for drink, for song, and for the occasional wench

I never got to the second. Yesterday, I mean. I quoted some Alexander Hamilton, then got to ranting and rambling about a topic with a political bent--far, one might argue, from Blackbeard's Ghost. And, in particular, I said, "First, there's that line about seeing desolation and ruin everywhere." But, I never had a second to pair with that first. And, that provides me a mild disappointment.

Before I move on to my final thoughts regarding the links between Blackbeard's Ghost and the formation of my identity as a film aficionado and as a human (because, I suppose, at times, the two things must be separated), I must have at last a second. And, it is this:

Hamilton, near the end of the passage I quoted, says, "Say not, we have suffered also, and thence withhold your compassion." You know, your all lives matter crowd, your--and, here, I will raise the ire of some for sure--folks who blame antifa for the violence in Charlottesvilke as if a crowd of white supremacists is not inherently racist, inclined to the incitement of violent attitudes if not actions, and inherently destructive of society itself. (To be fair, antifa includes a lot of self-proclaimed anarchists, and there's not much support for society there, but the backward bend to blame one and forgive the other, particularly by our President, is twisted up in this lack of compassion Hamilton references. As if the removal of your confederate statuary is in any way, comparable to the pains and the legacy of slavery, and the defense thereof represented in and by that statuary. Now, you'll be asking yourself with some impatience, where is my compassion for the assholes on the side of bigotry? And, to be fair, while it amuses me to refer to them there as assholes, I do have compassion for them. I feel for southerners brought up with a pride for being descended from men who enslaved other human begins and tore a country in half to sustain that practice. I feel for southerners brought up with a pride for a battle flag that represents rebellion, but who could hardly manage any rebellion beyond maybe stashing a bunch of guns and putting far too much energy into protecting their second amendment rights, when they are wasting their first amendment right on perpetuating racism and hate... And, I know I'm building a straw man here. I admit it. But, I get it. You grow up around racism, of course, you will be inclined to perpetuate it. You grow up hearing about how great the South was for standing up for itself, of course you will think it worth still standing up for today, no matter those beliefs.

I have made a habit of idealizing 60s radicals myself. As both a history major and a communication major, I found ways to write about them, to defend them, even at their worst. Of course I would, at present, support antifa over the shadow of rebellion represented by the KKK and other white supremacists. The latter has latched onto the wrong part of what the confederacy was, and what it represented, in the American Civil War. The former, on the other hand, has almost naively positioned itself as a bastion of freedom in the face of hate.

Through the use of force, of course. But, that is just basic Americanism. If at first you don't succeed, try try again and put a lot more force into it. Everything answers to the expenditure of more effort. That is a fundamental piece of the the American Dream, a fundamental piece of what we think success is. And, however you take the morality of Blackbeard's Ghost, it certainly fits as much. Even if in a deliberately nontraditional fashion.

I've already pointed out that, however briefly, Blackbeard's Ghost approximates some portion of what would otherwise be a sports film. A specific genre with specific tropes and themes. But, Blackbeard's Ghost makes no effort to stick with that genre. It expends no energy in the direction of its tropes except in that brief moment that Blackbeard offers to train Coach Walker's team.

Imagine that film. Steve gets the young men of the Godolphin track team to recite the spell Kree kruh vergo gebba kalto kree and Blackbeard trains them alongside Steve, and there's a couple montages of them learning some pirate-like moves that eventually affect how they throw the javelin or the discus, or put the shot, how they run, how they perform the high jump. Not Blackbeard cheating on their behalf as in the film as it is, but rather the young men as a handful of characters in their own right, learning to perform better with the unconventional assistance of a formerly bloodthirsty and still alcoholic pirate, who just happens to be a ghost. And, of course Coach Purvis (Michael Conrad) and his football players would conspire to disrupt the track team's training. And, the action would become quite silly, and farcical, as the track team, with newfound confidence, would fight back. And, maybe the climax would be, instead of the Broxton Relays or the gambling at Silky's Place, a competition between the track team and the football team, and the track team would prevail specifically because of their unconventional training...

Actually, I kind of want to see that movie, now.

But, Blackbeard's Ghost is not that movie. And, it is not really a movie about political radicals, then or now. Instead, it is a family-friendly comedy about an alcoholic (in a funny way) pirate (in a funny way) who helps a down-on-his-luck track coach help some old ladies to not be evicted from their home. (I imagine that, in that other version of the film, there would also be better extrapolation of the budding relationship between Steve and Jo Anne.)

What Blackbeard's Ghost is is an exemplary piece of comedy built around the talents of Dean Jones and, even more so, Peter Ustinov. Seriously. yeah, my sister may have joked that this film taught her to drink, but seriously, what does a child see in this version of Blackbeard? He drinks. He emotes openly and freely. He takes it personal when things don't go his way. He acts on impulse, and those actions don't fit within societal standards; he cheats and he connives. And, well before it is appropriate, he is willing to resort to violence. I see this as a kid and it's also the late Cold War period, actions movies invoke large-scale violence as microcosm of some potential cataclysm, and the good film (well, one of them) is this one. Go figure that I idealize those who deliberately act outside the bounds of rules. Go figure that I appreciate a drink now and then. Go figure that my impulse, quite often, is to speak ill before I compliment. To jest before taking things seriously. That is what Blackbeard's Ghost instilled in me... I suspect as much, anyway. 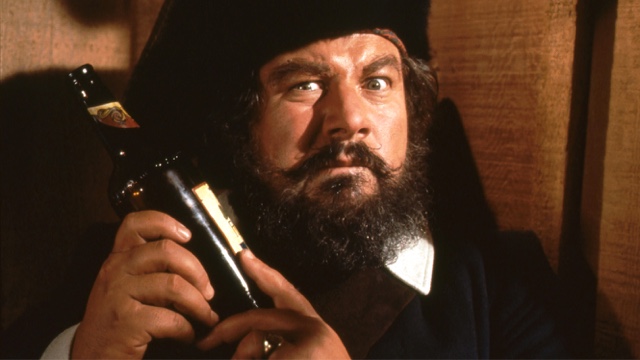 Or the occasional wench. Haven't done many of those, either.

Maybe I took the wrong lessons from Blackbeard.