i talk so much sometimes

It's interesting that, as a kid, the big mystery films I watched a lot were Murder by Death (watching it now) and The Private Eyes (watching it sometime in the coming weeks, months, years? Who knows how long this "month" will take). Comedies that parody and/or satirize older detective films and stories that I had less access to. My views of detective stories in film would forever be tainted by these movies. 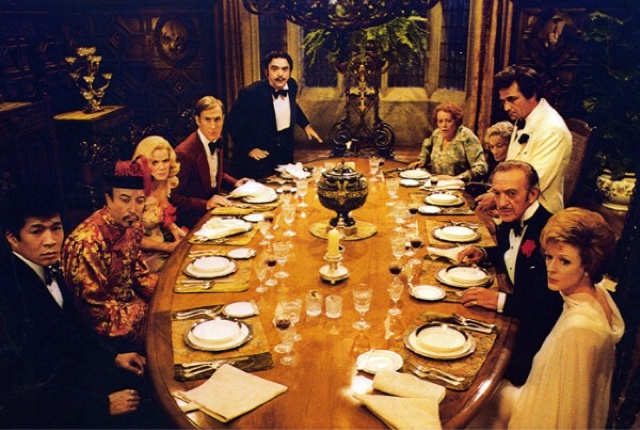 And, I sit here watching (and being distracted by cats and people, but mostly just watching).

Dick and Dora Charleston (David Niven and Maggie Smith) based on Nick and Nora Charles, Sidney Wang (Peter Sellers) based on Charlie Chan, Sam Diamond (Peter Falk) based on Sam Spade, Milo Perrier (James Coco) based on Hercule Poirot (and reportedly, though I've never seen it, there's a deleted scene that had Sherlock Holmes and Dr. Watson arriving as well)

--and each brings a distinct tone to their interactions with the others...

And, of course those interactions don't fit together nicely, and that is where this film finds a lot of its comedy. As Mr. Wang puts it: "Most amusing. Bickering detective's like making giant lamb stew; everything goes to pot."