that she can contribute

There's an echo--or whatever the opposite of an echo is--of Joe Versus the Volcano in the much briefer opening of Snowball Express. Baxter doesn't have a terminal diagnosis, of course. Rather, his great uncle (who he apparently didn't even know) died, and this is Baxter's new lease on life. Get out of the "smudge pot" of the city, the office, and go run a hotel in Colorado.

I just learned this is based on a book called Chateau Bon Vivant--a true story apparently--about newlyweds Frankie and Johnny O'Rear who "arm themselves with a four-hundred-page volume entitled Theories of Hotel Management, two cases of bourbon... and a Vermont beagle" and set about a "twelve-year comedy of errors" running a ski-lodge in Quebec" (Back Cover Description, near as I can tell). Some details have been changed, of course. Frankie is Susan. Johnny is still Johnny but he left the office instead of the navy. Instead of two cases of bourbon, they've got two kids. And, instead of a beagle, they've got a Saint Bernard...

But, I want to back up a bit. To the office.

Christopher Borelli, writing for the Tampa Bay Times in 2011, starts his exploration of "office culture" with an evocative line: "Linda Schroyer got pinched. But then, everyone got pinched. All the women, anyway." Talking about office culture in the early 70s, referencing Mad Men and the realities it echoes. In that brief office bit that starts Snowball Express we see a great little microcosm of that office culture of the time--a lot of white men working on typewriters, one big computer, a water cooler, a time clock, and that one woman... who Baxter draws attention to in his little quitting speech. He awards his stapler to "that man who has logged more hours at the water cooler and managed to survive, Jim Cullen, Mr. Water Cooler himself." He awards his scissors to "George Ball 'cause he demonstrated exceptional courage and ingenuity at last year's Christmas Party when he cut off Mr. Carruthers' tie." Then, he calls out Beverly Boxer for "the outstanding achievement award, my staple remover, goes to that person who has demonstrated that she can contribute the most to office morale. Miss Boxer, I think I can say without fear of contradiction that you have the greatest legs in this office, if not on the whole 40th floor. They have been a distraction. They have caused mad hours wasted. They've made life here bearable." She is, of course, wearing a minidress that shows off those legs. 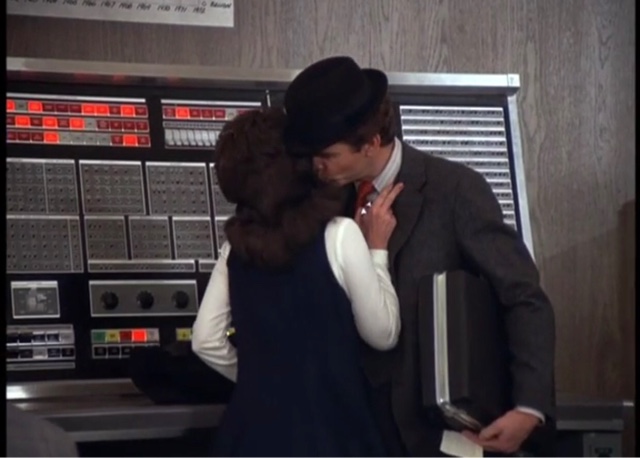 And, this is mere moments before we know that Baxter is married with children. But, of course, 1972, this is normal office behavior. "She would always get pinched, patted. Then she would laugh. Everyone would laugh," Borelli continues.

Nobody thought much of it; or rather, nobody said much. She wore a ponytail and a miniskirt--because she wanted to, she said, because she was in her 20s and that's what lawyers in the Statehouse [or, here, men in an insurance office] expected, and because she was looking for a husband.

"It was all a great big game," she said. "And when I got pinched, I even felt like I was getting a compliment. Isn't that funny?"

By today's standards, not really. But, that wasn't today. And, neither is Snowball Express. But, as I said with Blackbeard's Ghost, then and now are all wrapped up together in my head. That is the point of this current exercise here at the Groundhog Day Project, after all. For example, what about this scene with flirty Naomi Voight (Joanna Phillips) and the more nebbish Miss Ogelvie (Alice Backes) next to her on the sleigh with Baxter? Why this juxtaposition of women? Except for more inherent, if not deliberate, commentary on the roles of women at the time. The women of Snowball Express are seven:

Beverly Boxer - has some job at Indemnity and Casualty, has great legs. We don't get to know anything more about her. Oh, and she kisses Baxter on his cheek after he awards her his staple remover.

Chris - Baxter's daughter, serving little purpose except to be the other child--Richard gets the more useful moments, and Chris' best moments rely on a) her inexperience with alcohol while trying to serve drinks and b) being the barely registering (except for a classic case of pairing the spares) object of Wally's (Michael McGreevey) affection, which just leaves her as desperately crying for Wally to be saved when he falls over the side of the cliff.

Miss Wigginton (Mary Wickes) - Ridgeway's assistant, who serves little purpose story wise but to let the audience know Ridgeway isn't to be trusted... except, Susan voices that concern more directly. In the end, she does turn against Ridgeway, but then it's really Richard who manages the deus ex machina solution to all the Baxters' problems. She's there simply to tell us what a) we would have no other way of knowing any more than Baxter would and b) to explain what it means. Like a secretary for the audience. Richard gets a handshake, a hug and a "good work, son." Wigginton gets nothing, except maybe she's going to lose her job.

Naomi - who is introduced flirting with Baxter, who asks Susan about him later (not realizing she's his wife), and Susan says of her, "You get much nicer to Naomi Tightpants, she might stay through the spring." She, like Beverly Boxer in the office, serves as a distraction in the film. In a different era, Baxter might actually be tempted toward an affair. But, this isn't that kind of film.

Miss Ogilvie - A counter to Naomi... But why? Couldn't Naomi have her room invaded by Stoutheart? Is it funny to see that Baxter, with a good wife back at the hotel, is sitting beside these two very different women? It's as if the film only knows a couple roles for women. They are wives, they are sexual objects, or they are something far from it. There are no in betweens. Not that register in this story, anyway. But, this story, like Blackbeard's Ghost revolves around something more stereotypically masculine, climaxing around a sports competition (track there, a snowmobile race here) that doesn't quite get the win the protagonist wants. Also...

Miss Grable - who might as well have been Miss Ogilvie again, when she serves as Wally's first ski student, serving really as a setup for Wally's fall, Baxter going to save him, the donkey engine mishap getting underway, and the Grand Imperial getting a hole burst in its side. She's just a trigger, not a character.

Did these limited roles matter at the time? As Borelli says, "Nobody thought much of it; or rather, nobody said much." This is after second ave feminism has had a big effect in America, in the office, in the home. And, maybe it's almost a positive that the film offers up the wife and the flirt and the nebbish woman. There should be more to a realistic portrayal of women, but at least they are not all exactly the same.

I could also ask, did I notice?

But, it doesn't matter what I noticed. I mean, consciously. It matters that it was there. That I watched this many times, and so many other male-centric films. The patriarchy writ into the fabric of cinema.