by fair means or foul

Since Blackbeard's Ghost is a kid's film, we won't hear details about the death of Edward Teach--still fighting after his throat was cut, he was felled by at least 5 gunshots and 20 sword cuts--or how he deliberately ran one of his own ships aground so the shares of the loot among the rest of his men would be bigger. Or how he would stick lit fuses in his hat to scare the crap out of people with the cloud of smoke around his head. Instead, we get a pirate who is funny, and an alcoholic. My sister Brooke joked last night that she may have learned to drink from this movie. 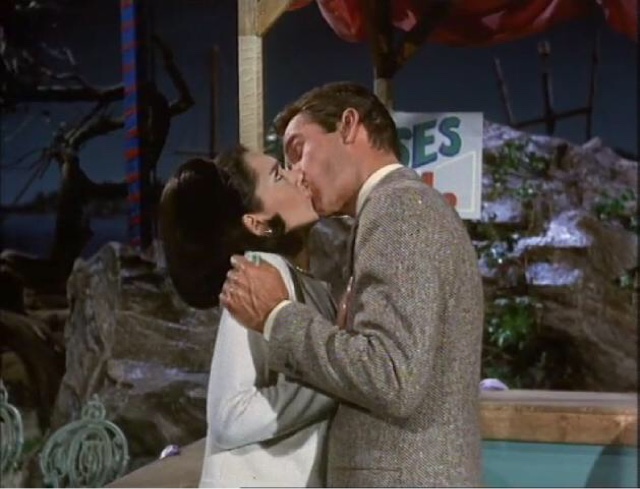 We also get a kissing booth. And, if this were the romantic comedy it occasionally seems to think it is, that kissing booth offers up the ultimate meet-cute with Steve meeting Jo Anne (Suzanne Pleshette) by kissing her. Incorrectly figuring because she's taking money near the kissing booth that she is working the booth. It's 1968, second-wave feminism in full swing, so after Steve proceeds to also kiss the girl working the booth, Jo Anne removes her Executive Committee pin and offers the $5 special, because she may be a college professor but she's not above kissing a stranger twice to make a point. (To be fair, the point to feminism is she can make up her own mind, but next to the rest of the film, it's an odd moment in retrospect because nowhere else does Jo Anne feel so competitive with other women (though, again, to be fair, in the rest of the film, there are really only old women around--the cheerleaders don't really count), nor does the film rely on its romantic comedy angles as much as its... family-friendly-alcoholic-pirate-farce angles.

The great thing about this film--whether it taught kids who grew up watching it to drink or not--is that in defanging Blackbeard, turning him from a guy who relied on people fearing him on sight to someone cuddly, even when he's talking about keel-hauling one of his wives to raise the spirits of his men, or he's pointing out where on his bed he stabbed the Portuguese trader from which he stole it. Think of the moral relativism implicit in this setup. And, that's before we get to the use of cheating later in the film--the end justifies the means and all that. On the one hand, that's classic American-ism. As long as you're in the right (or think you are) you can use whatever force you like to get things done. But, if you're in the wrong (or the powers that be have decided that you are) damn you for trying to do anything but sit down and shut up--

(And, who thought this month would lean into politics so quickly? I mean, I haven't even gotten to the year of my birth yet in this deconstruction.)

Meanwhile, Blackbeard says, "Do you think I like this mortal life of yours? There doesn't seem to be any honest joy anymore. Your modern life of yours seems to have got small. Everything's puckered up." In 1968 (from the perspective of a guy who died in 1718), you've got that usual adult nostalgia. Things were always better before. The world has gone to shit. Young people are to blame. We need our monuments and memories to remember when things were great. Make America Great Again is just the latest iteration of the same line of bullshit.

(Doublechecking when Blackbeard died, I realize that it was 300 years ago this month that Blackbeard was first recorded as pirate, captain of the Revenge.)

This idea that the world, that society was better in the past and they have ruined it. And it barely matters who they are. White supremacists. Bleeding heart liberals. The KKK. Antifa. Radical Islamic Terrorists. Republicans. Democrats. "People often attribute the out-group's perceived failings to their essence," Fiske (2002) writes. And, the Internet draws each group further into its corner, seeing whatever out-group as, yes, essentially flawed, essentially guilty, essentially wrong, broken and breaking, and the world cannot be wide enough for both them and us. Whoever we are. Silky Seymour is just a stand-in for whoever we're currently blaming for society's ills. In 1968, Silky's threats and gun-wielding muscle are like stand-ins for violent radical liberals protesting the war in Vietnam... Or since this movie deals with college instructors and (to a lesser degree, but with plenty of screen time) students, maybe we're on the side of those radicals. Blackbeard as hero of the New Left. Damn the rules, blow up a lab or a police closet or a statue and march, with arms if you must, to fight the powers that be (Silky Seymour and his muscle, running little old ladies out of their home).

Of course, I'm supposed to be dealing in my experience with the film, not necessarily the film itself, but aren't the two one and the same? I mean, take this film as a metaphor for the New Left, cheating and beating to get their way, and is it any wonder that I have oft idealized the New Left of the 1960s, had papers published about them, and have enough books on the subject to cover more than two of the shelves at the other end of this room I'm sitting in now, watching Blackbeard's Ghost one more time.

The things I take from the film now--were they always there, and I only recognize them now? Does it matter? The evolution of one is the evolution of the other.