I want to see something new tonight. 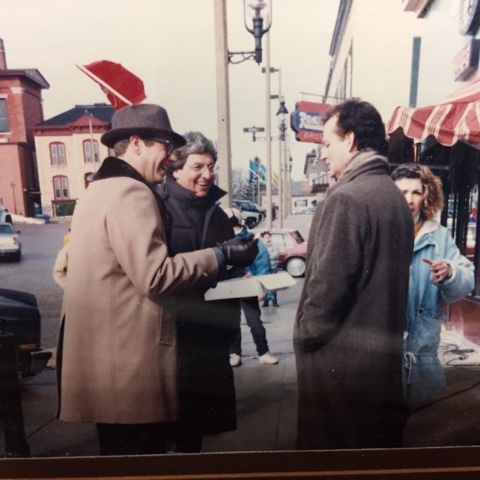 In the meantime, I sit here and recite a lot of the lines as they go. Not spending every day with this movie--like I did in Phase One of this blog--my timing is off with some lines, but mostly I've still got it.

You know one detail from Groundhog Day: The Musical (which I have yet to see because I can't make it to New York too readily, but I listen to the soundtrack plenty) that I love that differs from the film? When Buster announced that the groundhog said, "I definitely see a shadow" and he proclaims "Six more weeks of winter", in the film, the crowd just boos. The people on stage even have signs to egg them on: BLIZZARD, SLEET, 6 MORE WEEKS OF WINTER. The crowd in the musical has a slightly different take. Sure, they boo, but then, almost immediately, they scream yay, because they're such cheerful folk they can't really be sad about the weather. And, really, why be sad about the weather? ... Unless you've got a hurricane like the people in Texas and Louisiana this week, or the awful heat we've got in Southern California, with a good size fire in the hills near here to go with it. But, you can't control the weather. It may be bad--and you can certainly prepare for that--or it may be good--and you can prepare for that, too--but it's out of your hands. So, you know, roll with it, let it be, and control the things you can control. "I am the one thing I can control," sings Aaron Burr in Hamilton: An American Musical (which I did finally get to see this week, as it's currently in LA), "I am inimitable. I am an original." On the other hand, there's Gus in the Groundhog Day musical: "Nobody cares what I say. Nobody cares what I do. What's the point of bothering if no one else is bothered. I was born in this town and I'm gonna die here too."

And, to quote Gus again, "And I think I had a point there but the point is it don't matter 'cause it's pointless having points anyway..."

My rambling and my recitation are getting in each other's way. And, my head is in a strange place. School got started this week, and I got behind on some stuff... And, Phil just lamented over his day in the Virgin Islands, and I'm distracted all over again, thinking about days I've had that are worth repeating, worth perfecting.

(Or, taking the About Time methodology, maybe every day is worth repeating, worth perfecting. Like, today. What would I do if this was my repeating day? Get up an have a real breakfast for one. Get out of the house earlier; despite the smoke in the air outside, I wish some days for much more to do outdoors, and people to do those things with. I've got friends with whom I do stuff sometimes, but we've all been busy lately. D&D Sundays are still a thing, but nothing else for a few weeks. I, at the same time, want to do more, and am not the one to suggest it. It's sad, and pathetic.

And, missing the point.

Days worth getting right the first time through.

Way back in day 52 - if you only had one day to live (still one of my favorite entries), my "reason to repeat a day forever" (which is how I used to end every entry) was something I still wish I could manage every day--"to have strength, to trust myself to make moves without overthinking them, to be better, to be happy."

I write that and Phil is getting the "Date Night" sequence going. He says to Rita, "I'm just interested in you. You know, what do you want? What do you like? What do you think about? What kind of men are you interested in? What do you do for fun?" and he claims, "I'm just trying to talk like normal people talk. Isn't this how they talk?" Rita say it's "close." And, I wonder. Because much of the time I feel like I have no idea how normal people talk. I have two dating apps on my phone but I avoid them. Outside of my immediate family, the folks I play D&D with on Sundays, and my students, I don't really interact with anyone in person. Little things like whoever's behind the box office counter at the local movie theater, or Starbucks, but not much else. And it just occurred to me that Bill Murray was 41 when they filmed Groundhog Day. That's how old I am. Of course, Bill Murray isn't Phil Connors. And, I'm not Bill Murray. But, I may be Phil Connors... Or I wish I were. He may be a self-centered ass, but he manages to do things with his life (even if for the wrong reasons).

I know who I want to get to know... "What do you think about?" "What kind of men are you interested in?" And all that. But, I also know the answers. And, I'm not some immature little schoolboy, too stupid to move the fuck on. Still, it's nice to be interested. Like, I'm exercising a mental muscle that hasn't been exercised in a while. In the previously mentioned day 52 entry, I quoted Siddhartha about fasting. Siddhartha explains to Kamaswami:

It is of great value, sir. If a man has nothing to eat, fasting is the most intelligent thing he can do. If, for instance, Siddhartha had not learned ho to fast, he would have had to seek some kind of work today, either with you, or elsewhere, for hunger would have driven him. But as it is, Siddhartha can wait calmly. He is not impatient, he is not in need, he can ward off hunger for a long time and laugh at it. Therefore, fasting is useful, sir.

In response, I argued:

I think this rings true for fasting from anything. If we can do without, then we can avoid hungering for... well, anything. Experience starvation and food might not hold the sway it once did. Go without companionship and maybe you can sustain loneliness...

And, I love where this took me. I continued:

Or maybe that comparison doesn't hold up. There's a distinct difference between the physical urge, be it for food, be it for physical contact, a hug, be it for an adrenalin rush, be it for sex, and the more fundamental urge of needing someone to be close to, not physically necessarily but just as intimately. Phil Connors jokes about how he's (not) going to touch Rita when she falls asleep, but really, he's not. He doesn't need to. The simple fact of her presence is more important and more vital to him, especially then, than any baser urge. His sense of humor still just can't leave it alone.

And, while the cessation of such urges is nice, is amazing, is everything... Well, not everything. Sometimes the urges themselves are enough to remind you that you're alive, that you are still here on this earth, full of piss and vinegar and blood and a heart beating away to the rhythm of the world. And, if you're not completely bereft of feeling for your own wants, you do things that are fun, you consume things that are good, you live, and if you're lucky, most of the time it just doesn't matter if you win, if you get everything you want, not because all the good looking girls will still go out with the guys from Camp Mohawk cause they've got all the money, but because in this moment, in this place, you're happy, you're occupied, and the missing pieces can wait.

Like putting together a puzzle. Sure, it's nice to finish it. But, it's also nice to put each piece in its place. One piece next to another, interlocking, interweaving, pieces of one whole, without which that whole would never be.

This month in this blog, my plan is to watch a bunch of movies that I used to watch when I was a kid, the kind of movies I quote in casual conversation, not necessarily as a reference but because the dialogue is so ingrained within me that it emerges as if it is my own thought. And, I mean that. They're all pieces of me, pieces of this whole that I'm still construction each and every day. Today, I watched the season finale of Killjoys, worked on the movie list for this next month (whittling down a list of 78 movies to a more manageable 29 (1 per day) that I still might not get to all of them because I love to linger when a thought catches my attention), worked on pawns and stat cards for tomorrow's D&D game, took my daughter to an audition, drew a battle map while watching some MST3K, and now I'm watching Groundhog Day and Phil's about to do his speech to Rita while she sleeps, and today I'm feeling it. It's not cheesy. There have been days when it's been cheesy. This isn't one.

My point is, each of these pieces of today make today today. And each today makes me me. Flaws and all. Brilliance and all.

And, yeah, every day is worth repeating. To fix mistakes, big and small. To try new angles, new ideas, do new things, meet new people. To appreciate the details we missed in passing the time before.

And, I look up to the screen and the Phil Sign Girl has no friend beside her.

Was I distracted? Or attracted? I think I actively seek the tangent.

And, I think I just got my new thing.

The nurse's name. One of the few mysteries left in this movie. Regardless of the video quality, her little name tag is just too small and her movement blurs it. But, I noticed that she's got a bigger tag below it. I'd never really looked at that. Between the two, I think I've got her name. A. BROADBENT, RN.

(I checked the cast and crew on IMDb since, the traffic cop Phil talks to on the highway was named for the transportation captain George DiLeonardi. But, there don't seem to be any Broadbents involved. A google search, though, and I find a piece I've never seen. I get distracted all over again. Jane Broadbent wrote a piece in 2013 called "Commentary on Parker: Groundhog Day and Optimism." Color me intrigued. I google Parker's piece and then realize that Broadbent's abstract describes it as "assess[ing] the deliverables and relevance of qualitative accounting research" and I do not want to continue down this path. If I was still in grad school, maybe. But, not now. For now...)

No matter what happens tomorrow or for the rest of my life, I'm happy now. Because, one mystery solved.