who are you talking to?

Still 1975. (Still not born yet.) Disney again. Except I was actually thinking about how different these childhood films are from the ones I watch now. Yesterday, for example, I watched mother! in the theater and I watched Adventures of the Wilderness Family at home. Today in the theater I watched Beach Rats and I'm watching The Apple Dumpling Gang now at home. Very different movies today. Very different movies today. I mean, you've got a big metaphor for human interaction with the universe, for religion, for male-female relations, for the cult of personality, sacrifice and self-sacrifice, and you've got a family running off to live in the wilderness and finding that some animals are nice and some are vicious... Which, really, taken simplistically, the themes could be much the same. But, Adventures of the Wilderness Family is just so innocent about everything. While mother! includes sex and violence and apocalyptic destruction as well as cannibalism. Meanwhile, Beach Rats is an indie film about a young Brooklyn stoner and his friends. Oh, and he's a closeted homosexual who goes out at night to have sex with men he meets online. But, The Apple Dumpling Gang, which may be about criminals and a gambler, is, like Wilderness Family just so innocent about everything. Even its racism and sexism.

I've come a long way. But, I figure it's all about the subtext. This film favors the criminals. It's funny, but it's also reminding the audience (i.e. me as a kid) that criminals are just regular people who took a different path; they aren't inherently bad people. Donavan (Bill Bixby) is a gambler and a scoundrel, but this film is all about him being humanized. 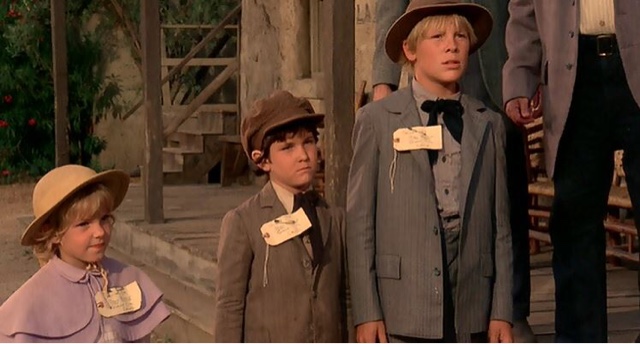 And, I thought I might get into a rant about mother!--that film almost tempted me back to YouTube yesterday--but then Conway and Knotts were on screen again, and the kids got into that minecar and Celia said "I'm gonna have an accident" and I forgot what I was going to say. (I may have to actually to a YouTube thing in a couple days.)

Ebert, by the way, calls this movie an "assembly line plo[t] about the adventures of squeaky-clean kids" but in the right moment--

(after a long day and little sleep, because you stayed up watching American Vandal on Netflix until 3am, got up to see a movie in the morning, binged some Fear the Walking Dead while prepping tomorrow's D&D game, then your daughter directed one of the plays in this semester's 24-Hour Theater Festival at the high school up the street, and you didn't even get to The Apple Dumpling Gang until it's well after 10pm, you're already tired, you're hungry, and the expected rants about other films wandered out of your head hours ago)

--this kind of wholesome entertainment...

I must interrupt this thought because Donavan just said "three deuces beats aces over eights" and I don't understand. I thought they were playing poker. The win makes no sense. I mean, in a metaphorical, this-is-a-western kind of way, aces over eights is the worst hand you can have, but in actual, practical poker, it's beating three 2s every time. [Somehow, I have always assumed is was aces over eights, meaning three aces and two eights--a full House. But, apparently the famous dead man's hand is supposed to be just two aces and two eights and a hole card.]

I must interrupt my attempt at humor to make a quick point about this film's misogyny. It's actually a pretty easy argument to make that Dusty (Susan Clark) is good with the kids and Donavan not good with them not because she's a woman and he's a man but because she's a nice person who cares about others and he's a selfish bastard who only ended up with these kids because he was desperate for cash in the middle of a poker game. Then again, Donavan's the asshole he is because he's a man, I suppose. (The film makes a regular thing of countering his selfishness with challenges from and comparisons to Sheriff Homer McCoy (Harry Morgan).) ... Then there's this from that same paranthetical sheriff: "Dusty's a fine specimen of womanhood! I seen her get caught in a. Cloudburst once and I wanna tell you!" And, I think I understand. He saw her in the rain and... Either he could see through her clothes and saw that she's not the more "masculine" coach driver that she presents as, or just the romanticism and shine of water falling upon her brought out all her beauty. The Sheriff suggests Donavan marry Dusty for the sake of the kids and the entire film's plot is sexist, but oh so nice about it. "No two people ever got married for a more honorable or worthy cause," he tells Donavan.

(Sidenote: it's interesting that the titular gang really isn't Amos and Theodore (Conway and Knotts, respectively) but the kids; it's the kids who keep asking for apple dumplings. Amos and Theodore actually call themselves the Hash Knife Gang. I can't remember if they've taken on the titular name in the sequel, but that sequel wasn't as successful anyway. And, I didn't watch it so many times as a kid.)