what makes it happen

A note before I begin: tonight's dinner is burritos and there are some chips and dip. This is the kind of meal we used to serve when we'd have people over to watch movies. Of course, there's no actual meat in the burritos anymore, as I'm a vegetarian now. But, it's an echo of the stuff we'd make when folks were coming over to watch a movie like this one... Most of the people coming over to watch movies happened in the latter half of the 80s and into the 90s, I'm pretty sure. But, this "month" is bundling all of it together.

(Secondary note: apparently, I’ve been misnumbering the blog days for the last couple weeks and only just noticed. Today is Day 1141 even though I called yesterday 1040 on Twitter and Facebook.)

Now, on to Adventures of the Wilderness Family one last time. 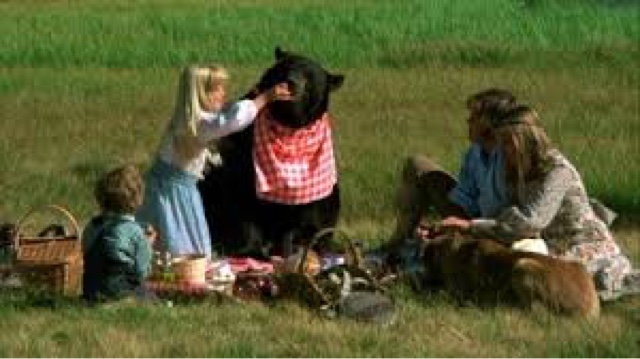 One scene that undermines some of what comes later in Adventures of the Wilderness Family comes just after the family meets Boomer (the mountain man who wanders into the film, names some animals to make later scenes easier to follow, then wanders right back out of the film). Pat asks, "What would you do if you were out in the wilderness and you had a headache and no medicine?" Jenny answers, "You should boil the bark from an aspen tree... Because that's how they make aspirins, right?" Skip asks about a mark on a tree, Toby guesses a woodpecker, Skip tells him it was a bear marking its territory." Coupled with the earlier scene of the kids doing some book learning in the cabin, this scene suggests that this family is prepared, or preparing, for life in the wilderness. The panic at Jenny's fever later is like someone in a script meeting (though I don't think this film necessarily had such a thing) forgot all about the earlier scene and decided the climax with Three Toes would be more exciting if Skip were out of the picture. On the one hand, the Robinsons are prepared and can handle this--to be fair, they would stick it out for several years (and a recasting of Jenny for the two sequels)--but on the other hand, there won't be much drama when the bear attacks if Skip is there...

Except, Skip isn't all that useful before. The whole family works together to build the bigger cabin. Pat has better... I was going to say luck, but really it's skill. The mother has better skill with a a gun than Skip does. The family dog, Crust fights off the cougar, not Skip. Crust fights off the nice bear, not Skip. It's like the movie wants to build itself on top of second wave feminism but also knows that the audience will inherently see a more dangerous situation if it's just the mother and children (and the dog) in the cabin when Three Toes attacks, the father off failing at canoeing but still managing to get to the doctor (or at least to a working radio; the doctor actually arrives separately). Pat, perhaps because she is skeptical about all this, is the better wilderness parent. She gets the kids to do school work, because they might not always live out there and shouldn't grow up ignorant. She is half of that outdoorsy learning scene described above. She is good with a gun, and even attacks Three Toes with a big stick when he corners Jenny by the river.

If this movie were made today, I could imagine Skip not being a part of it at all... But, that is problematic in itself; that it's hard even for a bleeding heart liberal like me to imagine a film about a strong wife and her supportive husband heading off into the wilderness. It's the patriarchy, and Americanism, and Christianity ingrained in me since childhood. A single mother is easy to work with. But, a mother and wife with a submissive husband? The closest you get to that in popular culture is something like Roseanne, except Dan Conner was not submissive. He just wasn't the center of the show like Roseanne was. Instead, I think of a current FX show, You're the Worst, Lindsay (Kether Donohue) as the put upon wife with her weak-willed husband Paul (Allan McLeod), except as the series goes on, she's the bad guy in that relationship, and as of the new season, Paul is out of the picture. But, that's what I picture with American pop culture when it comes to a strong wife and a weak husband. Actually, that terminology is the problem. That one must be strong, one weak. But, I grew up Christian. Back when I was watching often these movies I'm writing about this month, I was also going to church every Saturday and attending private school Monday to Friday, with daily Bible lessons. I was constantly being told at church, at school, at home, and in popular culture, that the man is the leader of the household, the woman is his supporter, his "helpmeet" as God puts it in Genesis. By 1975, it was okay for the mother to be better with a gun, for the mother to be the one who saves her kids' lives, to be the one who ultimately decides if the family remains in the wilderness. But, Skip is still in charge, even as he says he'll stay only if she wants to. That final moment by the lake actually embodies the problem. It's playing lip service to her agency but one can imagine another argument coming if she actually suggested they head back to Los Angeles. It's easy to imagine that this only plays as it is because it is scripted. Of course, she's going to opt for staying; otherwise, what is the point of the film at all? Had one of the children died, running back to Los Angeles would be the option; this would be a cautionary tale about stepping outside of civilization. This isn't that kind of movie. This is a celebration of the wilderness, a celebration of the wilderness family--just listen to that cheesy title song. Pat can not opt to leave the wilderness. But, the film can pretend she can.

Again, this film is all about family, like Snowball Express. And, whether it's about the wilderness or not, this film certainly suggests that we'd all be just fine if we rejected the big city and pollution and jobs. It won't make every problem go away. But, it would help.