none of this woulda happened

(So... Altering the plan a bit. This "month" is going to take far longer than a calendar month anyway, so I looked back at the longer list of films I had made before narrowing it down for this exercise in deconstruction, because, my Star Wars VHS tapes still didn't arrive. Options were, skip past it, jump ahead to Heaven Can Wait, or... I looked at the larger list and found Across the Great Divide for 1976. Fits the pattern and I might start adding some other movies from the longer list back into this. This could take a while.

But anyway, today... tonight, actually; it's a late start because my Thursdays are busy anyway and I was hoping the mail would make Star Wars possible tonight. In fact, as I'm typing this little paranthetical, I'm still watching Critical Role. Their episodes end when their episodes end. So, it's near 11pm and I don't know when the movie will begin.

The weird thing about watching Across the Great Divide is that I barely remember it, but I remember never wanting to watch it. One of those movies I thought was boring, but it was a nice family friendly film that came up often. Robert Logan again, star of Adventures of the Wilderness Family, but immediately there is something very different going on with him. A bunch of guys try to kill him while he's out riding. (And, some corny song plays briefly, and I'm wondering what tone this is going for.)

We're also going to have Heather Rattray, who wasn't in the first Wilderness Family but will take over the role of Jenny for the second and third installments, and George "Buck" Flower, who plays Boomer in all three Wilderness Family films. And, it looks like the same guy--Stewart Raffil--wrote Adventure of the Wilderness Family, Across the Great Divide, and The Sea Gypsies, all of which star Robert Logan. (Rattray is also in The Sea Gypsies.) Rattray plays Holly, the older of two kids here who will end up traveling with Logan's Zachariah Coop, who seems to be a drifter and a criminal... But I really wish it felt more like these guys chasing him actually wanted him dead; the music is too... happy.

Zachariah: "Look, there's no denying it, Missy. Circumstances have forced me to behave less than truthful, but it's circumstances and not an evil nature that's to blame."

Now, Holly calls that "hogwash" but I'm thinking, today, this movie is going to prove him right, so what were my conservative parents doing showing this to us kids? Hell, what were the 70s doing with so many family films about so many bad people? It's like--and, actually, this makes sense--the 60s broke film just like that decade broke so much else in America.

My parents weren't much older than a lot of the hippies; they just latched onto Christian religion instead of counterculture ideals. I'd almost like to deconstruct how they got there, but I don't actually know enough about them. My father grew up in a rural part of Pennsylvania, lots of kids in a big house. He was a troublemaker, and he went into the navy as a teen. Fortunately for him, and for my own existence I suppose, he was in there too late for the Korean War and too early for Vietnam. My mother grew up in rural South Dakota (and she had a raccoon as a pet, so films like Wilderness Family probably reminded her of her childhood). She's always contended that she was a good girl when she was a teenager. If I remember right, they met because of church. Married and had their first four kids in the 60s, three of us in the 70s. It's like a puzzle... Not that I usually like Whiggish history, but taking me, here, right now, as the result. This film--watching it anyway--is just one of the cinematic stepping stones to who I am right now. My parents, and whatever motivation they had to not only liking this movie but recording it onto a VHS tape and showing it to their kids... I of course, would follow suit many years later and show lots of movies to my own kids--never this movie, but lots of others. So, I think about why I showed my kids the movies I showed them. Always because I liked the movies, of course, like I was trying to turn my kids into smaller versions of me. That's parenting, right? Put as much of yourself as you can into these smaller people and hope for the best when the future comes. Or something like that. Part of why I don't hold my religious upbringing against my parents much; what choice did they have, if they believed in that stuff, but to try to get me to believe in it, too?

Same goes for movies. One generation sees the previous generation's movies, but the context has changed. One filmmaker grows up in another time and makes movies echoing those from his childhood. What else are they going to make, really? You make copies of, or response to, the things you already know. The experience of watching film isn't that different.

(This movie just threw a cougar off a cliff into some water. Legal standards for that sort of thing have certainly changed a lot.)

And, it's not just generations, but years. I watch a film from my childhood, and it's like an old friend (or at least an old acquaintance) who has come to visit after being away a long time. Sure, it seems like the same person, and you two still get along, but something is different. You've changed a bit. They've changed a bit. The world has moved forward a bit. The context has changed. This movie is about two orphans and a widower. They're finding new context for themselves with each other.

And, I think that was supposed to be profound, but it's late. 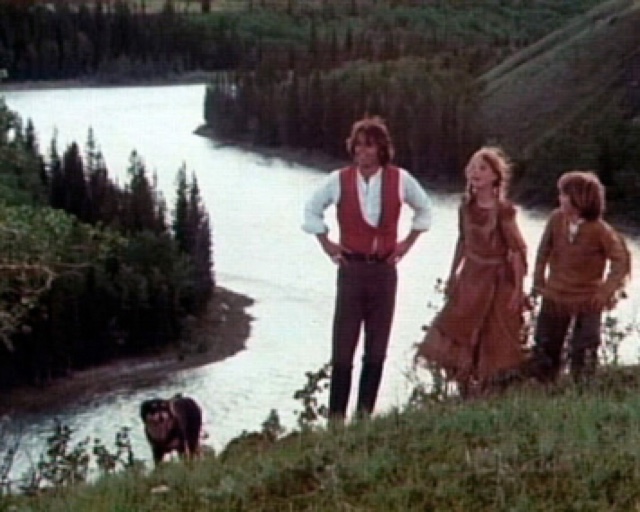