and the air is clear

But, then there’s that music... However dated some of Snowball Express' content may feel, it's got a brilliant effortlessness to it.

Like the bit with the snow falling from the eaves that leads to a snowball fight. The Baxters seem more like an actual family than four actors working. And some pleasant music plays.

(The same pleasant music works as a nice clue for the audience that Baxter won't be seriously injured skiing Nightmare Alley.) 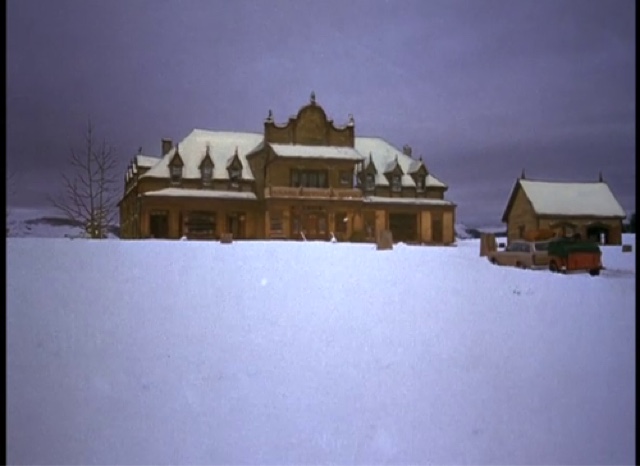 That same effortlessness affects the plot in a... Not a negative way, but a horribly, cutely convenient way. The Baxters open up the rundown Grand Imperial. The water heater explodes. So they can't get a rope tow engine. Instead, they get the donkey engine. They can't get any guests, but then Wally inadvertently sets off an avalanche that blocks a passing train, and they've got guests. But then the donkey engine crashes through the hotel and the guests leave. Johnny and Jesse race in the Silver Hill Winter-National and come really close to winning, but don't. (Meanwhile, Susan has threatened to leave if he goes through with racing, but sure enough, she's there after he loses.) Ridgeway comes to finally buy the property and a last minute reprieve saves the Baxters from failure. It's all quite convenient.

But, it plays less like filmmakers manipulating the audience--as a more recent film with the same plot points might--and more like the filmmakers were all just having a good time, like the whole movie is just a nice jazz riff that they barely realized they needed to resolve in the end.

That shouldn't be a good thing. But, the comedic beats, especially from Dean Jones (Johnny) and Harry Morgan (Jesse) but Nancy Olson (Sue), Johnny Whitaker (Richard), Kathleen Cody (Chris) and Michael McGreevey (Wally) have some good timing and delivery as well.

Mellow even in the face of life-threatening accidents on the ski slopes. Just like the introduction of Naomi "Tightpants" Voight; in a different film, Johnny would be tempted toward an affair and that would be one more bump in the road. But, here, she's such a brief distraction, an interlude in the tune that is the film. Every little problem is given basically the same wait as any other. There is always a solution because this isn't a dramatic film about the struggle to run a ski lodge. It's a harmless, effortless, pleasant family comedy. Even in the end, the convenience of old property contracts bests Ridgeway's attempts to buy the property, and Ridgeway is just going to meet up with Johnny the next day to offer him a loan. Even the cutthroat banker is nice when it comes down to it.

The only notably bad person in the whole film is the kid who makes fun of Richard's apron. And, he's just a kid.

I imagine my usual mellowness. So many stresses from teaching and life, but I play a game of D&D on Sunday, watch a new movie Friday morning (and maybe a movie or two sometime during the rest of the week, not to mention movies for this blog), and I can compartmentalize the stresses away. I am going to try to imagine the music from Snowball Express when life is going crazy. Like everything is just a jazz song... and occasionally it drifts into the blues. But it all just flows.