you gotta have respect for things

Adventures of the Wilderness Family is an interesting case, potentially. Watched it a lot as a kid. And, I mean a lot. My sister Bobbie recently informed me that this was the only movie our parents would let us watch on Saturday mornings; that was the sabbath for us.

(And, that I grew up attending church regularly and going to a church-owned private school will become important below.)

I remember hating it, or at least really disliking it. I guess, if I hated it, I probably would not have sat there and watched it every time.

(I also remember associating the opening shot of this film--showing the Bonaventure Hotel being in downtown Los Angeles under construction--with the sitcom It's a Living, which was set in a restaurant at its top, but that's just an arbitrary link, however permanently fixed it is in my head.)

Officially, I thought it was boring. But, I can't have been completely against it to have watched it so often, and to have sat through its sequels more than a few times. The thing is, I imagine, assuming the acting is good and the script itself holds up, that I might actually like this movie today. It has been years since I've watched it, but my recent enjoyment of, for example, Captain Fantastic and The Glass Castle would suggest that I harbor an appreciation for folks stepping away from regular society to live a little more off-the-grid.

(Another movie I used to dread watching as a kid--Jeremiah Johnson, a film I wish I'd been able to fit into my month of Westerns (June 2015)--I have come to rather like as I've gotten older.) 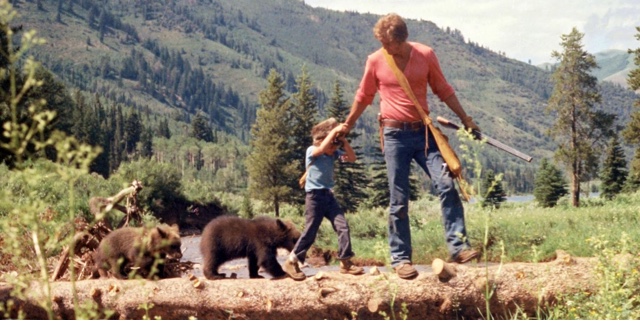 The opening is closer to Joe Versus the Volcano than Snowball Express, but straight drama. Skip (Robert Logan) working in construction, Los Angeles covered in smog. Meanwhile, his daughter Jenny (Hollye Holmes) is sick, some vague affliction with her lungs. And Skip wants to get away, try a better life.

Four minutes and we're in the mountains. The Robinsons are flown into the middle of nowhere, 25 miles from the nearest people--a ranger station.

Immediately, I am struck by just how willing the kids are. (That the wife goes along with the husband's craziness is par for the course; it's the 70s and this is a family film.) Then the action plays for silliness right away--a raccoon in the stove (not unlike Blackbeard's Ghost) and a bear that eats the family's food as they watch from the roof of their tiny cabin, in the rain. With a different soundtrack, this moment would be pure comedy.

And then the cheesy song kicks in over the chopping wood montage and... Wow.

(Plus, an apparent hole in the Internet: I cannot find the lyrics to that thing.)

Toby (Ham Larsen) is adorable, trying to chop down a tree, pulling the raccoon into his sleeping bag, calling the dog a chicken for not fetching the bird his father just shot. He didn't do much acting outside this series, one other movie and a few tv episodes (including one of Little House on the Prairie).

Random rockslide kills the mother bear and now the family has two bear cubs. Because, that is what happens when you live in the wilderness. Duh.

Cougar Cubs follow the kids home because a) the kids are allowed to wander far from the cabin on their own and b) the family needed even more animals, I guess. Throw in some slow motion running with the kids and the cougars and, I'm not entirely sure at this point what the movie wants. And the father tells the kids "You don't take baby animals out of the forest like that." He literally just took some. Different situation--mother bear was dead--but still...

Returning the cubs, Skip gets attacked by their mother, the dog fights the cougar and, it's like the film can't decide if nature is supposed to be dangerous or not. The cheesy song from before suggests it's all happy freedom time but this... This feels like what we might call today a teachable moment. But, Skip literally tells the kids to go play with the bears as Pat (Susan Damante) dresses his wounds. But, yeah, they "learned a valuable lesson."

And, I'm not sure Skip's and Pat's marital problems (barely touched on as he came up with the big idea to flee the city) went away just because they picked up stakes and moved into a cabin. (Also, I'm not sure if we're supposed to side with Skip or Pat on this one.)

Ultimately, I'm not sure what the movie is trying to be exactly. Is this supposed to make families want to skip town and head for the hills? Or is this a reminder about the dangers of the wild? Frank R. Martin, writing for People in 1979, suggests that this film's success--made for just $405,000, it earned over $62 million--spawned more than just its sequels; it was the reason for Across the Great Divide (which was on my longer list for this month but got left behind) and for The Sea Gypsies (which I don't think I have ever seen). Robert Logan starred in all of these. And, apparently, he wasn't that much different from his character Skip... And maybe I'll write some about that tomorrow. For now, I'm wondering what the point of Boomer (George Flower) was. He shows up, eats a meal with the Robinsons, tells them names for the local animals, then wanders off again. Like Jenny saying grace before an earlier meal, it's a lingering notion of the order we like to think the world has. God gave everything a place, man named those things, and ultimately, this family will tame their little corner of the wilderness. I guess. Local black bear turns out to be tame because of the guy who used to live there, because reasons.

And there's not much structure to this story, either. Which isn't necessarily a bad thing.

Jenny gets sick, somewhat arbitrarily, after the bad bear attacks. And, the message of the film gets even more muddled. Sure, move out into the wilderness. (But, definitely bring this family's dog because he can fight anything and not even be injured.) Sure, don't put much effort into avoiding local predators. But, as soon as your kid gets a fever, go running back to civilization because you are an ill-prepared fool who forgot to bother having any first-aid knowledge, or figuring out what was actually wrong with your daughter before you fled the smog of the city. It's almost like the film has nothing to say at all. But, that's something, too. Like, you know, fuck it. Kid's sick. Run. Kid's sick again. Run again. Doesn't matter to where or from where. Just matters that you do something. That's the 70s, right? Doesn't matter what you do, as long as you do something.

Oh, and do it with your family. And a dog. And maybe some bear cubs.

And, know first aid. And, know how to handle a fucking canoe.