a long time on a crooked road

It's not just the desk lamp that foreshadows what's to come, of course. When Joe cleans out his desk, he has a copy of Robinson Crusoe, a copy of Romeo and Juliet and a copy of The Odyssey. Isolation, doomed love, and a life-changing journey. This is Joe Versus the Volcano… and this is life itself.

Also, Note the repeated lines of dialogue. Not just Joe's line about having seen DeDe and Patricia before. Waturi's phone conversation, the oft repeated "I'm not arguing that with you." Angelica's "I have no response to that." Neither Waturi or DeDe are prepared to really converse, lest they have too much information, too much insight, too much instigation to change their lives. They don’t want to expand. Don't want to grow. Watusi says, "Nobody feels good. After childhood, it's a fact of life."

The last recap post was day 1065 - socially acceptable insanity and I should do another. I’ll make it quick. I’ve got things to say. Recap posts may seem like they're something to do when there's nothing else to do, but they actually take a lot of work. So, here's your recap. July 2nd, Groundhog Day, day 1066 - it would take me a year. Then there was the month that was supposed to be dystopian films but I just couldn’t do it, because I wanted something more pleasant (read: less political, though that eventually wasn’t working either)…

Well, it will be soon. (Not that Joe Versus the Volcano is, in any way, a bad movie. Robert J. Elisberg at Huffington Post says he "discovered that life is divided into two groups - those who utterly hate "Joe vs. the Volcano" and those who absolutely, unequivocally love it. And it's about 90-10 against.") 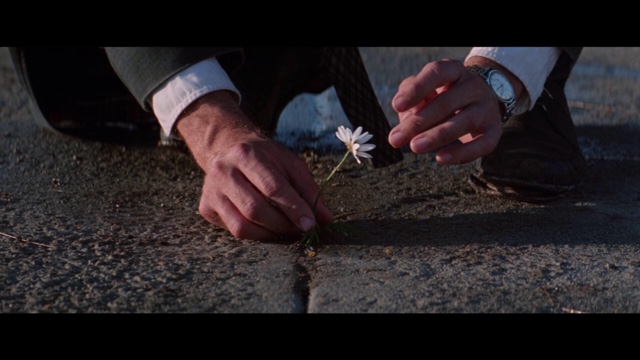 What was it I said above? Isolation, doomed love, and a life-changing journey—this is life itself. Also, in the modern day, perhaps Waturi is right as well, nobody feels good. Too much of the modern world interferes with our natural rhythms, our natural tendencies. Would Joe have ever hugged that dog and its owner had he not just gotten his terminal diagnosis? Of course not. He's closed down, shut in, beaten into submission by the day-to-day, by fluorescent lights, supervisors, trudging (literally) from his car to the factory every morning... And he finds that crushed daisy and stands it up and so much of the story to come is encapsulated in that shot. Joe is the daisy, Joe is the savior of that daisy...

And, I'm catching odd details I didn't notice before. The fake arm Joe plays with is not a prosthetic but a fake severed arm with a jagged wound to its upper end. Mr. Waturi... Joe shortens it to Mr. Turi, which approximates the sound of mystery but, the actual name also approximates watery. The guy playing Frank (the other coworker) has a fantastic open-mouthed stare.

Sidenote: Joe worked as a fireman until 8 years ago. This would mean that Joe (Tom Hanks) was a fireman at the same time that Robbie (Tom Hanks) in Mazes and Monsters was having his mental breakdown. Nice timing. Like this is what happened to Robbie after, like the only job he could hold down was that one at American Panascope. And, after a while under those fluorescent lights, he was no longer Pardieu. There were no monsters to see but for the machines.

(Or, maybe this is game Pardieu plays to take a break from the fantasy.)

The mariachi band at The Spanish Rose play "On the Street Where You Live" from My Fair Lady (but with Spanish lyrics). This is, of course, a song about how much life can change in an instant, by falling in love. And, notably, it includes the line, "And my heart went on a journey to the moon." And, what is My Fair Lady about but a man molding a woman into a new version of herself. Here we have three virtually identical women, versions of the same as far as Joe's life is concerned, but he is the only being molded, and partly by each of them.

Waturi holds (artificial) testicles in his hands as he sits at his desk. Graynamore, after barging into Joe's apartment, proceeds to open a can of, and then eat some of Joe's nuts. [He May have brought them himself, but same difference.]

Joe's apartment has a damaged section of wall in the shape of that same crooked path that led to the factory (and was the logo of the company, and which matches the path up the side of Big Woo). It reminds me of the constant fire in Hazel's house in Synecdoche, New York.

Joe buys an umbrella... It's red and white. I think of the Umbrella Corporation, and the notion of a corporation, any corporation leading the world to its end. We all need some steamer trunks for the coming zombie apocalypse... Or are we already in the middle of the zombie apocalypse? We just haven't noticed yet because we're the zombies, working 9 to 5, owing our souls to the company store, watching reality on television and on our phones rather than living it. Or, as Leah Schnelbach puts it, over at tor.com, "Joe has been selling his life without questioning the transaction (the way most of us do), and only now that he sees an endpoint does he realize how much more he was worth." Schnelbach is talking about when Joe quits his job, and she buries the important detail there--that we are all selling our lives without questioning that transaction. Schnelbach smartly connects that initial selling to the bigger sale Joe makes with Graynamore. "He says 'All right I'll do it,' in the tone of a man agreeing to run to the store for more beat, Schnelbach writes.

...but really, what choice does he have? If we want to look at this scene positively, he's trading 6 months of life with no money and a painless death for a few weeks of extreme money, adventure, and a death that will be terrifying and extremely painful, but also intentional. Of course, we can also see this is a horrifyingly bleak business transaction, in which Joe is literally selling his life now that he's gotten a better offer than $300 a week.

Of course, Patricia will later talk about how she's ashamed that she had a price. Her father offered her the yacht if she took Joe on this trip.

I read that Angelica's car's license plates, front and back, are different, one saying BAAD GIRL, one saying GOOD GIRL, but I couldn't tell on my tv.

For a few minutes, I got stuck on why Patricia calls Joe Felix. A reference to Felix the Cat perhaps, except she doesn't know about all the tricks he's got in those steamer trunks. Patrick Loughlin, in a blog over at mindspring.com, suggests that it has nothing to do with the name but rather the simple fact that Patricia chooses not to call him Joe. As Patricia puts it, "I am calling you Felix because I do what I want." Loughlin argues that Patricia "desires to be free to do whatever she feels like doing, but she later feels guilty about how she treated Joe and apologizes." He uses this as an example of Kierkegaard's ethical stage...

Insert: footage of me looking up what that is (and wondering why Kierkegaard never came up when I was watching Groundhog Day every day), as the lightning bolt that matches the path to and logo of American Panascope and the damaged wall in Joe's apartment and the path up Big Woo strikes the Tweedle Dee and sinks it.

Meanwhile, the Woo mask at the big feast looks like the American Panascope factory.

A quick perusal of Kierkegaard and, yeah, those stages would have (and might still) come in handy when talking about Groundhog Day. But, I'm not seeing much connection here. Joe never has the aesthetic stage... Or if he does, it's long before the film begins. And, the drudgery of his job is like the worst version of the ethical stage. Still, maybe the specificity of Felix doesn't matter so much as Patricia's initial refusal to treat this employee of her father's as his own person.

And, that sidetrack got me to the end of the movie. Alas, I feel like there's more to say. Joe Versus the Volcano could takes days and days to talk about. But, tomorrow is Groundhog Day. And, the next month should be interesting...

Schnelbach, L. (2017, February 20). The unlikely philosophy of Joe Versus the Volcano. Tor.com. Retrieved from https://www.tor.com/2017/02/20/the-unlikely-philosophy-of-joe-versus-the-volcano/