see you next tuesday

I don't really want to rehash the inherent sexism in a family film made in the 70s--that's just par for the course, another sign of the times that were. At some point, you must take a film on its own terms, let it have its timely biases and its timely treatments of men, of women, of people of color, of varying ethnicities. What then can you take from The Apple Dumpling Gang?

It's an entertaining film. It's funny. It's got heart. It's plot is simple and easy to understand, and Donavan and Dusty ending up a couple is a good ending to the story as offered. That Amos and Theodore ride off with the happy couple and their kids is icing on the cake.

But, what really stands out watching The Apple Dumpling Gang after so many years--and I have seen it in the intervening years, probably most recently in the last 10 to 15 years--is just how well put together it's plot is. (Except for one detail.) The Hash Knife Gang--Amos and Theodore--and their antics are barely connected to the plot for much of the film. Sure, the film opens with them attempting to ambush Donavan as he arrives in Quake City. Sure, they try to rob him again later when he's won $500. Sure, they are there to direct the kids to the Commodore Mine, which leads to the kids finding the giant nugget that drives the rest of the story. And, sure, Donavan (and then the kids, too) is there to almost catch them stealing the ladder to get into the bank. And, sure, they're trying to get into the bank to steal the very nugget the kids have found. But, every one of these things is more coincidence than actual plotting.

Dusty cares about other people and has to look after her alcoholic gambler father (plus she seems to do all the actual work for the Butterfly Stagecoach Line). So, she has an interest in the three kids she just delivered into town. This puts her in contact with Donavan because he's a gambler and had a chance at money right when he needed some to pick up what he thought was just a package. Meanwhile, Amos and Theodore are trying to be outlaws, bandits, thieves. But, they are no good at it. (It is mentioned briefly (just over half an hour into the film.) by Dusty that they used to be part of the Stillwell Gang. Amos accidentally shot Stillwell. This will be important later. This is also part of the one detail that isn't all that well put together.) This and the kids' antics makes for all the humor. Well, the Sheriff has some great lines, too.

(Including today's title, which probably went over the heads of anyone who saw this movie back then; since it was surely good wholesome families seeing the film, of course, and good wholesome families don't go for that sort of thing... Imagine me rolling my eyes now, except I surely didn't notice it before. Not until two nights ago. I probably just thought that guy in the barbershop got his shave every Tuesday.

The Sheriff also, as I've already mentioned, mentions seeing Dusty "caught in a cloudburst" (i.e. with her shirt wet from the rain).)

Wintle comes back after Donavan has convinced Dusty to marry him, for the sake of the kids having a mother and Donavan having access to their money and having the kids off his hands. McCoy is literally about to bang his gavel and make it official that the newlyweds will legally be the kids' parents, and Wintle walks into the courtroom. Coincidence. Off screen, the kids learn the Wintle just wants their gold, so they go to Amos and Theodore to get them to steal the gold nugget, leaving nothing to interest Wintle, and the kids will get to stay with Donavan and Dusty.

Then, the not-so-well-put-together bit comes into play. Sure, Dusty has mentioned the Stillwell Gang and Amos' having shot Stillwell, but for the Stillwell Gang to really matter in this plot, they should have been introduced earlier, or Amos and Theodore should have talked about them. That these two think they can be a gang, taking the whole situation in mind, probably comes from actual success they might have had with the Stillwell Gang. That is, the Stillwell gang may have managed some success despite having bumbling fools like Amos and Theodore as members. (Because this is a comedy, the Stillwell Gang isn't all that great at what they do, either, of course.) But, something else has to get in the way of Amos and Theodore really succeeding. I mean, why suddenly would they be any good at this? So, the Stillwell Gang is introduced (not counting Dusty's brief mention 34 minutes in) an hour and four minutes into the film. This is too late really to be introducing characters that will affect the plot in such a big way. In fact, that Amos and Theodore take old, sweating dynamite into the bank in the first place could easily have resulted in the same explosion and the same failure to secure the nugget, and we wouldn't need Stillwell. But, any movie with scoundrels in it--Amos and Theodore, but also Donavan--needs bigger scoundrels. Blackbeard's Ghost needed Silky Seymour to be actively trying to kick old women out onto the street, and for his men to pulls guns on people because that is visual scoundrelry, something concretely villainous while even reminders of Blackbeard's horribleness is mostly in the abstract; in the present, he's a nuisance and a drunk, but he never really does much that is that bad (cheating at the track meet and the roulette table don't count because that is in service of the greater good). Here, we need Stillwell, who is marked with a limp and a leg brace 1) as Amos' accidental victim (hence it makes their conflict in the bank personal) and 2) as an evil cripple. Physical disability as obvious sign of his less obvious moral disability.

Had Amos and Theodore talked about Stillwell early on, or had we seen Stillwell earlier, the plotting here would be perfect. (I imagine this story as drama, the Stillwell Gang introduced at the beginning of the film, and we keep going back to them, witnessing their awfulness, and the tension builds because we know that, at some point in act three, they will find Amos and Theodore again.) The barely tangentially linked antics of Amos and Theodore work as the fool(s) that distract from an otherwise quite simple story that wouldn't require such screentime. But then, they get pulled into the central story more overtly when the kids invite them to steal their nugget (something Amos and Theodore have already failed to do once). Their inevitable failure--Stillwell Gang involved or not--means Donavan and Dusty must stay together because they want to, not because the kids have money and Dusty is willing to be the abandoned wife. It's practically Shakespearean, really. The fools are exactly the twist in the plot that drives it all to the happy ending. It a classic story, that ending would include their wedding, but the cleverness here is that they have already married, legally. In the end, though, with father-in-law and three kids and two outlaws in tow, that is when Donavan and Dusty are really married. Classic romantic comedy trick, question tradition along the way only to uphold it in the end. (And it's not a surprising response, as it were, to the decade before its release.) The film upholds the family structure, "normal" gender roles, and gives Amos and Theodore a way out of town (not that the Sheriff would really have hung them). 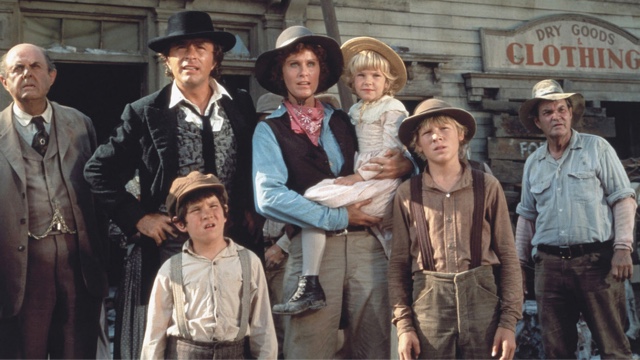