that loves and keeps us free

This is 1975, but as I've said before cinematic decades bleed into one another. This is more a tail-end 60s film, a family-friendly extension of the counterculture. Skip Robinson is like a shoulda-been hippie who turned establishment, maybe because he got Pat pregnant and he needed work, because that's how the man says it's supposed to be. Skip tells the pilot of the plane that drops them off, "We thought a lot more than twice" about bringing the family out there. The film hasn't demonstrated that. It's offered an abrupt burst of I-need-to-escape-the-city after a brief glimpse of some pollution over Los Angeles. And, for a resident of Los Angeles, that urge to run away would be relatable, sure. For Robert Logan, who plays Skip, it fits right in with his actual life. 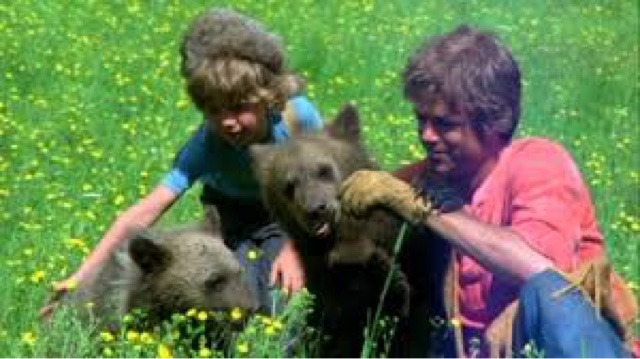 His first big role seems to be on 77 Sunset Strip; he appeared in 53 episodes. But, what I'm interested in is his role as Jericho Jones on Daniel Boone. Introduced in the first season finale--"The Courtship of Jericho Jones", Logan's character wanted to marry the daughter of a Native American chief--he would appear in 11 episodes in season two. According to Frank Martin writing for People, March 12, 1979, Logan left that show over a script dispute and

embarked on a series of Jack London-like adventures. He crewed on a record-setting sail from L.A. To Tahiti. After a stint as a yacht broker (and a divorce from his wife of three years, modern Susan Henning) he set off for Europe and happened into a part in David Wolper's The Bridge at Remagen, then shooting in Czechoslovakia. He was nearly fired for ruining a battle scene by smuggling a girlfriend into the middle of the combat. When the movie crew was evacuated because of the 1968 Soviet Invasion, Logan stayed behind to film a documentary, The Prague Spring, for which he was detained and then expelled.

Over the next few years Logan produced an unsuccessful documentary on American drug smugglers jailed in Spain and lived for a while on a houseboat on the Seine with actor Sterling Hayden. Logan returned to the U.S. In 1973 to start a screenwriting career. After meeting the writer of the original Wilderness Family... He became an actor by chance.

From 1975 to 1981, he would star in 7 films (3 about the Robinsons) set in the wilderness. He did his own stunts for the Wilderness Family series, and received a scar from one of the cougars. The outdoors seems to be his thing. "Sometimes I've been in the Arctic or Europe," he tells Martin,

and I've said, "By God, I wish I could share this moment with somebody special," he says. "Usually, though, there is nobody special. The fulfillment of life is the voyage," he philosophizes. "It's not being there that's important, but getting there.

If anything, this encapsulates what is supposed to be the point to this first Wilderness Family. That's why there's no obvious plot from start to finish, but a series of vignettes about this family that moved out into the wilderness. (The sequels would continue with the vignettes and echo some of those that had come before; The Further Adventures of the Wilderness Family replaces Jenny's arbitrary fever with Pat's pneumonia and the bear Three Toes with a wolf called Scarface; Mountain Family Robinson offers up something a little different with a mining claim on the Robinson's land and Pat's mother back in Los Angeles being sick, so it's Pat's turn to run back to civilization because of someone else's illness.) This is more a scrapbook structure, snapshots of an idyllic life but with the occasional reminder that even away from civilization, life is not always perfect. Structurally, Skip's rush back to civilization to get a doctor for Jenny feels both unnecessary and antithetical to the point of the story. Sure, your kid might still get sick out in the wilderness, but the Robinsons have managed so far, and it's the attack by Three Toes that really matters as the force that might drive them out of the wilderness. Jenny could just have easily been in shock from nearly getting mauled, sans the fever, and Skip could have been around for the final climax... Except, Pat gets to fend off Three Toes instead, something like a shadow of second wave feminism (similar to her having shot, offscreen, two birds for dinner earlier)... Except, even in that, if not for the intervention of the other bear, Samson, the way the film presents it, Pat never would have the opportunity for the kill shot. Meanwhile, Jenny is the one who gets lost and cornered by wolves. Jenny is the one who gets corned by Three Toes initially. Jenny is the one who creates the situation that calls into question Skip's big manly trip into the wilderness. If there were more depth to any of this action, more commentary in the dialogue or even the presentation, the film might be problematic in offering up a masculine fantasy, living off the land, fighting off wild animals, and undermining it through the use of the daughter and the wife. Toby is only ever in danger when he's with Jenny or with Pat.

For its time, of course, the film is harmless. A simple story about a family, who as realize about the wilderness, in the words of Jenny, "There are some bad things, but there's a lot more good things... Like having the best backyard in the whole world, and being together." This isn't a cautionary tale like, say, Into the Wild, nor is it really an aspirational story like, say, Into the Wild. It's just wholesome family fun, with dangerous animals.