when we reach civilization

Let's get a couple things out of the way: 1) the gambling at the end of Across the Great Divide, unless we are supposed to assume Zachariah is cheating, is bullshit. It's cheap and convenient stacking of cards so both have good cars and Zachariah wins. It's the kind of thing a lot of movies do, actually. Nevermind the way poker actually works, the way players actually bet, the way you're not going to be betting horses after like one hand; 2) the song that plays as the men try to kill Zachariah at the beginning of the film is awful; so are many of the obviously-written-for-the-film songs that play and; 3) even worse, there is a moment when they've been at the native camp for a bit where the kids run in slow motion with some cougars and that same stupid running-with-animals music from Adventures of the Wilderness Family plays and for a moment, it's like one movie is the other, and not in a good way, because I think this movie is actually better.

Some moments are just plain silly, and story is fairly simplistic and stereotypical, but there's a reason that a coupla kids bringing out a scoundrel's heart is a plot that's been in many a movie; it works. And, it's believable... Or we want it to be. Given the timing, mid 70s, this is basically reminding the audience that all a scoundrel--be he a beatnik or a hippie or even a soldier--needs is some kids (and a wife, but this movie skips that a little bit) to make him a good, productive member of society. (It occurs to me that, given the more liberal attitudes about women in the workplace, a film like Baby Boom a decade later is the same thing but about women who've dropped out of the wholesome life they're supposed to be living. Just get her a baby and she'll learn that she wanted one all along, damn the women's libbers and their propaganda.) 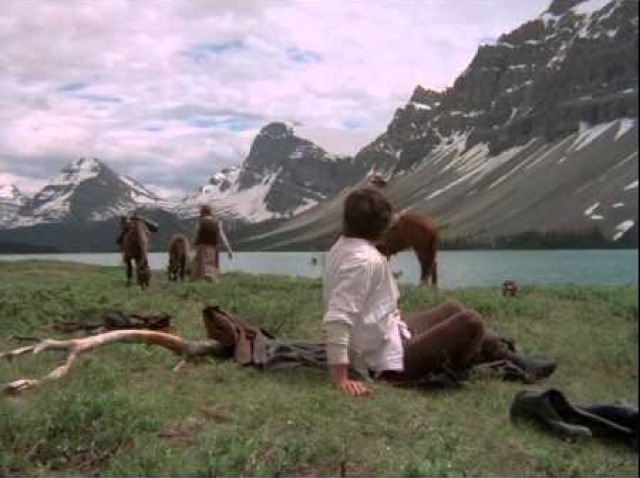 Maybe that's the thing that had all these wilderness movies coming out in the 70s. Williams and Hammond (2006) point out:

The strategy proved so successful that the major studios copied it with releases "emphasizing the family/adventure elements" of films with rural or wilderness settings... (p. 270)

One reviewer of this film on IMDb also pointed out--and I confirmed the timing with a little googling--that John Denver has his career peak in this same time period. I wonder now... Or rather, I'm piecing together various old thoughts into something coherent... I'm theorizing, I guess, that the popularity of these films at this time was like the scoundrel thing. One the one hand, hippies had a point; civilized society, cities, urban and suburban environments were not good enough, and the urge back to nature, to the wilderness could be commended, just as long as it wasn't for some weird, drug-filled liberal reason. A nice, conservative urge toward a good wholesome rural life was easily commended. Hell, it was easily commended by people on both sides of the political aisle. Plus, this meant Hollywood's "neglect of the family audience" might be ending. Williams and Hammond cite

Industry observers [who] also noted that the oldest baby boomers were going to turn 30 in 1976, and that from then on the absolute and relative size of the 30-39 age group in the US population was going to increase substantially, making it attractive again for Hollywood to pursue "a truly mass audience" of children, you and adults (Murphy 1975: 3). More generally, the 1970s saw the widespread recognition of preteen children as substantial market segment in the American economy, which was targeted by businesses with a wide range of products and services (McNeal 1992: 5-6). This in turn encouraged the film industry to make more of an effort to service children (Harwood 1975). (ibid)

Perhaps I wouldn't be the film-obsessed person I am if that wasn't the case. Right as I was born, Hollywood was actively paying attention to families and their children, when it had been neglecting them. Add to that the invention of the VCR (as we know it... or knew it; there were earlier versions of the same, but the thing we know as the VCR came...) in 1972, and the movie rental stores that sprung up in the 80s, and you really gotta wonder why everyone my age wasn't raised on movies. I mean, you've got Reagan-era end-of-the-Cold-War opulence coupled with the convenience of watching whatever movie you want at home, and there are families that didn't take advantage of that? Plus, we lived in Pasadena, which just within that city alone, there were more than half a dozen different movie theaters (only a few with more than one screen, and one of those was the cheap second-run theater I've written about in this blog before, the Academy 6), and more theaters in neighboring cities like Eagle Rock and Arcadia, Monrovia. By the time I could drive, and by the time I could see whatever movie I wanted myself, there were even more with the now nonexistent United Artist Marketplace (where I would work for a bit in when I was nineteen) and the underground AMC One Colorado, each with multiple screens. Movies became convenient, and were being more actively marketed to families and children--I'm sure I'll have something to say about the licensed toys when I eventually get to watching Star Wars (I hope) next week)--just as I was growing up. And, in the 80s, my parents were doing pretty good financially; hell, they had to be to raise seven kids. That meant spending money, that many conspicuous consumption, and plenty of ours went toward movies, rented VHS tapes or heading to the theater.

And, those movies were telling me, whether they were supposed to be or not, that scoundrels could be good people, that rebels could be right, that capitalists were bad, and that modern society wasn't all that it was cracked up to be. And, I could watch these movies over and over again at home.