And then there's Snowball Express. Dean Jones again. Disney again. And this one starts with the subversive element--Baxter (Jones) inherits a hotel in Colorado and immediately quits his office job... I'm not even sure what it is that he does. Ah, he says Indemnity and Casualty--I guess it's insurance. That's certainly not symbolic of anything. Nor is his destructive interactions with the office "computer" or the time clock. He assesses his time at the company for his wife like this:

"Yes, eleven years. And in that time I have moved up three rows, from accounts receivable to accounts payable. Honey, I feel like I'm digging myself into a hole. And today, somebody threw me a rope."

She responds: "Do you mean you're just going to give up everything and drag your family off into the wilderness?"

"Wilderness?" What...? Honey, I am taking over as the owner and the proprietor of the Grand Imperial Hotel. Does that sound like a wilderness?" He, of course, hasn't seen it yet. "Susie, this is and opportunity that comes to few men in their lifetime. To stand on your own two feet, and to... And to discover your own individuality in a world where we're all becoming... " She has left the room while he's getting into a rant. "In a world where we're all becoming holes punched in a card." He keeps talking to the dog, but the dog leaves as he keeps talking. "I want to get out of this smudge pot. Get out where the sky's blue and the air is clear and..."

Ironically--I guess--I realized this morning I barely have time for this movie today. Fortunately, it is short. I have it running while I'm doing some work for today's argument & debate class. Work getting in the way. 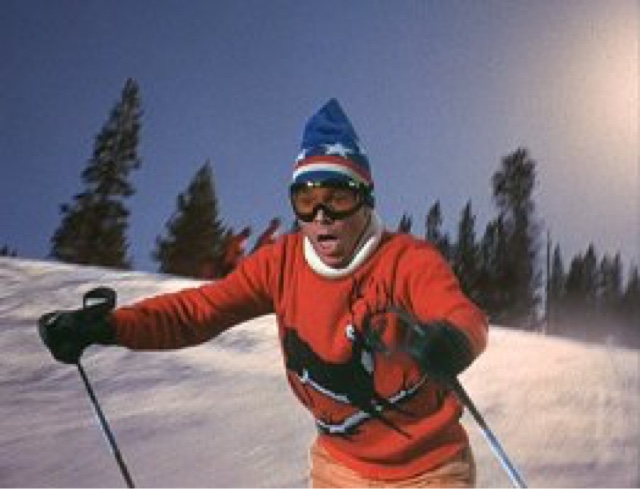 The movie subverts its own agenda, as it were, right away. Baxter imagines a fancy hotel, getting out of the rat race of the city to run it, but the Grand Imperial is a rundown thing that Chris, Baxter's daughter (Kathleen Cody) understandably balks at spending the night in. The film has essentially taken a piece of the American Dream as replacement for the office--an awesome positioning in its own right--and then forced Baxter into a corner filled with a lot of hard work. One could take the film as an indictment of 60s counterculture or at least the larger backlash to the affluent 50s. (The film came out in 1972. I'm still not even alive, but I would see this movie many times as a kid.) Leave the rat race, you still have to put in a lot of work to succeed. Freedom isn't free, and all that.

Like Blackbeard's Ghost, we've got an old drunk--though Jesse McCord (Harry Morgan) is a very different character than Blackbeard--we've got an evil moneyman interested in taking someone else's property--and here is where it gets interesting: Martin Ridgeway (Keenan Wynn) is a banker, far more legitimate than Silky Seymour (Joby Baker) there. Both films position the good people against the moneyed interests. Of course, both films have a competition on the horizon, one that can save the property in question.

For some classic Dean Jones physical comedy (involving a blue screen, and a stuntman also in this case) we get Nightmare Alley, a ridiculous--but still hilarious after all these years--ski run by Baxter, who clearly knows nothing about skiing.

Throw in some casual jazz riff-style music and the film is so relaxed it's hard to imagine a film like this existing in the present. Too many producers would overwrite too much action, include too many jokes, and make the whole thing just a bit much. As it is, though, it feels effortless.

Even when it's adding maybe one too many ridiculous ski runs. The accident with the donkey engine is almost one too many mishaps. But, the movie would be even shorter if bringing in the skiers from the avalanche-blocked train made everything okay. Hell, it might be an improvement on Blackbeard's Ghost in that (and also an echo, with two ways to win). The avalanche was no accident so taking in those passengers was cheating.

Hours later, I wish I'd written more today. Unlike Blackbeard's Ghost, for example, Snowball Express has at least one line that I reference regularly. When the drunk guy complains about there begin a fish in his drink, Jesse tells him to be quiet, because everyone will want one. One of those references that movies have stuck in the conversation centers of my mind... I will point out others in the movies to come. Tomorrow, though, I think I will watch Snowball Express again. Do I dislike capitalists because of Ridgeway's dishonest ways? Maybe. Have I only gone skiing once in my life because I fear having the sort of experience Baxter does? Maybe.

Footnote--and this one is my mother's doing, not my own--we had a Saint Bernard named Stoutheart, just like the Baxters.