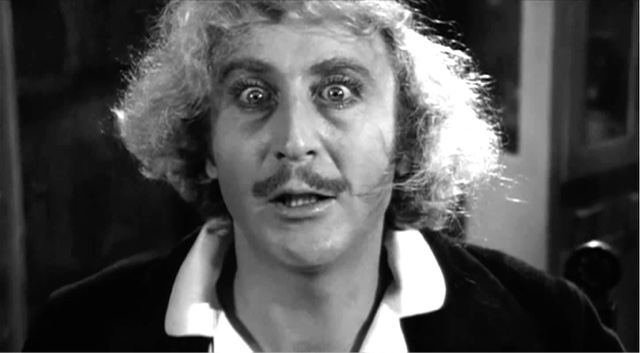 Our progress so far in this deconstruction:

(All, in theory, of course. Plus, it's basically a chicken or the egg problem; like, did I like movies about rebels and outcasts because I already had the interest, or was it my interest that drew me to such movies? Could I already imagine that monsters were human too, and that's something I liked about Young Frankenstein, or was it this movie that formed that notion within me?

Or is it all just coincidence with some of these really early films--i.e. movies made before I was born, and put to VHS in my family's house not by my choice, and not even viewed by me necessarily by my choice; I mean, I took an interest in films before I can remember taking such an interest. If there was a movie to watch, I would watch it. Didn't matter what it was about; I'd give it a shot. And, if my mother didn't already know just how adult the film might be, she might try to cover my eyes (though she usually failed, and always piqued my interest in what I might be missing. For example, when that burly Nazi gets his face torn up by that flying wing's propeller in Raiders of the Lost Ark, my mother tried to cover my eyes. This was in the theater, she didn't know what they were going to show. (And she certainly didn't know the kind of gore I would see in so many movies over the next few decades. The kind of gore I would sometimes seek out deliberately in a film.) And, on the off chance she had actually blocked my view of something--I saw the blood spatter on that flying wing's tail--I think I might have assumed there was more, that I just missed seeing a guy's face get torn up by that propeller, and I swear I remember (or maybe this memory is invented) being disappointed the next time I watched Raiders because I hadn't missed anything. It was a cheap cutaway. Well, maybe not cheap. They wanted that PG rating.

Anyway, before I got to rambling, my point was that it could just be coincidence. My personality may have formed independently of the films I got to watch, the films I would later seek out. But, where's the fun in that?

See, in theory, each film was like a building block in the edifice that was my brain. Like any lesson at school or in church, like any tv show I might watch, like any book I might read. I mean, what is the point of reading a book or watching a movie, or taking a class, if not to affect the formulation and reformulation of your thoughts and feelings? But, then again, you must remember that I don't buy into that escapism bullshit as the reason to go see a movie, even a mindless action movie. Hell, I might be the first one to argue that a supposedly mindless movie isn't mindless at all, that it has, at least in the way it invokes the sociopolitical atmosphere of it's era, something to say about the world and the people in it, even if its content seems less interested in anything beyond primal titillation. Even a bad movie can teach us something about when it was made, about who made it, about things as simple as, say, your friends all turning to vegetarianism. Or simply the monolithic nature of Hollywood and the blocks that keep some people from making it "legitimately" in film, so they turn to making films themselves, damn the budget, damn the quality, just follow your inspiration and get it done yourself.

I exited the viewing of each film differently than I entered. It's one of the theses of this blog--that film changes you and you change film, that the experience of a film is personal; sure, with a particular auteur filmmaker behind it, they might manage to manipulate the audience into thinking and feeling certain things along the way (hell, a bad filmmaker can do that to an extent, or we probably wouldn't call their product a film at all) and most of the audience will have an experience that mostly resembles the same as anyone else's. But, we bring our own mental noise into any viewing, and that affects how we take in the filmmaker's machinations, how we take in the performances. Like, Marty Feldman's innocent smartassedness--that was a performance that grabbed me when I was young. It grabs everyone, of course. Feldman is brilliant here. But, put Feldman next to Wilder's sardonic humor and it's like a lesson in how to be funny without making it look like you're trying. And, I loved it. And, whether it's linked or not, I turned into a sardonic and sarcastic smartass as I got older. Hell, I think I was a smartass well before I knew what it meant to be one. I think I discovered sarcasm before I understood more obvious means of being funny. And of being rude.

We have to take something from a film. Or forget the film entirely, I suppose. And, any film that is truly forgettable... That is worthy of the greatest of lamentations. But then, I suppose even that can tell us something about the filmmakers, about the state of Hollywood, about the world, about ourselves.

But anyway, this is all just theoretical. But, I will proclaim myself an expert in this field, because this field doesn't necessarily even exist, or didn't until now. The deconstruction of my childhood as built by film is something unique. This is my theoretical, my field. So, I am right.)

Blackbeard's Ghost taught me that anyone can be forgiven, that a man can be bad and be good, that it is good to drink and enjoy life, and that pirates are awesome and mobsters and capitalists are bad.

Snowball Express taught me that chasing your dreams is worth it, family matters, if at first you don't succeed (or a donkey engine crashing through your house), try try again, and capitalists are bad (but not too bad, because (see above) anyone can be forgiven).

Young Frankenstein taught me that being eccentric is fine; that you shouldn't worry about the haters; that you can accomplish anything with enough effort, some friends to help you out, and a castle in Transylvania and the riches that implies; and that monsters are human too (and humans are monsters too).

And, I'm not even alive yet. I've got a couple more movies to do before I get to my birth. But, these were movies we had on VHS through the 80s, movies we showed to family friends who came over for dinner and a movie (or two), or that we watched when we were bored, or just needed to pass some time.

(I will skip some movies. Some, like Halloween, I have written about in this blog before. Some just didn't seem as important when I was narrowing down my list. So far, I have skipped but one--another Disney film with Dean Jones and I figured I had enough of those on the list: The Million Dollar Duck. And that one, in retrospect, is such an obvious commentary on stuff like capitalism and and family that I've already covered in talking about Blackbeard's Ghost and Snowball Express.)